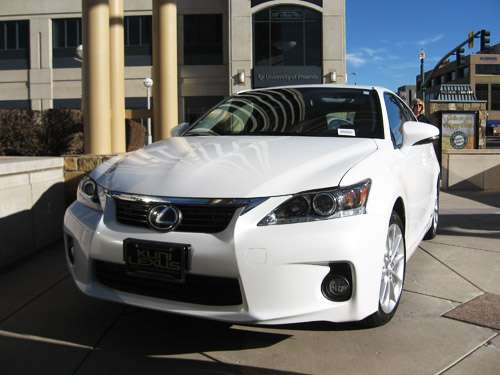 The outstandingly green commuter cars of 2012 for daily freeway drivers

Commuter cars are made for people whose primary vehicle use consists of the daily drive to and from work, which for reasons of economy needs to be more fuel efficient, even though they may be either economical or luxurious to drive.
Advertisement

The two most visible trends in vehicles last year was drivers replacing their previous vehicle with a higher mileage vehicle or a more luxurious vehicle. With the slowly but steadily rising price of gas, Torque News suspects 2012 will see these trends continuing.

The following list of vehicles includes luxury commuters, hybrid, diesel and gasoline powered cars. Since those seeking a more fuel-efficient car may be working from a variety of different criteria, this is not a ranking, but an overview of current choices in green commuter cars for daily driving.

Starting on the luxury end the Lexus CT200 is 43-mpg premium commuter vehicle with a range over 450 miles on less than 12 gallons of regular 87-octane lead-free gasoline. It has a lot of technology and green cachet for its base range of $29,120 to $31 750. It produces 134 combined horsepower from the 1.8-liter 4-cylinder gasoline engine and electric motor with three selectable driving modes and an electronically controlled CVT.

Its green cachet springs not from just its EPA emissions ratings (9/CO2 – 7/SMOG) as a SmartWay vehicle, but also floormats made 30 percent from plant based source material, speakers using bamboo-charcoal resin, as well as, fabrication processes that produce no VOCs and 65 percent less CO2. The resulting Lexus commuter car is 90 percent recyclable.

The 2012 Infiniti M hybrid is a step up in price and luxury appointment but another step down in fuel efficiency. For $65,395 you can make your daily commute in the lap of luxury while still getting 27-mpg in the city and 32-mpg on the open road. The Infiniti delivers 360 horsepower from the hybrid drive, which includes a 3.5-liter V6. This M hybrid gets a 7 score on CO2 and 5 on smog-producing particulates, but is still an EPA SmartWay vehicle. This rear-wheel drive vehicle is heavy on the performance and pampering side of the equation, but still delivers good fuel economy.

Closer to the CT200, but aimed at the more traditional consumer, the 2012 Lincoln MKZ Hybrid is a 41-mpg city commuter car with a 2.5-liter inline 4-cylinder engine coupled to an electric motor and an electronically controlled CVT. It lacks some of the luxury of the Infiniti and doesn’t have all the modern technology of the Lexus, but is only $40,735 delivered. The Lincoln MKZ Hybrid gets good emission ratings equivalent to the CT2000 and is also a SmartWay vehicle.

During the Colorado Green Car Convoy last week, the 2012 Ford Fusion Hybrid had a sticker boasting the best emission rating on any gas-burning car we’d ever seen scoring 19 out of a possible 20 – but it turned out false. It gets the same 9 on CO2 and 7 on smog as the other hybrids. There is really no way of knowing whether this was simply a clerical error or intentional misrepresentation. Regardless, it does qualify as a SmartWay vehicle.

With a starting price of just $29,570 it also gets 41-mpg in the city and 36-highway with a 2.5-liter Atkinson cycle I-4 engine and an electric motor and the same variable transmission as the MKZ.

On the lower end of price and the higher end of mileage the 2012 Prius C is selling well for exactly those reasons. The 13-foot Prius for the City gets 53-mpg in town and starts under $20K. It has the same reliable hybrid drive as the rest of the Prius family and comes in several trim levels. It handles remarkably well for its size due to the NMHD battery being moved beneath the back seat, placing its stabilizing weight below the center of gravity. The 2012 Prius C is a great commuter car for anyone who needs more economical reliability than interior space.

On the sportier side of the 2012 hybrid lineup we find the new Kia Optima Hybrid. Fairly loaded with options the 35-mpg rated sedan is priced at $32,670 delivered. It gets an 8 on both EPA emission ratings to qualify as a SmartWay vehicle. This commuter car has a lot of the same technology as more expensive vehicles including push-button start and Bluetooth plus included at the stated price the optional navigation, rearview camera, stereo upgrade, heated and cooled (in front) leather seats, sunroof and even a heated leather-wrapped steering wheel.

Last week was my first experience driving a Nissan Leaf, which seemed bigger than it looks online, was more comfortable in both front and back seats than expected and during a short figure eight through the parking lot seemed impressive. Nissan’s 2012 electric plug-in commuter car uses absolutely no gas and produces no emissions other than what its driver and/or passengers emit. It is expensive at $38,270, but with an annual fuel cost of about $600 you could regain much of that at $3 to 4,000 per year, maybe more if gas continues its price climb.

The Ford Focus SEL is a sporty gas-powered commuter car aimed at the younger consumer, getting 40-miles to the gallon in a modern tech-savvy, well-equipped vehicle. With a mileage rating of 28 city and 38 highway, the Focus also gets 14 of 20 on the EPA emission ratings. It has accomplished these remarkable stats via a redesigned 2.0-liter DOHC 4-cylinder engine, highly raked windshield and an active grille shutter system. Its highway performance seems to contradict its engine’s size and gas-sipping tendencies, in a comfortable and very user-friendly interior. In addition Ford has packed in a lot of recycled content keeping the price down to $21,300 on the 5-door SEL.

Toyota's First EV Will Have a Name of BZ: Toyota BZ
First Videos From Inside The Boring Company's Las Vegas Loop
END_OF_DOCUMENT_TOKEN_TO_BE_REPLACED