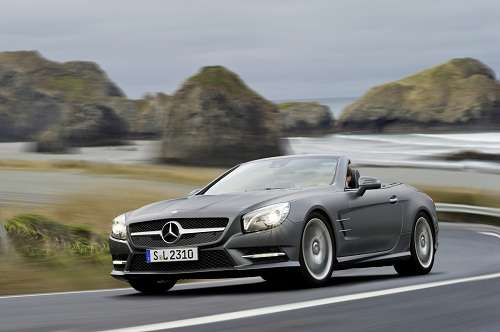 The 2013 Mercedes-Benz SL: Made almost entirely from aluminum (VIDEO)

The all-new 2013 Mercedes-Benz SL, continuing a tradition beginning a daunting 60 years ago will emerge from the cocoon, in which it has been re-imagined, next spring and with a twist, releases video.
Advertisement

(TorqueNews) - For six decades the letters designation SL has been identified with a blend of sport, style and comfort mated to groundbreaking innovation. Now for the first time, the 2013 Mercedes-Benz SL will be produced almost entirely from aluminum, weighing considerably less than its predecessor.

Its highly rigid all-aluminum body will provide a basis for agile, exhilarating handling taken to an entirely new level, coupled with outstanding body roll and ride characteristics. Enhanced driving dynamics come courtesy of a new direct injection engine, more powerful and economical than the previous generation. Other features include the Front Bass system, turning the car into a concert hall – top down or up – along with MAGIC VISION CONTROL. The 2013 SL550 will be available in U.S. showrooms this spring.

Compared to its predecessor, the 2013 Mercedes-Benz SL offers considerably more comfort and an athletic character, achieving an unprecedented level in the luxury roadster class, including amazing daily usability.

"There are around 900 million cars in the world and thousands of models, but there is only a handful of automotive icons, stated Dr. Dieter Zetsche, chairman of the Board of Management at Daimler AG and Head of Mercedes-Benz Cars. “Our SL is one of them. It has class, it has style, it is the ultimate in comfort and luxury, and it combines all that with an incredibly sporty and dynamic character. You would struggle to find a car that embodies Gottlieb Daimler's aspiration more perfectly than our new SL – the best or nothing."

The SL reported means Sporty and Lightweight, which the new Mercedes-Benz SL takes very seriously. Weight reduction is one of the most outstanding design characteristics of the new SL, as it was with its namesake, the original SL of 1952 and its lightweight tubular frame. For the first time, Mercedes-Benz has implemented an all-aluminum body in a series-production model. Only a very few elements are made from anything else. Even lighter magnesium cover panels behind the fuel tank and roof were used. High-strength steel tubing is part of the A-pillars for added safety.

The new aluminum body weighs around 242 pounds less than it would use the steel technology of its previous model. "The effect is as if a large passenger has stepped out of the car,” said Dr. Thomas Rudlaff, responsible for the aluminum shell at Mercedes-Benz. "The result is perceptible and measurable. Less weight means improved performance and efficiency. In other words, the driving pleasure increases and the environmental impact decreases."

The aluminum structure is a major improvement over the previous model's steel construction. One significant factor is its lightweight construction with certain components optimized for their specific tasks. Consequently, diverse processes are used to make different types of aluminum optimized for their specific application. The parts are made by either by chill casting or vacuum die-casting, worked into extruded aluminum sections or into aluminum panels of varying thickness. The outcome is high rigidity with excellent safety combined with low resonance and vibrations.

The new SL is even more comfortable with additional driver-assistance tech on-board than before, sacrificing a little of the weight saved. Nevertheless, the scales reveal some astonishing results - the 2013 SL550 may be the biggest loser, weighing in at roughly 275 pounds less than the previous model. Thanks to a host of other details Mercedes-Benz has included in the new SL.

A powerful engine, agile suspension
Powerful acceleration, seemingly effortless at any speed, nimbleness on serpentine roads - the new SL delivers is a sheer pleasure to drive. In addition to a powerful engine, the SL550 features sporty yet comfortable suspension. The steering knuckles and suspension arms up front are also made from aluminum to reduce the unsprung masses, like virtually all suspension components on the rear axle.

Both suspension variants are combined with a new electromechanical Direct-Steer system featuring speed-sensitive power steering and a ratio variable in tune with steering wheel angle, providing excellent directional stability and safety when traveling at highway speeds. It also reduces the amount of steering effort required in parking or other maneuvers.

The new V8 in the SL550 develops breath taking 429 hp from a displacement of 4663 cc, roughly 12 percent more, despite a smaller displacement. Fuel economy has been increased along with torque from 391 lb-ft to 516 lb-ft – a 32 percent gain. The engine features an ECO stop/start function as standard equipment, while the 7-Speed Driver-Adaptive automatic transmission has been optimized for fuel consumption and comfort.

The fuel economy of the direct injection engine does not detract in any way from the roadster's sporty character. Quite the opposite in fact - the SL550 takes just 4.5 seconds from 0 to 60 mph - eight tenths less than the previous SL550.

2013 SL: stylish interior
The 2013 SL adds a luxurious feel to its finely honed profile. Premium materials, finished with attention to detail define its style and character.
The new-generation SL is longer (+1.97 inches) and wider (+2.24 inches), with more room for increased interior comfort. Shoulder room (+1.46 inches) and elbow room (+1.10 inches) has been increased, exceeding the norm for this class of vehicle.

Clear lines create a coherent look & feel in this comfortable interior. A generous sweep of fine wood trim extends from the center console across the dashboard into the doors, creating a pleasant wrap-around effect.

A choice of two wood trims is available. Perfectly in tune with the roadster's character, the interior combines the unpretentious atmosphere of a high-performance sports car with the comfortable, stylish ambience you might expect from a premium touring car.
Design - classic SL proportions

The latest generation of the SL will spring to life with a staunch foundation in tradition, but with a whole new perspective and vision. The long hood gives way to a compact passenger compartment that is set well back. A wide, powerful rear end with a strong racing character provides the finishing touch. Just a few carefully drawn lines define the powerfully sculpted yet calm surfaces along the flanks. Finely crafted details, a striking rear-end plus ventilation grilles with chromed fins from the tradition of the Mercedes- Benz heritage evoke the SL legend.

An upright radiator grille clearly identifies the new SL as a prestigious member of the current Mercedes-Benz line. The centrally positioned star is a contemporary reinterpretation of the famous trademark, now extending into the center.

Dynamically slanting headlamps set well to the outside frame the striking front end and give the new roadster its own unmistakable face. The Bi-xenon headlamps come with active curve illumination and corner illuminating lamps as a standard feature, as well as Adaptive Highbeam Assist. With different lighting functions tailored to typical driving and weather conditions and activated in accordance with the driving situation, they offer the driver a much better illuminated field of vision. The striking sidelights and the horizontal line of the daytime running lamps in the far ends of the bumper feature LED technology.

Retractable hardtop - with optional MAGIC SKY CONTROL
The sixth generation of the SL also offers a retractable hard top that can be operated with an electro-hydraulic mechanism, transforming the SL from a coupe to a roadster in the blink of an eye. The new SL offers two versions of the top – glass or the unique panoramic roof with MAGIC SKY CONTROL. This transparent roof switches between light and dark with the push of a button. In the light setting it is quite transparent, providing a virtual open-air experience even in cold weather. When darkened the roof provides cool shade and prevents interior heating from bright sunlight. In either case, the frame is made from magnesium, reducing weight by 13 pounds as compared to other tops, thus lowering the center of gravity and enabling greater agility. Opening or closing the roof completely now takes less than 20 seconds.

The new Mercedes-Benz SL’s design is not only aesthetically pleasing, but also has outstanding aerodynamic qualities, giving the roadster top marks in its segment for three crucial areas namely: the lowest wind noise, virtually on par with a closed sedan plus the best comfort during open-air driving; meaning the roof can remain open even at high speed; and virtually no accumulation of dirt on the side windows.

LG's New EV Battery Plant Is a Welcome News for Tesla
Tesla Giga Berlin's New Hurdle: It's Not Only the Gov't, but Now Tesla Itself
END_OF_DOCUMENT_TOKEN_TO_BE_REPLACED