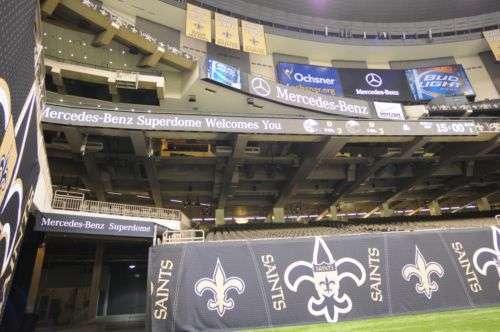 The Mercedes-Benz three pointed star will comingle with the New Orleans Saints fleur-de-lis, as the Louisiana Superdome becomes the Mercedes-Benz Superdome, thanks to a 10-year agreement providing official naming rights and other sponsorship benefits to the U.S. arm of the German manufacturer.
Advertisement

In addition to becoming the Official and Exclusive vehicle of the NFL's Saints, the renamed Mercedes-Benz Superdome will play host to several coming events including 2012 Men's Final Four and BCS Championship Game not to mention the 2013 Super Bowl.

"The joining of the Mercedes-Benz brand with the world-class Saints organization and the Superdome, an iconic destination which has undergone an incredible transformation over the past six years, is a significant moment for us, the City of New Orleans and the State of Louisiana," said Ernst Lieb, president and CEO of Mercedes-Benz USA. "Our commitment over the next decade is to the Saints fans, team, and this famous community as it flourishes beyond anyone's expectations."

Not only is this the first contract for naming rights in the U.S. by the luxury car maker, but it is also the first such arrangement for the New Orleans sports and exhibition stadium, shaking off Katrina’s infamy with a recently completed six-year $336 million renovation project positioning the stadium as a premier destination for major events not intended to include natural disasters.

"I am thrilled to be able to announce a winning and long-term partnership between the Saints, Mercedes-Benz and now the Mercedes-Benz Superdome" said New Orleans Saints owner Tom Benson. "The Mercedes-Benz brand represents the very best in its industry and we believe that is a perfect fit for this stadium, which as a result of the unprecedented and innovative renovation project recently completed is one of the world's greatest sporting venues. We felt strongly it was essential that if we were to offer the name of our building to a company, it would be one that all of our fans and the State of Louisiana would be proud of. The investment being made by a premier international brand who believes in "the best or nothing," is a tremendous compliment to all of those who worked so hard to make the stadium what it is today."

Mercedes-Benz has not disclosed how much they paid for the 10-year deal, which includes many benefits and opportunities for branding and signage within and without the newly named Mercedes-Benz Superdome. As a major bonus, the Saints print and online publications will feature Mercedes-Benz advertising and the manufacturer will have access to Saints coaches and players for special events and promotions. The company plans to create unique programs such as customer and fan appreciation activities.

"This is a great, great partnership," beamed Governor Bobby Jindal. "I know for many years there have been attempts to sell this sponsorship, and I think the restructured deal and the new Superdome are two of the reasons this is actually happening. So I think this is great for the Saints and great for the state."

In ESPN Magazine’s Ultimate Standing poll in 2010, the New Orleans Saints ranked number one among all major league sports team franchises based on what they give back to the fans for all the time, money and emotion invested in them.