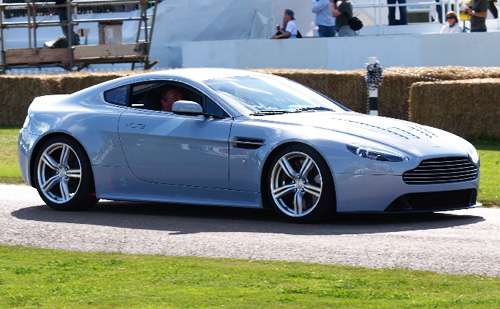 Maker of James Bond's favorite cars might be on the block

Yesterday as the latest in the series of 23 James Bond films hit US Shores, the Kuwaiti firm Investment Dar was reportedly seeking representation to sell its 64 percent controlling share in Aston Martin.
Advertisement

The designer of exotic luxury sports cars will turn 100 next year, just as their models have made a eleventh appearance in a film about the fictional British spy with a license to kill in Skyfall.

Investment Dar was one of the principals in the group that bought Aston Martin in 2007 for $805 million. The firm needs to sell their share in order to settle financial obligations according to a report by Siddharth Philip, David Welch and Jeffrey McCracken filed on Bloomberg.

Bloomberg reports that Investment Dar has hired Rothschild to advise on the sale, according to a source that chose to remain anonymous. The large Indian auto manufacturer Mahindra & Mahindra Ltd. is one of the potential investors in the firm located in Gaydon, England.

However, pundits are saying the firm may have trouble getting their investment back out of the firm building classics of the automotive world like the DB series, plus the Volante, Vantage and Vanquish. It seems the Kuwaitis want the full $800 million invested after a four-year plunge in global auto sales, though luxury makes didn’t feel the full brunt of it.

In fact, some luxury brands found new life in the burgeoning Chinese market and a new market for vehicles that loudly proclaimed newfound social status. Even Aston Martin has dealerships in Shanghai and Beijing, now claiming 120 dealers in some 28 nations.

Unfortunately, the rapid growth in Chinese sales seems to have slowed as the global economy continues to misfire with concerns about international finance and debt. In fact, this may be part of the motivation Investment Dar has in selling their interests.

“I don’t think you can truly compete without having the capabilities of a large car company behind you,” John Wolkonowicz, an independent auto analyst, told Bloomberg. “There are very few examples of sustained success without it.”

Nevertheless, the company officially denies any intent to sell. Janette Green, who is the director of brand communications at Aston Martin, flatly stated Investment Dar isn’t looking to give up their stake in the firm.

Bloomberg further reported another unnamed source indicated Toyota has done a peripheral investigation of investing in the long hallowed if frequently troubled British auto builder. The survey, reportedly completed two months ago, has not been followed up by a more in depth analysis.

The Kuwaiti firm missed a payment on an Islamic bond two years ago, agreeing to restructure $4.9 billion in debt, currently under jurisdiction of Kuwait’s Financial Stability Law, enacted in April 2009 to bolster financial institutions damaged by the global credit crisis.

Remarkably, Aston Martin is the world’s only luxury brand that is not part of a larger auto group, even though it still gets engines from Ford, who retains a $77 million (in 2007) stake in the luxury brand.

Going it alone could definitely be a disadvantage for the manufacturer. Look at the money Ford, GM, Chrysler, Volkswagen, BMW and Mercedes Benz are spending to develop more fuel-efficient engines. BMW spent more than $1.3 billion to engender such innovation just last year. That amount clearly dwarfs the entire annual revenue of Aston Martin in 2011 at 507 million pounds.

Innovation, research and development are costly undertakings and a larger umbrella group can spread those costs over a range of brands and models. Maserati, Alfa Romeo and Ferrari are owned by Fiat, whose support seems to even benefit the Chrysler Group. Audi, Bentley, Bugatti, Lamborghini and Porsche are all owned by the Volkswagen Auto Group, giving all those brands the same benefits of a big brother to help pay the bills.

So as the 50th Anniversary collection of Bond films comes out on Blu-Ray and the august auto manufacturer nears its 100th anniversary, why shouldn’t Aston Martin enjoy the same advantages as all those other luxury brands?

After reading Bloomberg’s report, one could conclude this is all just rumor and speculation with fair reasons for thinking so. Conspiracy theorists would suggest the news source is part of the Multinational Overlord Network and maybe they are just testing the waters to see whom they can interest in an orphaned luxury exotic sports car maker. Maybe they are just trying to see how much the firm is really worth or trying to seed interest.

Whatever your perspective on the report, Torque News thinks Aston Martin should survive under the wing of a major auto group, if for nothing more than the future’s sake.

Sooner or later, we’ll all have personal conveyances that are not only autonomous, but also capable of flight. When that happens, at least one model should bear one of the coolest automotive logos ever to grace a hood – the wings that proudly proclaim a car to be an Aston Martin.

It’s possible when cars become autonomous, the skies will become the only place an enthusiast still gets to control a vehicle – let’s save the brand for our grandchildren to relish, as we did in the days of old and still do today – in whatever form it evolves into.