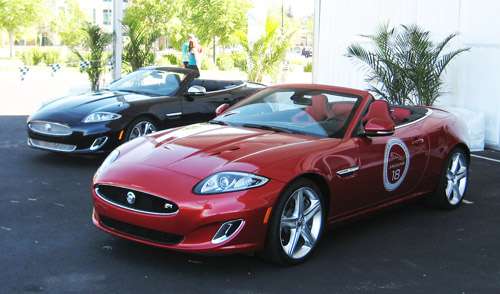 Jaguar Alive brings so many Jaguars, but so little time

Jaguar Alive brought various trim and performance levels of their XJ, XF and XK vehicles to Denver this weekend and will take the show to Seattle June 21-24 and San Francisco July 19-21, with further events in the works for Ft. Lauderdale, Orlando and Tampa as well as Charlotte later this year.

Before getting to the cars, attendees were treated to a brief though enjoyable presentation of coming Jaguar products including the C-X75 concept, the well-received hybrid supercar the brand is developing along with Williams F1, the visionary C-X16 that seeks to set the bar for the sports car of the 21st Century, and the much ballyhooed Jaguar F-Type.

Then the group of 20 was ushered outside to pick from over a dozen XJL models, before driving them two laps around Sports Authority Stadium, on the streets near where the event was staged.

This sufficed to demonstrate how the Jaguar suspension delivers an unblemished, porcelain-smooth ride until the big cat is pushed to let its powerful sinews show their stuff. Though the city streets surrounding the Bronco’s home stadium have residential speeds, the experience provided interested parties a brief glimpse of the supple power lying beneath the XJL’s idle purr.

Next during the Jaguar Alive event came a series of painted parking lot and pylon-outlined courses – also aimed at revealing the various features of each model and trim levels. Taking an easy driving route allowed the onboard Jaguar rep to demonstrate or simply describe several standard features such as the paddle shifters, touchscreen video display, it’s Bluetooth connectivity and other telematic features as well as the vehicle’s winter mode.

On a slippery surface, created by something like an industrial Slip N Slide, the rep first turned off all the traction and stability systems, and instructed us to punch the accelerator. The car went virtually nowhere on the watery plastic except for the rear wheels sliding a bit to the right. Turning the traction and stability systems back on, we also attempted over-acceleration – the car went slowly, straightly ahead despite the driver’s poor reaction to the conditions. That’s how cars begin to think for us – noticing our stupidity and refusing to comply with illogical commands.

Similarly we learned the paddle shifters won’t let you go the wrong way with sequential shifting – it won’t slap your hand but it won’t take commands that would endanger the Jaguar’s 5.0-liter V8 heart.

This was all referred to as the Technology aspect of the Jaguar Alive driving experience.

Next it was on to the Refinement section where we began by driving an XK convertible about a track that showed how well the Jaguar performed on uneven, pock-marked or even washboard surfaces – an excellent simulation of what it’s like to drive a car on winter, bus and construction-ravaged city streets. Suffice it to say we could have taken this course with Grandma’s goldfish bowl in the seat beside us without spilling a drop or distracting her bug-eyed Fantail from its fishy pursuits.

The second part of this portion of the trial provided the chance to safely give a 550 horsepower supercharged XKR the reins as we accelerated flat out in an idle-to-60 exercise. With the extra oomph of the supercharged model we got up to over 70 in the amount of track the other Jags need to reach 60. For the record the base model develops 385 horsepower and does zero to 60 in 5.4 seconds. The XKR-S has a factory stated zero-to-60 time of 4.2 seconds.

The final aspect of the Jaguar Alive event was a short, winding time trail, which everyone was timed on after a couple of test laps and a bit of instruction on track driving both before and during the practice runs. My time was 29.53 seconds, which is not a good score. About 25 seconds is a good score according to the professionals on hand.

We heard that one of these Jaguar drivers took a car through this track in reverse the night before, beating 25 seconds without even wobbling a cone. This was done by a true professional, kids – obviously bored with driving these courses in drive – so don’t try this at home.

All in all, Jaguar Alive is to be congratulated for producing a fun, engaging event, especially for the potential buyer who set out to take a certain model for a more grueling test drive than they’re likely to get a most dealers and also compare models if there are still waffling between this Jag or that.

Information on all of the coming events, models and specs for the exciting Jaguar lineup is available at JaguarUSA.com.

Get out and take a run through the urban jungle in one of these sophisticated beasts. Big cats may not change their spots, but they just keep getting better.