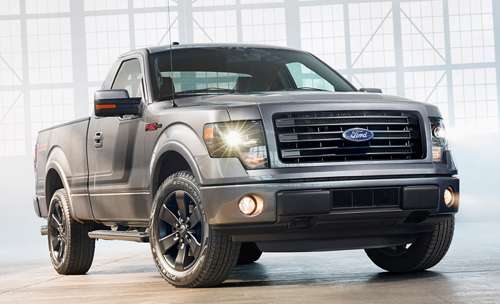 As a truck enthusiast from birth, Brian Bell has worked in Ford’s F-150 division for six years and is considered the father of the brand’s new 3.5-liter EcoBoost powered F-150 Tremor.
Advertisement

During a Web chat hosted by Edmunds.com during last August, Bell reveals the facts, features and a secret or two about the exiting new pickup model. As the Marketing Manager for the F-150 line and creator of the new model, he’s privy to pertinent information.

First, let’s review the common knowledge. The F-150 Tremor delivers the power of a V8 with economy of a V6, thanks to the twin turbocharged direct injection EcoBoost engine, channeled through a 4.10 rear axle with an electronic locking differential.

With its short wheelbase, regular cab and FX trim and features, the Tremor has a striking appearance especially after the Tremor graphics are added.

The F-150 Tremor is Ford’s only regular-cab with a flow-through center console and bucket seats. Other interior amenities include black leather seats with contrasting red piping, matching steering wheel, brushed-metal accents plus the added texture and style of Alcantara seat inserts.

“The new Tremor gives F-150 customers yet another option to drive a highly capable, distinctive performance truck with features typically found only in the aftermarket,” said Brian Bell, F-150 product marketing manager. “Plus, the Built Ford Tough EcoBoost engine is available for the first time in a short-wheelbase F-150.”

So why is it called Tremor anyway?

“Tremor was a name specifically used for past specialty models,” said Bell. “When we developed this truck we felt it fit the mold of this vehicle perfectly.”

The EcoBoost engine in the Tremor delivers 365 hp at 5,000 rpm using regular fuel.

“The 365 hp and 420 ft.-lb of torque ratings our rated on regular 87-octane gasoline, however customers looking for some additional punch can put premium fuel in,” Bell replied to a query about fuel grades.

Was it based on the Lightning or Raptor in any way?

“SVT developed the Lightning as a high-performance on-road vehicle with unique engine and suspension components that set it distinctly apart from the rest of the F-150 lineup,” Bell continued. “We’ve had a lot of requests from customers asking for a short regular-cab EcoBoost powered truck, and this fits the bill perfectly. Raptor is a very successful off-road truck built by SVT, but Tremor fills the need in the marketplace for a sporty street truck – we know Tremor will meet that need.”

It will come with optional spray-in or drop-in bedliners and will be built exclusively at the Dearborn plant this year.

What colors will it come in?

Sorry no green, orange or purple.

“Tremor is very well equipped from the factory. In addition to our 3.5-liter EcoBoost with 420 lbs-ft. of torque, Tremor also includes HID headlamps, MyFord Touch with an 8-inch high definition screen in the center stack, 4.2 inch productivity screen in the instrument cluster, power bucket leather seats with alcantara suede inserts and a flow through console with floor shifter. Outside, it has 20-inch matte black wheels with Pirelli tires. Also includes the trailer-towing package. And, we also have our 4.10 e-locking rear diff. In short, Tremor is loaded with great features and performance!”

If you want to see it in action or up close, you’ll have two opportunities this weekend.

“Be sure to look for it this weekend during Saturday's NASCAR Truck Race and all weekend at the Woodward Dream Cruise,” Bell concluded.