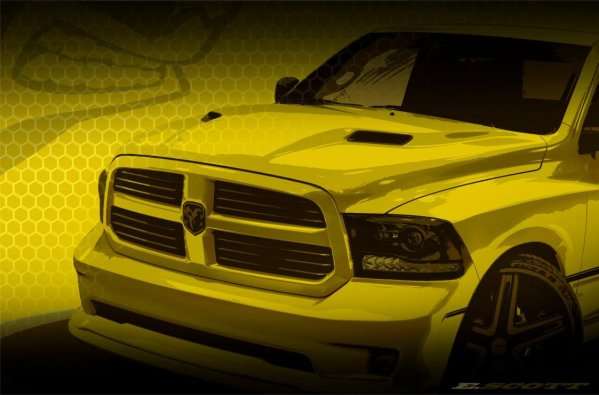 The Chrysler Group has just offered up a pair of teaser images of the mysterious Ram Concept Truck that will debut at 10am on Saturday at the Woodward Dream Cruise and from these two images it is pretty clear that this concept is the next generation Ram 1500 Rumble Bee.
Advertisement

Now, if the Chrysler Group had only offered up the closely cropped image of the 2014 Ram as shown above, we would only be speculating that this concept vehicle is the next generation Rumble Bee. The honeycomb design on the left side of the image combined with what appears to be the angry grimace of the Rumble Bee logo (and the fact that the entire image is yellow and black) would make it hard to guess that the Saturday debut could be anything else but a new Rumble Bee. However, the second image (below) showing the 2013 Ram 1500 shift knob featuring a bee on a gold honeycomb backdrop and the fact that there is the word “Rumble” above two interesting buttons removes all doubt that this is anything other than the new Rumble Bee.

The original Ram 1500 Rumble Bee was offered in 2004 and 2005 with all of these insect themed trucks being based on a Ram SLT short cab/short bed configuration. The Rumble Bee name was a play on the Super Bee performance packages of the 1960s and 1970s (and then again on the new Charger SRT8), with 8,700 made and sold during those two years of production. These original Rumble Bee pickups were all powered by a 5.7L Hemi mated to an automatic transmission and 3.92 gears with the buyer’s choice of rear or four wheel drive. Technically, there were no performance features added to the Rumble Bee package back then but with a striking exterior design featuring a sporty body kit, a Mopar exhaust system and the familiar Rumble Bee tail stripe – these trucks were popular then and they are still popular today among the Mopar faithful. Should the 2014 Ram 1500 Rumble Bee Concept truck that will debut this Saturday at Detroit’s Woodward Dream Cruise follow those same lines, we can expect that it would be powered by the same 390 horsepower Hemi as the rest of the current Ram 1500 lineup. We can tell from the picture that the new Rumble Bee has what appears to be the front bumper and the power bulge hood of the R/T package with wheels that look to be unique from the R/T package – and possibly a bit bigger. Based on previous Ram 1500 concept vehicles, I would guess that this truck will ride on a set of 22 inch wheels. Of course, there is also the bright yellow paint scheme with black accents on the mirrors, the grille and the wheels.

The most intriguing aspect of these first two Ram 1500 Rumble Bee Concept images is the one showing the bee-clad shift knob. Below that knob there is a pair of buttons with “Rumble” above them and each button appears to have a crude drawing of a human ear with what I would guess to be sound waves around it. It looks to me like the driver will be able to select just how much rumble they want from their Hemi V8 so this truck could have non-production friendly cutout exhaust or a dual mode exhaust system that uses baffles to muzzle the engine a bit when you don’t want to wake up the neighbors.

Again, what I believe to be the new Ram 1500 Rumble Bee Concept is set to debut this Saturday at the Woodward Dream Cruise in Detroit. Those of you who cannot make it can be sure to find a full rundown of the new Ram Concept along with live images from the unveiling. Stay tuned!