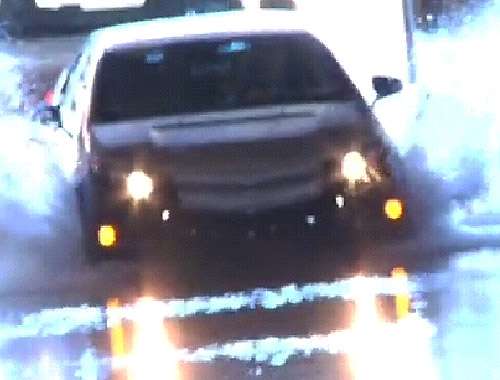 Post impact fires reported by the NHTSA have had the Chevy Volt recently living under a cloud, so researchers for the brand are testing to see if the batteries will maintain integrity if that cloud releases a downpour, subjecting the vehicle to flooded highways or intersections.
Advertisement

We all know that water and electricity don’t mix very well – that’s why you don’t leave your hairdryer or radio plugged in and sitting where it could fall into bath water turning the bather into a crispy critter.

The same problem applies to electric cars if they get into conditions so wet the car’s battery system could short circuit creating a fire hazard. If inadequate seals allowed such shorts to occur in a car with a gasoline generator, the possible ramifications could be quasi-catastrophic.

That’s why Chevrolet engineers are purposefully driving Chevy Volts through a water trough some three or four car-lengths long and apparently a foot deep in aqua – just like some of those intersections or stretches of highway you know and try to avoid in a cloudburst.

Chevrolet is just as concerned with all this as any customer might be and is following up testing done on the battery shell itself some six months ago at the Milford MI Automotive Proving Ground’s Water Laboratory. Data derived there and at the Battery Development Lab in Warren MI was provided to project developers whose resulting modifications have been incorporated into the Chevy Volts currently being tested.

“The reason we have done all this testing is to verify and assure the customer is protected from any water intrusion into the battery, which could affect the electronics, causing a short or an isolation fault,” said Chevrolet Battery Development Engineer Rob Drexler. He added three or four backup systems are already in place to protect the battery if it gets wet.

The tests involve driving the cars through the water trough several times and an additional trial wherein the Volt is driven into the water, stopped momentarily and then backed out.

Additional circuits were installed within the battery pack so they can be checked after each trial to see if the battery has been affected by testing resistance through the extra circuits. If water has entered the sealed system the registered resistance should be different.

After the set of trials is completed for each model in the test group, the battery packs will be opened up to confirm the water integrity of the unit has been undeniably maintained.

“We set pretty stringent requirements and specifications for acceptable water intrusion levels in the test packs, so we will tear them down and visually inspect them to make sure our detection system is working,” Drexler added.

Back in college, did anyone tell you it was possible to make a living as a “Splash engineer?”

The level of testing that goes into the development and testing of new automotive products is staggering. Kind of makes you wonder where all the recalls come from? How did these defects make it through the tests in the first place?

The answer to that frequently goes back to secondary and tertiary suppliers, like a recent issue with brake fluid bolts that could fail spilling battery fluid on sensitive parts or a recently discovered fault in the wiring of certain coolant pumps that chill turbochargers. Both are parts supplied by auxiliary companies rather than the design or fault of the manufacturer directly.

Consequently, it is likely testing will eventually extend beyond the cars themselves to the companies who supply components to the OEMs. After all, recalls can be an expensive if unintended consequence of defective parts in both dollars and prestige.