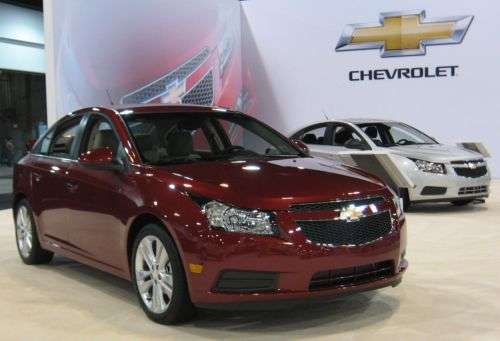 In a somewhat inspired bit of marketing savvy, Chevrolet has begun installing solar powered Green Zone charging stations for the Volt, which will also create spare power for the dealer. The solar units will generate enough power daily for 12 full vehicle-charging sessions.
Advertisement

"The Chevrolet Green Zone will provide our U.S. dealers with added flexibility when it comes to charging their vehicles, while also reinforcing GM's commitment to renewable energy projects," said Chris Perry, vice president, Global Chevrolet Marketing and Strategy.
American Chevrolet in Modesto, Calif., and Al Serra Auto Plaza in Grand Blanc, Mich., are the first to have these stations underway.

"The question isn't whether to install a solar canopy, it's where and how many," said Joe Serra, president of Serra Automotive. "It's a win for us because the electricity generated will help reduce operating costs, and it's a win for the environment since solar power helps reduce our carbon footprint."

Each canopy generates enough electricity for up to 4,500 charges per vehicle annually. The testing prototype for the Green Zone project is housed at the Detroit Hamtramck assembly plant, home of the Chevy Volt.

"The beauty of this program is that there is no capital cost required from the dealership," said Dave Halvorson, president of American Chevrolet in Modesto. "Not only do we generate the solar energy to increase our reliance on renewable electricity, but the Green Zone is a billboard of our commitment to the environment."

The move to install the canopies is part of GM Ventures' recent announced investment of $7.5 million in Sunlogics, a solar panel manufacturing and development company who will supply the panels and install the dealer charging stations. Both dealerships partnered with Sunlogics for installation of their Green Zones.

"Just one of these canopies provides enough renewable energy to power two to three homes per year, or more than 25 percent of a dealership's energy consumption," said Perry. "Collectively, that will be a lot of power we are putting back into the grid."

General Motors derives 1.4 percent of its U.S. energy consumption from renewable resources and is committed to doubling its solar output globally – from 30 megawatts to 60 megawatts by 2015.

The brand has three of the largest automotive rooftop solar power installations in the United States, and the world's largest rooftop solar installation at its car assembly plant in Zaragoza, Spain. Additionally, GM has started construction on a new solar field at its Detroit-Hamtramck facility and completed construction on a solar array on top of its Baltimore Operations facility.

The future’s looking sunny for the owners and dealers of the Chevy Volt.

Steve wrote on August 3, 2011 - 2:39pm Permalink
Don- It's nice to see Chevy is really taking solar seriously. I'm glad to see someone trying to kick solar into an even higher gear. The term 'solar canopy' was new to me. I thought that their canopy would provide more power. I figured 4,500 charges would be more power than what is required by 2 - 3 homes per year. Chevy's Green Zone seems very promising. I haven't heard much recently about the Chevy Volt, and I don't really understand how a charging station at each dealer will increase Chevy's current standings in the current <a href="http://www.cargamesrpm.com/">car games</a> being played out in the US. Hopefully electric vehicles become more popular in the US. I would be a much need relief on our natural resources. -Steve
Installing sola... wrote on August 18, 2011 - 1:49pm Permalink
One of the first items that campers might want to consider is a solar powered backpack. <a href="http://www.morrisseysolarenergy.co.uk/">Solar power</a> is a non-conventional energy source that has immense potential to replace the more traditional forms.. Nice review...
rolurateam wrote on August 22, 2011 - 1:27pm Permalink
This car are being in the passer at the best car in the world, but when the car are devellped they run in a spirale.. But they run so nice also ^^ Best, <a href="http://www.jeu-flash-gratuit.org">jeux flash gratuit</a>