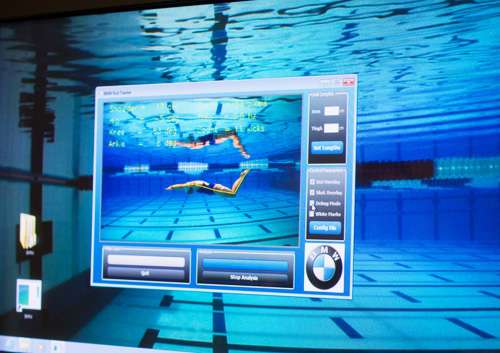 BMW sensors and software developed for automotive functions are now helping the US Olympic Swim Team by analyzing their startup and turning underwater, a critical aspect of the competition measured in hundredths of a second.
Advertisement

BMW, as the Official Mobility Partner of the United States Olympic Committee, just announced the delivery of the second vehicle-to-athlete technology transfer project, a unique motion tracking system that can help refine a swimmer’s form and technique. The system, provided by BMW to USA Swimming (USAS), utilizes underwater cameras along with BMW automotive technology to provide data to coaches to help swimmers improve starts and turns.

The technology was researched and developed at the BMW Group Technology Office in Mountain View, CA to analyze a swimmer’s dolphin kick allowed within the 15 meters of the pools edge and provide exacting performance data to participants and their mentors. Similar to the body capture technique used in film but more precisely focused, the software follows six body points of swimmers – wrists, shoulders, hips, knees, ankles and toes – allowing coaches to analyze the coordinated actions of different parts of the body, and thus modify the way they work together to increase speed and efficiency.

The system represents a quantum leap over the current method of counting strokes and kicks and making assumptions from underwater video footage. By comparing measurements to performance over time, coaches will be able to use BMW’s motion tracking tool to fine tune incremental technique tweaks that will work for each swimmer’s best body characteristics and performance.

Such infinitesimal modifications pay big dividends in elite swimming where a .01 second makes the difference in winning gold and going home in tears. BMW’s technology can significantly help a swimmer’s training focus and improve their final times.

“Watching our best swimmers, it’s clear that the dolphin kick is a very powerful stroke that is critical to overall performance in a race,” said Russell Mark, National Team High Performance Consultant to USA Swimming. “However, one challenge our coaches face is the lack of a clear understanding as to which movements and techniques promote the strongest dolphin kicks. This tool will help us identify and teach those ingredients.”

After the London 2012 Olympic Games, USAS will continue to analyze and archive dolphin kicks by capturing the training sessions of strong performers who come through the U.S. Olympic Training Center in Colorado Springs, CO. As this data is collected and examined, achieving an emergence of gold standard criteria, coaches will be able to identify the changes swimmers need to make to reach their highest personal potential.

The software BMW uses in both training tools is similar to that in the works for driver assistance systems in future generations of BMW vehicles.

This technology initiative is part and parcel of BMW’s US Olympic program that endeavors to advance the performance of Team USA and bring communities nationwide a little closer to the Olympic Games.

“We’re quite pleased to have been able to develop two new training tools for the athletes of Team USA this year,” said Dirk Rossberg, Head of the BMW Group Technology Office USA. “What’s also interesting is that, in working so closely with USA Swimming and USA Track & Field, we’ve been able to bring key pieces of information back to our research and development of vision systems. It’s a partnership in the truest sense of the word.”