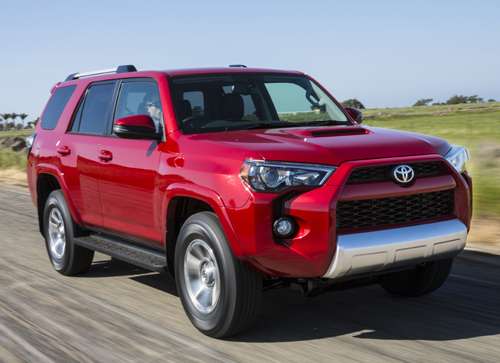 The 2014 Toyota 4Runner pays tribute to its rugged 4bearance

The rugged Toyota 4Runner will mark its 30th year of production next year, and in honor of that milestone the exterior of the refreshed 2014 model is showing off the DNA from its rugged heritage of offroad performance.
Advertisement

While the exterior lets it’s rugged persona shine through, the interior reveals a refined inner self – so while you’re fording streams or climbing rock piles, you can still remain somewhat insulated from the convoluted terrain you’re crossing.

Combining body-on-frame construction with comprehensive suspension technology, the new 4Runner delivers excellent offroad along with a smooth ride and the comfort usually associated with a crossover. The 2014 4Runner comes in three trim levels including the basic value-driven SR5, the upgraded Limited, plus a Trail grade model for serious bushwhackers. Third-row seating comes optional on SR5 and Limited models allowing for up to seven occupants.

It comes in rear wheel 4x2, part-time 4x4 or a full-time multiple mode 4x4 with locking center differential. All models feature the 4.0-liter, 270-horsepower V6 teamed to a five-speed ECT-i automatic transmission in one of few vehicles still offering a transfer case.

4Runner’s Refreshed Exterior has a front end suggest a hound’s snout hot on the trail of adventure – with its elongated headlamp eyes bracketing a triple-oval Toyota snout centered between wide nostrils over a wide dark grille maws.

The red-coated image pictured here readily suggests a bloodhound on a quest for the wonders of the road much less traveled – not to mention the places no road would ever venture.

Backwards from the midsize SUV’s countenance are ready access ports over step-up running boards; while top mounted roof rails signify its readiness for deployment on the road to Denali National Park or the rugged terrain of the Sawtooth Mountains of Idaho.

The Limited model gets a wider chrome bumper extending to housing of the integral fog lamps and a chromed crosshatch grille.

SR5 and Trail models feature 17-inch wheels while the Limited rides on big 20-inch rims. Show a true bent for rough travel, all models still come with a full size spare tire. If you’re navigating four-wheel routes through the Collegiate Peaks, one of those little temporary doughnut-wheels just won’t cut it.

Headlamps on all models have switched from halogen to projector beam and LED lamps in both front and rear clusters.

Of course, you have a choice of colors that runs from Super White to Attitude Black, Barcelona Red, Nautical Blue, Classic Silver and Magnetic Gray Metallics – in addition to Blizzard Pearl and 4Runner Black.

One or the other is sure to match or mask the rain-spots or mud-tones in whatever region of the country one lives – from the Everglades of Florida to Olympic Rainforest in Washington – from the rocky promontories of Maine to the fine blond sands of San Diego.

Perhaps one would simply match the color of your inner Junior Woodchuck’s electromagnetic aura emanations.

A Comfortably Connected Interior
While both the SR5 and Trail grades have added Soft Touch door trim as a standard feature, the leather-wrapped wheel and shift knob imbue a premium touch to the mainstream brand.

A bright new Optitron instrument panel with excellent visibility houses the expected gauges, plus a multi-information data display. An economy feedback system let an operator monitor fuel consumption when range and refueling or simple budget concerns are of importance.

On the 2014 4Runner Trail model, an overhead console places the off-road control switches in and easily accessible position. A compass indicator and outside temperature display add functionality and relevant data to cross country orienteering and overnight outing off the grid. Only the Limited features an automatic dual-zone climate-control system.

Second-row passengers gain needed additional knee space from a sculpted seat back in front. The second-row seats recline up to 16 degrees in four steps and feature a center armrest. The 40/20/40 second-row seat configuration also allows one-touch access to the third row easy.

New for the 2014 Toyota 4Runner is a standard eight-way power driver’s seat.

Power, Torque and Economy
The 4Runner’s 4.0-liter V6 generates 278 lb.-ft. of torque optimizes across the operating range Dual independent Variable Valve Timing with intelligence (VVT-i). Despite the horsepower and torque ratings, the 2014 4Runner gets 17 mpg city and 23 mpg highway for 4x2 models and only marginally less on four-wheel-drive models, rivaling many lighter crossover SUVs. Maximum towing capacity is still 5,000 pounds with an integrated tow-hitch receiver and wiring harness as standard equipment.

Smooth Performance On and Offroad
Thanks to double-wishbone independent front suspension, complimented by variable-flow rack-and-pinion steering, the SUV delivers precise steering on the most uneven and obstacle ridden roads. Coil springs over gas shocks on all wheels produce a comfortable ride and handling that’s easily controlled. Off-road axle articulation is optimized by the four-link rear suspension that still delivers a smoother ride for rear-seat passengers both on and off the road.

The Limited grade has an X-REAS suspension system to improve performance, comfort and control. The system allows the 4Runner to corner flatter while handling choppy pavement better by adjusting damping force on bumpy surfaces. Using a center control absorber to cross-link shocks on opposite corners of the vehicle, the suspension greatly reduces pitch and yaw via opposing inputs.

The A-TRAC traction control system comes on all 4x4 models, distributing drive to any one wheel with traction, making terrain irregularities and slippery surface virtually unnoticeable to the driver.

Toyota’s Crawl Control feature comes standard on the Trail grade, enforcing an appropriate speed for vehicle control while minimizing the load on drivetrain and suspension components.

When engaged, the CRAWL system regulates engine speed and output, braking force for forward or reverse progress in five selectable low-speed settings, allowing focus on steering on rough ground or steep grades without having to worry about the throttle or braking.

The Trail grade also features a Multi-Terrain Select system that dials in wheel-slip control to match the terrain, whether Mud and Sand, Bumpy Moguls or Solid Rock.

Hill-start Assist Control provides additional control hold the vehicle stationary after releasing the brake briefly when starting up a steep incline or slippery surface. All models also feature standard Downhill Assist Control, augmenting the low-speed ascending ability of low-range to hold the vehicle back from overly rapid descents without over dependence on braking.

New Safety and Convenience
Seats fold flat without folding or removing the head rests and can be manipulate from the side doors or rear hatch. All windows including the cargo, moonroof and door windows are jam proofed.

Front and rear proximity sensors are also standard on Limited models, plus a rear-view camera is now comes on all 4Runner models.

Naturally it includes the Toyota Star System of stability, traction, braking, passenger protection and so forth. The higher end Safety Connect services are optional and include automatic collision notification, SOS, vehicle location and roadside assistance.

Though pricing information is yet to be announced, the refreshed 2014 Toyota 4Runner would appear to be much more than a pretty face. It seems a value laden, economical, high volume transporter for those who need to deal with the Rocky Mountain region. We must also include those who like a vehicle to get them away from the bustling crowds and to the rare places few others go.

We sincerely hope the new 2014 4Runner can make an appearance at the 2013 RMAP 4XFall event. We’d like to get to know it better.