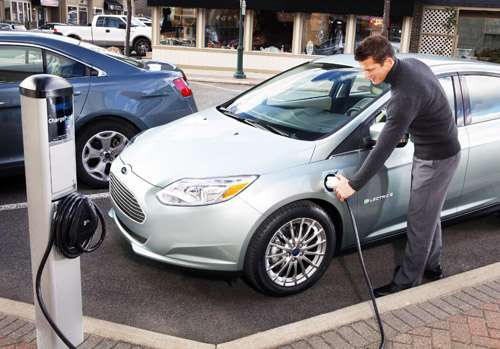 2012 Focus Electric the Ford of the future with Microsoft app

Ford and Microsoft are appearing at this week’s Future in Review Conference to showcase how the 2012 Focus Electric can help address future global transportation challenges with the MyFord Mobile app.
Advertisement

For example, owners will be able charge the Focus Electric twice as quickly as a Nissan Leaf thanks to a higher-capacity onboard charger. MyFord Mobile users gain the ability to monitor charging, get timely alerts, find charging stations, logistically plan trips and even more using their smartphones or notebooks, making the shift to an electric vehicle lifestyle seamless.

The 2012 Focus Electric is among America's most fuel-efficient five-passenger vehicles with an EPA defined equivalent of 110-mpg while delivering more power, passenger room and standard features than can be currently found on a Nissan Leaf.

Marking the arrival of the first 2012 Focus Electric models at dealerships, Ford and Microsoft executives are pointing out the car's smartphone and recharging technologies as the type of innovation needed to address the challenges of transportation in a world of shrinking resources, congestion and over-dependency on oil.

The Future in Review Conference is a forum discussion of even larger issues such as global gridlock – an obvious result of unchecked population and vehicle ownership growth.

"Ford and Microsoft continue to demonstrate the importance of marrying automobiles with creative technologies such as the features built into SYNC and MyFord Mobile that help people stay connected to their digital lives," says Sheryl Connelly, Ford Global Trends manager. "These innovations will be even more important in a future where urbanization and growing vehicle ownership could literally grind major cities to a halt around the world."

Together, Ford and Microsoft released the first generation of SYNC in 2007, in an attempt to create an enhanced automotive experience through the Ford SYNC software. The program has been a hit since the initial version launched and now more than 4 million Ford vehicles are on the road equipped with SYNC.

"Microsoft technology is opening up new possibilities for the connected car in areas that both augment and transcend today's systems," added Ben Smith, director of program management for Windows Embedded at Microsoft. "From using simple voice commands to navigate to the nearest coffee shop or manage the interior temperature, to using the vehicle's on-board technology to find the most economical place to charge up, Microsoft and Ford are changing the way people interact with their vehicle."

SYNC is just one of the technical features on the emission-free 2012 Ford Focus Electric shared across the Ford electric and hybrid vehicle lineup. SYNC with MyFord Touch offers many ways, including vocal commands, to manage and control phone, navigation, entertainment and climate functions. Both their plug-in hybrids and all-electric models also have ways to monitor information such as the battery’s power level.

In addition, 2012 Focus Electric owners can use the MyFord Mobile, smartphone app or online interface to perform key tasks, such as monitoring the vehicle's power level or range, finding charging stations and helping to plan routes.

Value Charging is an aspect of the cloud-based app keeping track of local utility rates. This feature allows owners to charge their vehicles at the cheapest utility rates when providers switch to off-peak rates, helping to minimize costs.

Without ever a care about when the rates change, owners can use a single setting in the app and then plug in their cars. The network will monitor the utility rate, automatically telling the car to “get some,” when the rates go down.

The app is available for most major smartphones including Android, BlackBerry and iPhone, or online for other platforms and a secure Ford website, as well.

Retail production of Focus Electric began this month at Ford's Michigan Assembly Plant in Wayne, MI. First available in California, New York and New Jersey, the 2012 Focus Electric will soon be available in 19 markets across the U.S. and nationwide by the end of the year.

Toyota's First EV Will Have a Name of BZ: Toyota BZ
First Videos From Inside The Boring Company's Las Vegas Loop
END_OF_DOCUMENT_TOKEN_TO_BE_REPLACED