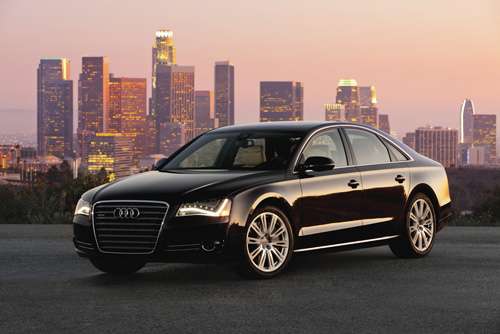 The 2012 J.D. Power and Associates APEAL study, released just today, named the Audi A8 the most appealing large premium car as well as the overall best performing model considered.
Advertisement

The study measures how gratifying – what you might call “the bling factor” – of a new vehicle’s ownership and, not surprisingly, two Audi models received high marks.

In fact, the A8 received the highest score of any vehicle in the 2012 study. The survey respondents also named the redesigned Audi A6 as the most appealing model in the midsize premium car segment.

In total, Audi’s scores in the APEAL study improved 13 points from their standings in the 2011 results, revealing an immediate payoff to the brand strategy’s of providing the most technically advanced lineup in the luxury car market to U.S. consumers.

Audi edged up one position to rank 4th out of the 34 nameplates in the J.D. Powers study. This is the 17th year for the US Automotive Performance, Execution and Layout (APEAL) Study SM, that surveys owners’ regarding the design, content, layout and performance of their new vehicle during the first 90 days of ownership.

“Audi products have become the envy of the luxury automotive industry,” said Scott Keogh, President, Audi of America. “This is a result of our unwavering focus on developing premium vehicles that are intelligent in design, progressive in technology, and exceptional in performance. According to the 2012 J.D. Power and Associates APEAL Study, consumers are recognizing this as well. There can be no question that Audi has the right lineup for these times.”

The 2012 Audi A8, flagship of the brand, is known for its superlative and progressive advances in engineering, technology and performance. With a score of 902, the A8 received the APEAL award in the Large Premium Car segment. It was the highest-performing model in the study – a first for Audi in the history of the survey. Personally, the 2012 Audi A8 is the most technologically advanced vehicle we’ve experienced.

Thanks to the innovative Audi connect system that offers Google Earth, Google Local Search, casual speech Google Voice Local Search, real-time weather, fuel prices, news and travel information, as well as Wi-Fi connection for up to eight devices, it is little wonder the A8 received such high marks from APEAL respondents.

Audi is the only brand in the world offering factory-installed wireless Internet in core models, such as the Audi A4, Audi A5 and Audi Q5.

The 2012 Audi A6 received the highest ranking for the Midsize Premium Car segment in the J.D. Power and Associates APEAL study. One of the most innovative and technologically advanced luxury models at its price point, the A6 has progressive features like head-up display, a MMI touch pad that recognizes handwriting in multiple languages, a thermal infrared imaging camera with night vision assistance as well as the Audi pre-sense plus driver assistance system and Audi connect.

Several Audi models ranked third in their respective segments in the J.D. Power study including the 2012 A4/5, Q5, Q7, and TT.