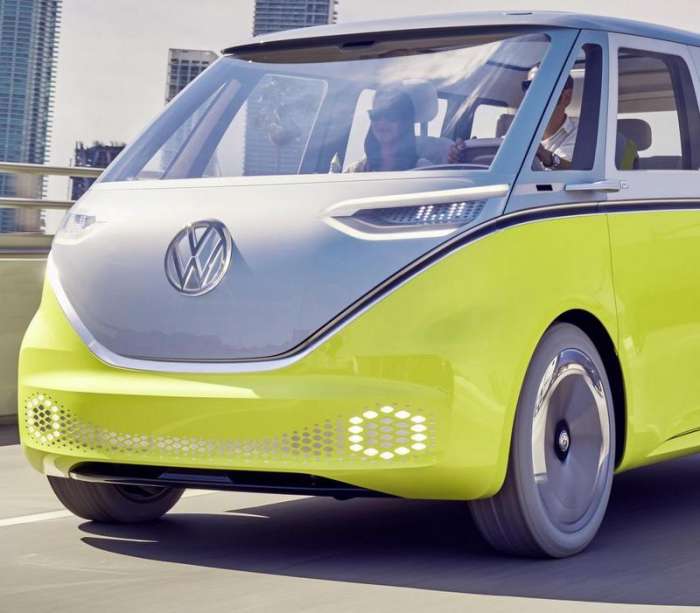 VW Brings Its New Buzz To the Geneva Auto Show

Volkswagen continues to show its I.D. family of electric cars as the path on which the automaker is moving to the future. Volkswagen has promised on the order of 30 new electric models by 2025 which means that each of its many subsidiaries will be offering electric vehicles based on the same platform, MEB.
Advertisement

By now, Volkswagen’s I.D. Buzz should be familiar to anyone who follows cars. The I.D. line is VW’s first standalone line of electric vehicles. The first vehicle, an electric hatch about the size of the Golf, debuted to good reviews in the early fall. Called the T1, it set the tone for the rest of the I.D. line.

Based on VW’s Modular Electric Drive Matrix (MEB), the T1 uses the same components and platform pieces that its sibling, the Buzz, also uses. Buzz was added to the VW lineup at Detroit’s North American International Auto Show in January. The T1 and Buzz are two parts of the I.D. family of electrics, the third; an SUV is slated to join the line by 2025.

And, as the Geneva Motor Show opens its doors, VW is reintroducing the I.D. Buzz to consumers.

An MPV (multipurpose vehicle, aka minivan), the Buzz shares more than a passing resemblance to its predecessor, the VW Bus, but the design is, of course, more modern. Like the older Bus (also called the Kombi or Transporter), the Buzz maximizes the available space. Like many small vans, the Buzz’s footprint is vaguely reminiscent of a midsized car. Since VW has only one midsize car, it is safe to say that the Buzz uses the Passat as its template, though the vehicle lineup is all-electric.

The Buzz MPV is a lot of package in a relatively modest space. Overall, the MPV is 195 inches long. That is a nice footprint. However, the more telling statistics are the height and width. At 77 inches high and 78 inches wide, the near-square Buzz offers lots of available interior space.

With lines that are very reminiscent of the VW Bus, the Buzz features swept lines that give the electric the impression of movement, though it is standing still.

The Buzz promises to be versatile. It features multi-variable seating, says the automaker. In other words, the Buzz has many configurations. And it features interactive connectivity, showing it is ready for the networked world of the future.