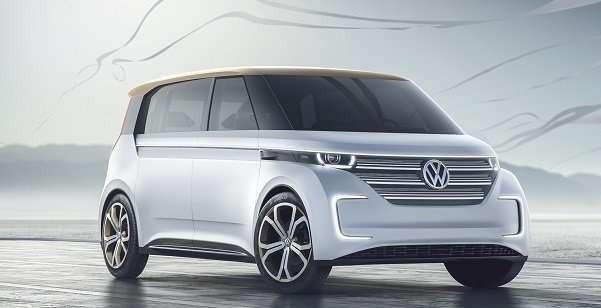 Volkswagen's strategy to be a leader in 'clean diesel" suffered a severe blow with Dieselgate, resulting a class-action suit and settlement in process, but the company has a new plan looking to the future with its award winning BUDD-e electric car concept.
Advertisement

Until the Dieselgate scandal broke last September, one of the keystones on which Volkswagen had based its future direction in the U.S. was “clean diesel.” The automaker planned to leverage its diesel technology to make the Bavarian automaker a contender for top seller in this market. That strategy has suffered a rather severe blow with the Dieselgate revelations and the subsequent drubbing the automaker has taken in the markets; the courts, and the press, where almost daily revelations have taken quite a toll.

Volkswagen’s sales are off on the order of 15 percent for the year, though, interestingly Audi sales are up, and its share value has dropped in the vicinity of 20 percent since the first Dieselgate revelations appeared. Indeed, its self-inflicted cheating scandal has led to course corrections and changes that the carmaker had likely never planned to make. Where it had planned to base a substantial amount of its vehicle fleet on diesel technology, VW has had to retrench and retool its marketing plans.

Left Without Market Plan
Left without an entirely coherent marketing plan by the cheating scandal, VW has done its best to recover from Dieselgate and move on, even as the scandal refuses to go away. (See: How Much a Buyback Payments Should Be in VW Dieselgate Scandal Settlement). Just this weekend, for example, stories appeared that discussed a find by U.S. investigators that VW’s Audi subsidiary used a sophisticated three-program software switch to meet emissions standards. The software gave the appearance or normal engine operation, including the appearance that it met emissions standards. It achieved this by allowing the engine to meet emissions tests for 20 minutes, resetting at 22 minutes to “normal” mode. Normal mode meant higher emissions of nitrogen oxide as the tradeoff for performance and mileage.

To the world, it looked as if the engine met all the federal standards. Only the engineers knew that it didn’t.

Meantime, Dieselgate is the scandal that just doesn’t cooperate with Volkswagen’s likely fervent wish that it would go away. Just this week Italian authorities fined the automaker $7.6 million for its business practices. South Korean has also just halted diesel sales there, too, in another development. And, there are still criminal investigations ongoing in the U.S. and Europe.

Because of these developments, Volkswagen has spent months retooling its product strategy for the U.S. market. Formerly, the automaker has bet its future on diesel technology as a method to meet performance and environmental needs. There was an electric component to its planning, but it was subsidiary to the aspirated engine side of the ledger. That has been turned around now as the automaker has been showing its hand of late, most recently at last week’s Management Briefing Seminar in Traverse City, Mich.

At one session, the Volkswagen outlined plans for three new SUVs or crossovers while, at the same time, showing that its plans also called for at least three new electrics. And, while those plans were greeted warmly by many, they were still just that, plans. The only concrete piece that Volkswagen has been showing is its award-winning BUDD-e microbus concept vehicle.

A Volkswagen Star Is Born?
Indeed, BUDD-e was one of the stars of the week-long meeting’s “Car of Tomorrow” session. At the meeting, Dr. Matthias Erb, chief engineering officer, North American Region, Volkswagen, introduced the award-winning concept vehicle, the first built under VW’s Modular Electric Toolkit (MEB) platform. VW is relying on that platform to help it find its way to future profitability by using a common set of tools to develop its electric vehicle capability.

The toolkit looks like it has done a very creditable job developing a vehicle that VW calls a mobile interface between vehicle and the world around it. BUDD-e was first unveiled at last winter’s Consumer Electronics Show in Las Vegas.

For Volkswagen, MEB represents an exciting promise. It is a way to shake its reliance on older technologies such as diesel and obtain as much as possible from electric technology and networking.

Dr. Erb told the session that BUDD-e “offers a glimpse of next-generation e-mobility, connectivity and infotainment innovations.” It is a vehicle that showcases “real-world possibilities of the future.” Dr. Erb noted that the innovative microbus, which won “Concept Car of the Year Awards” at the conference, as well. Is completely networked. It is “more thoroughly connected with its surroundings than any car before it.”

BUDD-e Likely More Than A Concept
All the hype aside, the BUDD-e will, like as not, appear in the next couple of years in one form or another. It has to as Volkswagen has little another choice, particularly since the 54.5 mpg ultimate CAFÉ average has remained in place. To meet the standard, electrics will have to be a significant part of the market mix. To be acceptable to the public, they have to provide things like range, capability and comfort. VW says BUDD-e does.

Its 101 kWh battery, one of the largest on the market at the moment, promises driving range of up to 233 miles before it needs a charge. That range is quite acceptable to most drivers as the average daily commute is still less than 75 miles.

Given VW’s absolute need for a reliable, fuel-efficient fleet in the future that is not diesel-based, you can bet that BUDD-e will go from concept to showroom within the next 18 months or sooner. And, given its need to excite customers about something besides diesel, it could be sooner.