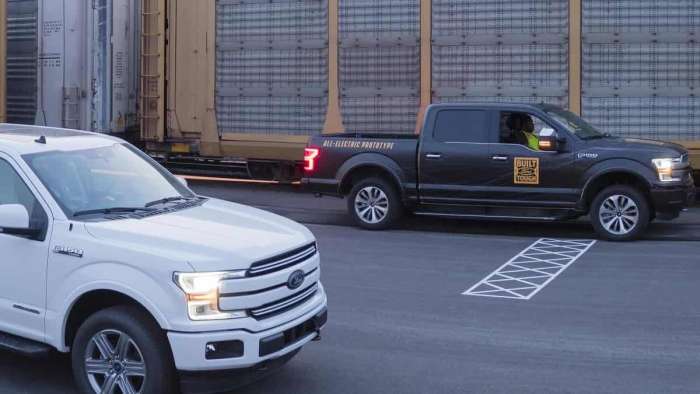 In a rather unusual circumstance, the wage and benefit package now circulating among Ford hourly employees also contains interesting news of the Ford F150 EV/Hybrid.
Advertisement

Here’s an interesting thought: sometimes, trends or actions are tightly bound together, even though they seem unrelated. Take the rapidly building knowledge base on the Ford F150 EV/Hybrid, for example. This information base has been expanding in recent days but not in the conventional ways. Those ways include news releases, interviews, chats with knowledgeable sources who know about the upcoming electric Ford F150/Hybrid. The information was handed out, almost on a platter, by Ford and the United Auto Workers (UAW). The information was in the pending UAW contract now undergoing ratification by Ford’s hourly workers. The contract spoke volumes about the Ford F150 Electric Truck and Hybrid and where they will originate.

For starters, though we know that Ford has hybrid and electric versions of the F150 pickup coming very soon, we now know when and where they will be coming from. We also know more about the technology used in them and where Ford will source its electric motors. We know that the Ford F150 Hybrid will be debuting soon as a 2020 model. The Ford F150 EV is slated to appear as a 2021 model.

Interest has been building in the Ford F150 EV lineup following last summer's railcar-pull stunt where a prototype Ford F150 EV pulled 10 railcar carriers, loaded with F150s, a-thousand feet. The kicker was that one electric pickup yanked and then pulled more than 1.25 million pounds of pickup that distance. The railcar stunt sparked interest in the Ford F150 EV/Hybrid and electric models in general. The railcar-hauling stunt was a great piece of promotion.

The new battery pack line and changes needed to make the Ford F150 EV/Hybrid are pieces of a $700 million investment in the truck plant. The truck plant investment plus investment in the Kentucky Truck Plant and the Michigan Assembly plant are parts of a serious infusion of cash needed to make the upcoming next-gen Ford F150 pickup line. The investments will be made over the next year and include: $1.1 billion for updates to the Michigan Assembly Plant and $1 billion to streamline the Kentucky Truck Plant.

The Hybrid will likely use a single-motor system and an integrated 10-speed automatic engine. The Ford Explorer Hybrid uses a similar arrangement. One thought about the Explorer Hybrid is that any mileage improvements are only modest. The Ford F150 Hybrid will offer a type of takeoff that is opposite the Explorer. In other words, the Ford F150 Hybrid will feature a power takeoff that is useful for overnighting in the rough or at a worksite.

DeanMcManis wrote on November 13, 2019 - 12:55pm Permalink
It is good to hear that Ford is definitely going to build a hybrid F150 and EV F150, but like GM, their move towards electrification seems slow, especially for their top selling F150 pickups. Still, it's true that comparatively speaking Ford is ahead of other pickup automakers considering that GM has not even hinted at plans to build an EV pickup, and Dodge only offers a few mild-hybrid options, which have little EV benefit. From the 2020 Explorer Hybrid reviews it seems like it doesn't show a great benefit in either performance or economy. Getting 22-23MPG, which is similar to my friend's 2018 Highlander (non-hybrid) with it's peppy V6. Hopefully the F150 will have a hybrid battery bigger than the 2020 Explorer Hybrid's tiny 1.5kWh battery, which seems more like a mild hybrid effort. It would be great if the F150 will use the plug-in hybrid drivetrain from the new Lincoln Aviator Hybrid with it's 13.5kWh battery and TTV6 which makes nearly 500HP!. That kind of huge power and around 30 miles EV only driving would totally disrupt the pickup truck market. But Ford could decide to play it safe and NOT have the hybrid F150 compete against either their own Aviator or their future F150 EV, using the weaker Explorer Hybrid drivetrain instead. Hopefully Ford takes the EV lead with their upcoming electrified F150 models. It is good to have some real info about the electrified F150s, rather than only whispered rumors.