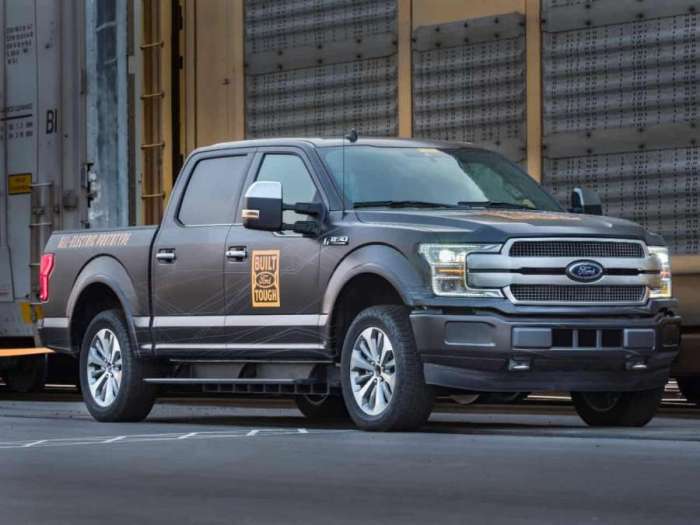 In what should come as a relief to Ford and General Motors, the public favors their products, according to a recent Autolist.com study. The study looked closely at Tesla and Rivian and found that while new truck buyers tended to favor them, current and previous truck owners liked Ford and GM products.
Advertisement

If U.S. truck manufacturers are concerned with the latest electric truck marketing efforts of Tesla, which has been touting its Cybertruck for months, and Rivian, a recent study should settle angle jangled nerves. The study found that Tesla’s Cybertruck and Rivian’s R1T may not be the marketing threat that they had appeared to be.

The study found that despite all of the fanfare generated by Tesla’s Cybertruck and Rivian with its updated version of the decades-old three-box truck if traditional truck buyers had to buy electrics now, they would prefer the standard automakers and their wares.

The study, conducted recently by Autolist.com, found clearly that customers still prefer Ford and GM when it comes to electric trucks. The survey by Autolist’s Analytics Team looked closely at the rapidly emerging electric truck market, and they found that despite all of the publicity generated by Elon Musk’s Cybertruck and Rivian’s R1T traditional truck buyers still want their Fords and Chevys.

When the Autolist team matched Ford and GM against the Rivian’s R1T and the Tesla Cybertruck, customers favored Ford’s F150 E-Truck and GM’s planned E-Truck over the Rivian R1T and the Cybertruck. The Rivian came in third in the survey, and Tesla was fourth.

In the survey, the researchers found that people who have owned trucks in the past or now favored Ford and GM. Meanwhile, the Cybertruck and the Rivian were popular among those who were never truck owners.

The study also found that the Rivian and Tesla pickups could easily coexist in the marketplace without taking sales from one another. It should keep their marketing types happy.

Across all respondents, GM’s truck was the top choice, grabbing 29 percent of the vote. Ford’s E-Truck followed closely with 27 percent, followed by the Rivian R1T at 24 percent, and Tesla’s Cybertruck, with 20 percent.

Chase Disher, an analyst at Autolist.com, called the “results good for all four brands. It shows that Ford and GM can leverage their considerable – and existing – truck followings to boost interest in their EV models. Meanwhile, it shows that Tesla and Rivian could be poised to grab a meaningful share of a crucial new growth segment.” There’s an interesting “gotcha” that Torque News will examine in a moment.

While details of the GM electric offering remain sketchy at best, it is likely that the E-trucks in this story will be on in 2021. GM has not yet said which nameplate will have an EV pickup. There are also rumors that GM may bring back the Hummer brand as an all-electric nameplate. Torque News’ Jimmy Dinsmore has an interesting take on the GM-Ford rivalry and the benefits the rivalry means for the market.

According to the survey, the audience for various trucks is markedly different. For example, if the respondent had never owned a pickup before, then they were likely to choose the Cybertruck. If, on the other hand, they had once or currently owned a truck, then their choice would be one of the major manufacturers.

And, in what may be a major issue for Tesla, only 14 percent of those who had owned trucks before said they would consider the Cybertruck. It could be a “gotcha” that Tesla may not be counting on. Though its electric cars are market-leaders, its controversial, unconventional E-truck is steaming into waters it has never had to access. For example, when the Tesla line appeared, it came into rather calm waters as it was an untapped market in which the automaker could mainly deal on any terms it wanted.

Some Assumptions May Have To Be Changed

However, trucks are another matter. Though it may look like a huge untapped market for Tesla, the marketing types there had better remember that trucks have been on sale for more than a century. No matter how much “gee-whiz” thinking Tesla invests in the Cybertruck, it will not be a market-leader. To gain a sizable market share, Tesla has to overcome Ford and General Motors, both marketing giants in the truck world, each with annual markets in the millions. Tesla’s estimated 220,000 trucks per year is a blip on the Ford and General Motors marketing radar screen.

Granted, Tesla can try to maintain that they are the “electric truck leaders” because they are there now. However, what do they have to market right now? At the moment, the automaker is showing several vehicles working the streets around Los Angeles in their videos. However, that doesn’t translate into a sales-ready fleet, though Tesla is taking pre-orders for their Cybertruck. Reportedly, the automaker has right around 250,000 pre-orders, but, unlike its Model 3 a couple of years ago that asked for a $1,000 placeholder, the placeholding payment for the Cybertruck is only $100, not an excessive amount. Though it is small, the downstroke levels can skew new marketing claims. So, while Tesla might be able to claim market leadership, based on pre-orders, it is the only figure the electric carmaker can use. As far as is known, there is no other figure available. Meantime, it has to look over its shoulder at rival Rivian because Rivian can probably make similar claims as well. They both occupy minority spaces in the electric market, based on the sheer size of their rivals.

Tesla and Rivian will survive because they are niche vehicles as Ford and GM battle it out at the top of the market. And, in an ironic twist, Ford may have an extra advantage. Ford and Rivian are working together. The linkup with Rivian widens Ford’s electric marketing advantage. Indeed, Ford not only keeps its significant marketing advantage as the automaker transitions to electrics, but it gains a niche among new buyers thanks to Rivian. The Rivian, by the way, is far more conventional. Its rounded lines and vertical lighting, while they may be a tad unconventional, are rather pleasing. And, the Rivian bed is what traditional truck buyers expect. It should do well on the market. Tesla, on the other hand, may do well at the start, but many early buyers may tire quickly of the blocky, angular truck. Also, they may tire of the Cybertruck when they learn that it is likely to be classified as a heavy-duty pickup. Also, they may tire of the small issues such as an undersized backlight that makes it hard to view the rear directly. And, the long sloping sail panels also make it difficult to see to the back. Then there’s the headroom-compromised rear seat which feels the impact of the steep slope of the roof. These are just some examples.

With all of that said, let’s look closely at the study to see what the Autolist team found.

Here are the major findings of the study. The first results list people who had never owned trucks before and their preferences:

The second group of major findings lists the preferences of those who had owned trucks before:

Some Takeaways From The Study

Here are some other takeaways from the study:

DeanMcManis wrote on December 20, 2019 - 2:21am Permalink
Is it really surprising to anyone that traditional pickup truck owners would choose their favorite brand of pickup over newcomers if all other features were equal? I found it particularly funny that many of these potential EV pickup buyers would choose the GM model EV pickup, when there is NO GM model pickup, no announcement, and only vague rumors of such a vehicle. As for Rivian and Tesla, they were always going to be minority players in the pickup world. Even by the time that Ford and GM do finally come out with rival EV pickups, many loyal Ford and Chevy truck owners will wait until their favorite brand comes out with EV models before making the leap to electric trucks. The very good news for me is that EV trucks are actually a certainty now, and coming within 2 years from now. Maybe sooner. Two points worth mentioning are first that EVs are still only making up around 3% of new vehicle sales in the U.S. and secondly 3% of truck sales amounts to around 90,000 vehicles. Now that is relatively small production compared to the 400K-700K of today's top pickup truck models. But considering that EV trucks are a brand new product, capturing that big a chunk of the existing gas and diesel car and truck market would constitute a HUGE success, and easily show that there is a real demand for EVs, even in the conservative truck world.
Marc Stern wrote on January 12, 2020 - 7:37pm Permalink
All excellent points.

Tsingshan's Threat to Tesla: EV Maker Is In Battery Crosshairs
Tesla-Funded Research Reveals One of The Biggest Mysteries of EV Battery
END_OF_DOCUMENT_TOKEN_TO_BE_REPLACED