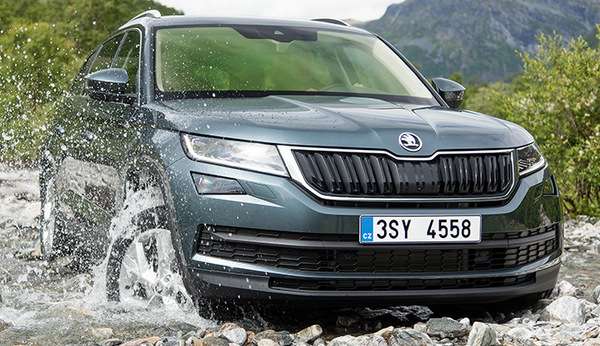 Skoda wants, probably more than anything else right now, to crack the U.S. market. They had planned to use the new Kodiaq, just introduced. It is a three-row, full-size SUV that should do well. The only fly in the ointment is a rather large one, Volkswagen, its parent. The automaker plans to introduce their own version of the same SUV in the U.S. Guess which vehicle will be sold here, at least, first, not the Skoda.
Advertisement

Okay, now, here’s a small test: Do you know what the Skoda company manufactures or has manufactured? Take a few minutes and think about it, please.

Time is up: What’s your answer? (Here’s are some hints)

A. Weapons
B. Motorcycles
C. Bicycles
D. Cars and Trucks
E. All of the above

So, which ones do you want to circle? Again, take your time, after all, one question – for all the marbles – is pretty formidable, isn’t it?

That’s just it. Skoda makes a lot of things well. For the U.S., the problem is that no one has ever heard of them, which is a shame because they have been around for more than 120 years since their founders pushed the first bicycles out the door in 1895. Today, Skoda is best known as a subsidiary of Volkswagen. It is a company that also wants to get into the U.S. market and has a model that can do it.

Skoda can make its way into the U.S. if they go with their strength, the Kodiaq. Okay, the spelling is weird, but, yes, it is named after a rather larger – and fearsome – North American ursine (yup, it’s a grizzly), so it would seem a natural for the U.S. market.

The only fly in the ointment is Volkswagen (isn’t it a shame when the owner wants a market all to itself, that some subsidiaries are frozen out. However, that's the way it is, at times. You can almost see the necessity of it, too. With Dieselgate pounding them, taking more cash than they had hoped it does make sense for VW to act this way). The automaker-owners of Skoda wants to sell a three-row, full-sized SUV here called the Teramont, starting in a couple of years. The Kodiaq is Skoda’s version of the same.

It’s quite a conundrum, says the thetruthaboutcars.com. On the one hand, Skoda has been hugely successful in its European market area. They want to continue that success. However, when the conglomerate of which you are a part wants to bring their model to the same market that you want to enter, it is good politics to step back.

Though it may be good politics to step back and let your corporate parent have the spotlight, Skoda’s reading of any tea leaves seems to be leading them on a path that says U.S. market. Why else would a top official for the Serbian firm call the Kodiaq a slam-dunk in the U.S. market where people, at least right now, are SUV-crazy.

The sales numbers back up Skoda. With car sales cooling down, across the board, crossover and full [-sized SUV sales are still sizzling hot. For some automakers, they are the difference between positive sales results and flat-lining.

So, while Skoda may step back for a year or so, don’t expect them to stay out of this end of the pool for very long, perhaps another year, at most. You see, all of the groundwork has been laid, and the trademarks have been approved. About the only thing that is left to do is get the Kodiaq prowling U.S. roads, even as the Teramont competes against. It.

Skip Redman wrote on September 4, 2016 - 12:17pm Permalink
Skoda should come to the states ASAP. The Volkswagen brand name value was neutral at best before the TDI issue chased away the tree huggers that hadn't yet moved on to Subaru. The smartest and fastest way for VW to gain share in this country is with a different brand, dealer network and pricing policy. Think Hyundai and Kia.. All the back-end systems are already in place, parts distribution, training centers, computer systems, call centers,etc. The existing VW dealers won't like it at all, but this is the right direction to take to ensure the company achieves their fair share of the US market.
Marc Stern wrote on September 5, 2016 - 5:59am Permalink
You made some interesting points that are all valid.
Allan Honeyman wrote on September 5, 2016 - 12:21pm Permalink
So, help the VW dealers out by letting them sell the Skoda brand a la Fiat/Chrysler.
Skip Redman wrote on September 5, 2016 - 2:29pm Permalink
The Fiat/CJ debacle is an example of exactly why it would not make sense to combine the brands. Have you seen Fiat sales lately? The CJ dealers have all but walked away from the brand and most would have turned in the franchise were it not for the fact that they built exclusive showrooms and, like with VW, get a steady promise of "just wait, new products are coming"... Having a completely separate brand means a new dealer body, new facilities a new brand identity and unique selling features which compel shoppers. It would be silly to attempt to do that within a VW dealership as the products under the skin are nearly identical. So one will generally win out over price/value, warranty terms, attractive financing etc - with the end result being one brand feeds off the other.
Marc Stern wrote on September 5, 2016 - 5:30pm Permalink
Your points are well-taken. Guess we'll just have to wait and see how it all works out!
Marc Stern wrote on September 5, 2016 - 4:25pm Permalink
Could work -- but more likely be confusing to customers. Maybe a separate showroom or, at least, very good signage...VW dealers can use the assist, after all, they didn't dream up Dieselgate!!
Marc Stern wrote on September 5, 2016 - 4:31pm Permalink
Skip, isn't this like an apples-oranges comparison? On the one hand you have the CJ/Fiat debacle and on the other you have VW/Skoda. One is an American brand that you are trying to sell with an Italian reboot, while the VW/Skoda linkup is two vehicles from the same organization, just different names. If you were to require a separate dealer network, you would have to have each dealer invest, at a minimum about $2 million for a new, free-standing facility, supposing there's room to build one at a dealer site, you are asking quite a bit, especially since VW dealers have been asked to invest about $1.2 billion over the last half-dozen years to support supposed "clean diesel" and other vehicles. Skoda/VW could work if the run up were done correctly and the linkage made early and often that VW is VW is VW and Skoda is too.
Skip Redman wrote on September 5, 2016 - 5:33pm Permalink
This is probably like arguing for the best form of government... and the topic is likely moot anyway as I doubt Skoda will attempt to come this way. That said, there are plenty of apple/apple examples of manufacturers adding lines to existing franchise brands and failing. Toyota/Scion is a good one - Scion is now dead because it was believed that the brand couldn't stand on its own - so the Toyota dealers killed it. The same thing VW dealers would do to Skoda if given the opportunity. "See - we told you it was a bad idea"... As VW attempts to "reinvent" itself in this market there is room for a European Hyundai/Kia brand. Combining Skoda (with a better name in the US) with VW's Nutzfahrzeuge commercial products could be a sustainable brand provided, as mentioned earlier, the consumer had a good reason to consider the brand to begin with. The beauty of introducing a new franchise is that the mfgr gets to implement all sorts of policy that is nearly impossible to do within an existing brand - such as one price selling, controls on advertising messaging, better warranty, goodwill and maintenance plans, and so on - perhaps even going with a no-dealer Tesla-like distribution model. While I feel very badly for VW dealers and their employees around the globe and particularly in the States, the answer is not to throw another badge at them. I think most of them would agree with me.
Marc Stern wrote on September 5, 2016 - 9:34pm Permalink
I honestly can't disagree with you at all.