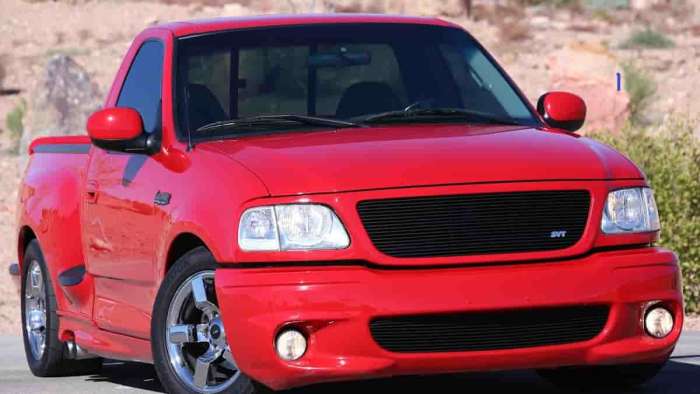 For years, it has been the Holy Grail of the Ford world to find an SVT Lightning with low miles and in great shape. Well, it looks as if this particular hunt is over as a Columbia, Missouri, classic car house is selling a 2000 Ford F-150 SVT Lightning with only 537 original miles on the clock. The price, well, let's let the story tell you.
Advertisement

A long time ago, in an automotive gallery not so far away, the car industry introduced a series of trucks that could perform. For example, the Ford F-150 SVT Lightning comes to mind. The F-150 SVT Lightning was produced by the Ford Special Vehicle Team (SVT), whose mandate was to build performers like the Lightning. The first generation Lightning, made from 1993 to 1995, with a three-year hiatus, was extensively revised and marketed again from 1999 to 2004.

For many, owning or having a Ford F-150, SVT Lightning has been like the search for the Holy Grail. Indeed, finding one is quite a task because of their limited numbers. And, if you were to find one – first- or second-generation -- the chances are it would have a lot of mileage. The last pure Ford F-150 SVT Lightning rolled off the assembly line 16 years ago.

What if you could find a low-miler? What would you give, then, for – drum roll, please – a 2000 Lightning (a second-generation original) with only 537 original miles on the clock. No, it’s no typo; the Silver Metallic SVT Lightning, one of only 1,300 made, is for sale right now at Fast Lane Classic Cars.. According to Fast Lane, the price is $52,995. True, it is a lot of money, but it isn’t much more than you might spend for a Ford F-150 Limited with options.

The 2000 Lightning is a gem. An original 5.4-liter supercharged V-8 powers the Lightning. The mill cranks out 360 horsepower and lays down 440 pounds-feet of torque. A four-speed automatic takes power to the rear wheels. It is a rear-wheel-drive-only pickup. The Flareside styling used on the second-gen Ford F-150 SVT Lightning has made it a unique vehicle, one sought-after by aficionados.

The one-owner supercharged pickup was purchased brand-new from Joe Machens Ford in Columbia, Missouri. It includes all the paperwork showing the Lightning as totally original. It also carries a clean CarFax, which attests to its condition. Then again, the owner only put 537 miles on in 20 years, which speaks volumes about the care taken with the performance pickup.

Indeed, the Lightning includes all its original equipment, including its plastic-wrapped trailer harness, though be sacrilege to put on this gorgeous truck.

As noted, this Lightning includes all its original equipment. There are two sets of keys and keyless entry fobs. The rest of the package is pure Lightning: a power split 60/40 leather/cloth bench seat, power door locks, power windows, AM/FM/6 CD/tape player-stereo combo, two-tone leather/cloth upholstery, and 18-inch aluminum wheels that sport Goodyear Eagle F1 tires. The safety equipment includes driver and passenger airbags. For its era, it was a complete package. It is available right now.

The Ford F-150 SVT Lightning was a 1993 model produced by the Ford Special Vehicle Team (SVT). The Lightning’s primary competition was the Chevrolet 454SS, a performance version of Chevy’s 1500 pickup, available from 1990 to 1994. The basis of the F-150 SVT Lightning was the standard F-150 truck. However, the SVT made extensive changes to the front and rear suspension. They also reworked the frame extensively. The first-gen Lightning used a 240-horsepower 5.8-liter V-8 as its powerplant. The Lightning’s power flowed to the rear wheels through a four-speed automatic pulled from the F-350 heavy-duty pickup. The first-gen SVT Lightning was slower than its competition, the 454SS and the GMC Syclone, but retained the towing and payload capability of the F-150. The first-gen Lightning was on the market from 1993-1995.

After a hiatus, the SVT Lightning reappeared in 1999. Again based on the Ford F-150, the SVT also implemented significant changes to the suspension. And it featured a FlareSide bed. The SVT team made not only extensive changes to the suspension to the frame as well. It also made extensive changes to the original engine so that the gen-two Lightning used supercharging to increase the output from the new-5.4-liter V-8 to 360 horsepower. The team employed a stock Eaton supercharger. In 2001, the engine’s output increased to 380 horsepower. Again, the SVT used a tranny from an F-350. The second-gen Lightning was on the market until 2004. It was the end of the pure SVT Lightning. In 2011, the Lightning named ended. It morphed into the SVT/Raptor, which ultimately changed into today’s Ford F-150 Raptor.

DeanMcManis wrote on January 1, 2020 - 2:22pm Permalink
I always liked the Lightning, both in styling and performance. And this model will round out some rich collector's Ford collection, probably sitting undriven for the rest of it's life. It's kinda sad to see such a cool truck un-driven, but maybe a museum will buy it, and many people can see what a cool truck this was, and how it led to the performance trucks today. Of course my mind immediately went to Jimmy Dinsmore's recent article showing new Ford supercharged F150s with 725HP for under $40K, which is a spiritual successor to the F150 Lightning in everything but the name. And the Ford F150 Raptor starts under $53K, and has better performance and far superior off-roading capabilities to boot. Interestingly, the first Rivian pickups should be coming out later this year, and even the base $69K model should be quicker than the speedy 2000 Ford Lightning was. It doesn't make the Lightning any less cool, but it is interesting to see the progress that 20 years brings to performance pickups.