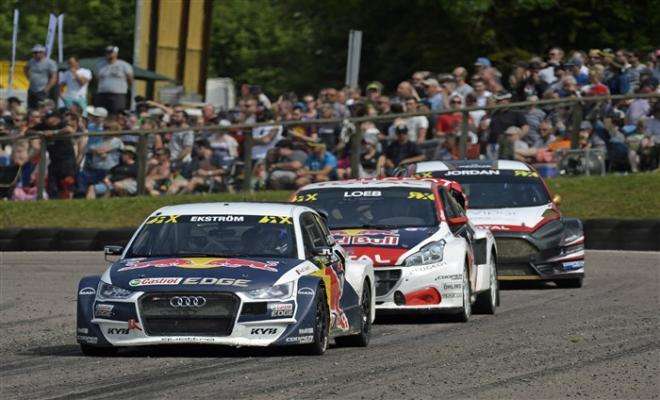 Mattias Ekstrom, leading the Audi-Team EKS WRC effort, dropped out of first place in the race for championship points with a fifth place finish at the site of the inaugural race 50 years ago in the U.K.
Advertisement

The return of World Rallycross racing to the track where it all started half-a-century ago saw Mattias Ekstrom, who had been points leader in the overall driving championship, lose the lead to a Volkswagen driver as Eks finished the weekend of racing fifth overall.

Ekstrom, fielding a World Rallycross team for Audi Motorsport, who had hoped for at least a podium finish, lost his championship points lead to VW driver John Kristoffersson. And, while Ekstrom did lose the individual points lead, Team EKS held onto third place points in the team category. The Swede was obviously disappointed by his finish at the birthplace of rallycross, Lydden Hill in the U.K.

From the start of the anniversary weekend, Ekstrom and his teammates, Toomas Heikkinen and Reinis Nitiss, experienced some obstacles. “I started well and held third place consistently in the qualifying sessions behind the strong Polos,” Ekstrom explained. “In the semi-final, things weren’t quite right, which is why I had to start the finale from the third row.”

Then, things went from bad to worse. In the semi, Eks started strongly and was battling Sebastian Loeb toe-to-toe when a blowout took him out of contention, dropping him to fifth. “We have, to be honest, winning here was never on the cards,” Ekstrom told reporters. However, a “podium finish was. But to achieve this everything would have had to run perfectly.” Things didn’t yield that result, dropping Ekstrom to fifth.

With that change in fortune, the former leader became the hunter. Eks had topped the standings for the better part of two season – 253 days – in South East England. His fifth place finish put him four points out of top championship contention. “I’m only four points behind Johan Kristoffersson. In rallycross, things can change very quickly. Scoring 30 points on the weekend is possible. We’ll be back and will attack from the word go at the next round in Norway,” Ekstrom enthused.

Team EKS has problems during the weekend

Things didn’t go well for Ekstrom’s teammates, Heikkinen or Nitiss. Though Heikkinen qualified for the semi – the fifth time this season – he missed the final after finishing sixth. “The semi-final is always the minimum goal. It’s disappointing that it wasn’t quite enough again this time, but the engine failure on Saturday had me playing catch-up immediately,“ the Finn said in an interview.

Nitiss ended up a spectator by placing 16th overall. Out of contention for the final, following the qualifiers and semi-final, the young driver said he was looking forward to the next stop. “ I have fond memories of Norway.”
In 2014, a then-18-year-old Nitiss became the youngest driver to win a World Championship round in the Supercar Class in Hell, Norway. The next stop on the World Rallycross tour will be June 10-11 in Norway.

LG's New EV Battery Plant Is a Welcome News for Tesla
Tesla Giga Berlin's New Hurdle: It's Not Only the Gov't, but Now Tesla Itself
END_OF_DOCUMENT_TOKEN_TO_BE_REPLACED