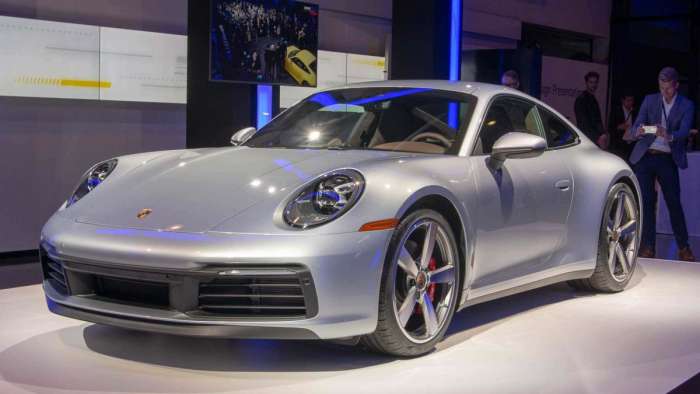 Although Porsche 911s are fantastic on dry pavement just let a little raininess get involved and bam, you have a vehicle that can be quite a handful. It is because of this that a feature developed in the mid-1990s "wet mode" has finally been included on this high-line sports coupe.
Advertisement

911 Is One Of Best-Handlers On The Road

Though the 911 is considered one of the best-handling dry road sports cars in motoring that can easily switch from daily driver to the track and back again, you probably didn’t know that the 911 likes to swim.

Some call it an inherent problem, while others may not think of it as one, unless, of course, this particular issue rears its head and bites.

Let’s look at a little history, shall we? During the 911’s development engineers engineered the performance coupe to handle on the dry roadway. It seems like they forgot that cars also have to drive on wet surfaces , as well. It appears that due to the vehicle’s lightweight and wide tires the 911 likes to hydroplane

Best Course Of Action Isn’t Often The Chosen One

The best course of action would be slowing down and moving a lane to the right. There’s only one problem with this. However, as Ulrich Morbitzer, head of sports car chassis development at Porsche, explains, the average Porsche driver isn’t accustomed to this. Porsche drivers choose to believe that control systems such as ESP can help to stabilize a vehicle.

So, as the new models make their debuts, comes the information that there will be updates to the braking system – electronic brake booster, continuously adjustable dampers – as well as the new wet weather safety system.

All new 911s will now come standard with a new safety system. Miniature microphone sensors analyze the intensity of the water indirectly on the road splashed up into the front wheel arches. Depending on the current speed, the vehicle can recommend the driver to activate the so-called "wet mode."

At first, if the system is activated, the 911 prepares itself for hydroplaning by reducing engine torque buildup. At the same time, torque distribution is biased to the smaller front wheels which should result in better stability. Also, aero flaps open so there’s more downforce. And, the Porsche Stability Management System and the Porsche Traction Management system will find their actuation backed off a bit.

New System Isn’t As New As It Sounds

The new system isn’t perhaps as fresh as you may think. The Porsche Advanced Development Department developed the wet mode concept in the mid-1990s. It was part of a European research program called “Prometheus.” Daimler-Benz started it off.

As Morbitzer explained, the wet mode was planned for a higher-performance vehicle like the 911 Turbo. However, August Achleitner, engineer-in-charge of the 911 line, changed his mind after a customer lost control of a 911 on a rain-slicked road. Frankly, Morbitzer was puzzled about the “why” of it all. “Why it was never implemented, I don’t know,” he said. It was also before his time, he added. He concluded with the realization that people “drive too fast in the rain and are not aware of how close they are to the aquaplaning threshold.” It’s also especially true of 911 customers. The implication was that wet mode was long overdue.