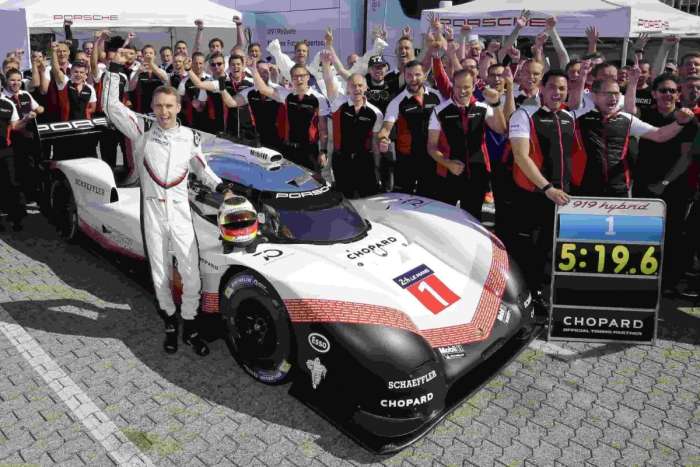 Porsche has knocked the old holder of the best lap record at the Nordschleife, the Nurburgring's "Green Hell." The driver, Timo Bernhard, slice nearly a minute off the old record. The new record should stand for a bit, though,Porsche may decide it wants a better record and may go again.
Advertisement

For nearly four decades, Porsche has held the lap record for Nurburgring’s Nordschleife race circuit. It was a record set by Stefan Bellof at the wheel of the powerful Rothmans Porsche 956 C. The new mark came during practice for the 1,000-kilometer WEC sports car race. Average speed was over 200 kmh.

For 35 years, no one contested Bellof’s feat. He was called the most significant racing talent of his time. He died tragically behind the wheel of the Porsche at Spa-Francorchamps in 1985.

Today’s record-holding driver, Bernhard, knows his way around the track, often called one of the toughest in racing. He is a five-time winner overall of the Nurburgring 24-Hours. He is also a two-time outright winner of the 24-Hours of LeMans. He is also the reigning World Endurance Champion, driving a 919 Hybrid. As he climbed out of the cockpit, he told an interviewer that “this is a great moment for the entire team and me – the 919 program’s icing on the cake.” Excited by the new record, he said that the “Evo was perfectly prepared.” And, “thanks to the aerodynamic downforce” he was able to “… stay on full throttle … at sections I never imagined.”

“I’m pretty familiar with the Norschleife. But, today I got to learn it in a new way,” the 37-year-old driver enthused. He is a huge fan of Bellof. In 2015, on the 30th anniversary of Bellof’s tragic accident, Bernhard raced at the Spa-Francochamps 6-hour. The race is part of the FIA’s World Endurance Championship. His helmet carried the famed black-red-gold design of the 1980s star. “For me, Stefan Bellof is and remains a giant,” he emphasized, “Today my respect for his achievement with the technology available back then increased even more.”

This Is The Second Race Track Record for Porsche

Friday’s success is the second track record for the Porsche 919 Hybrid Evo Tally. On April 9, 2018, in Spa, the dramatic evolution of the Le Mans winner tapped faster than a Formula One Car. Driven by VW works driver Neel Jani, himself a Le Mans winner and Endurance World Champ, the Evo set a lap of 1:41,770 on the 4.35-mile track. Spa, set in the Belgian Ardennes mountains, has played host to other lap winners recently. Jani erased the record set by Lewis Hamilton, a 2017 qualifier, by 0.784 seconds. The British Mercedes driver owned the pole for the event, the Belgian Grand Prix, with a time of 1:42.553 minutes.

The Evo version of the Porsche 919 Hybrid, based on the car that took outright victory at the Le Mans 24-Hours, and made the FIA World Endurance Championship in 2015, 2016 and 2017. Over the winter, engineering looked at and changed the car. For example, its hybrid powertrain now develops a system output of 1,160 hp. The Evo’s modified aerodynamics generate over 50 percent more downforce compared to the WEC model. Top speed at the Nürburgring was 369.4 km/h (229.5 mph)..

LMP Team Principal Andreas Seidl commented: “As a race team we constantly search for challenges that push a car, driver, and team to operate on the limit. Conquering the “Green Hell” definitely provided such a challenge … Congratulations to Timo for his sensational drive. Being a record winner at the Nürburgring, Timo was the logical choice for the job. Balancing attack and caution at all times was mandatory on this circuit. Safety is the highest priority. In this regard, I also like to thank the Nürburgring team. Porsche cultivates a long and deep relationship with the ‘Ring. Record attempts wouldn’t be possible without the highly professional track support.“

Fritz Enzinger, Vice President LMP1, added: “A big thank you goes to our development team in Weissach and the crew on site for the focused and safe operation of this record attempt. It is terrific what our team has achieved in four years in the World Endurance Championship: From 2015 to 2017 three overall wins in Le Mans and three drivers’ and three manufacturers’ world championship titles. This isn’t easy to be reproduced by anyone. The Tribute Tour is our homage on these years. We didn’t want to see the most innovative race car of its time disappearing unceremoniously into the museum. Thanks to the support from our partners, we were able to develop the Evo version of the Porsche 919 Hybrid for record attempts.”

LG's New EV Battery Plant Is a Welcome News for Tesla
Tesla Giga Berlin's New Hurdle: It's Not Only the Gov't, but Now Tesla Itself
END_OF_DOCUMENT_TOKEN_TO_BE_REPLACED