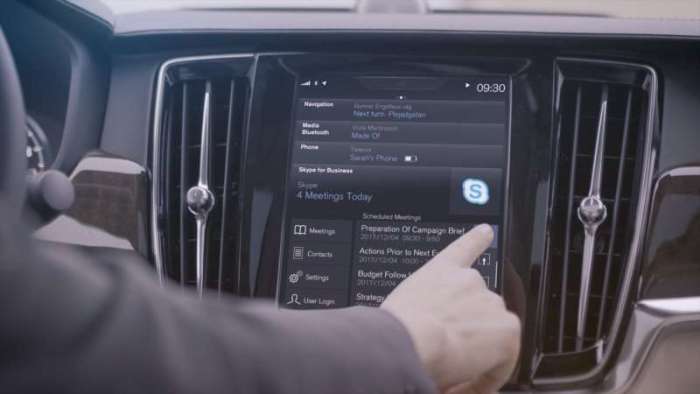 Life In The Distraction Lane: Volvo To Implement Skype In 90-Series

Volvo plans to integrate Skype for Business in its 90-Series models so, the automaker believes, drivers can participate in business conference calling. The problem is that with all of the distractions drivers no face, isn't this just one more?
Advertisement

As if life isn’t distracting enough and as if there aren’t enough features in today’s cars that are also distractors, Volvo has just announced that it is adding, perhaps, one of today’s biggest distractors around, Skype, to its 90-Series vehicles.

The automaker is adding Skype for Business. It is used primarily for conference calls. The communications app is part of the display on Sensus touchscreens and will appear in Volvo S90 sedans, V90 wagons and XC90 crossovers.

Interesting To The Point Of Distracting

Here's where the whole plan gets more interesting – or distracting, depending on your point of view. According to Volvo, the touchscreen display will show your schedule of upcoming meetings and allow you to connect with a tap, no mind-numbing codes needed.

Volve seems to think that the simplified access will keep you safe because you have more opportunity to keep your hands on the wheel and eyes on the road. And, we hate to be killjoys, but, won’t driver’s be taking their eyes off the road to read the schedules and then find the right button to tap? So, how is this feature not just another distraction of the type the National Highway Traffic Safety Administration has been warning of for months? Honestly, Volvo’s system is the classic definition of distracted driving.

Of particular interest in this piece is the fact that Volvo and Microsoft have worked together in the past. And, now that Microsoft owns Skype, there is speculation that Microsoft’s Cortana voice assistant may be used to do what they see as improving the driving experience.

It is entirely possible that some of Cortana’s contextual insights might be integrated so that you may be told your destination and given a route to get there without asking? Or, it could involve nagging updates to your course with each outburst being a better path. This could be more than a little distracting.

Is It Just A Marketing Gimmick?

To say that this might not be distracting ignoring the fact that it is a distraction in the first place. So other than as a marketing gimmick, why would an automaker include Skype capability in the infotainment system? Other than having the bragging rights, there’s not much need for it. And, think of this, all it would take is an interfaced dashcam and better keyboard capability to give you full videoconferencing ability. Think of just how distracting this is.

So here’s a suggestion to Microsoft and Volvo – deep six the Skype/Cortana integration. It is an interesting technical exercise. However, given the very real potential for major distraction, it might be better to leave this one on the drawing board.

Parks McCants wrote on December 30, 2016 - 1:36pm Permalink
Good day Marc. I have much seat time in the S90 sedan, V90 wagon and XC90 SUV. If you check out the exceptional segmented "sweep action" T.V. sized touchscreen monitor, you'll find a Television, video option in Europe. However, it only activates when in the parked position. As to Skype, same deal. You won't be Skyping while rolling down the road, yet! As you know, Volvo is on the path to 100% level 5 autonomous driving. Get it? While you're reading the news, you will be allowed to talk to mom or whoever over Skype..
Marc Stern wrote on December 30, 2016 - 4:41pm Permalink
I get it, but, here's the thing, the way the info reads on this idea, it seems like another "good use of dash time." We keep on being told by various manufacturers and others that there is something valuable about using all the wasted time behind the wheel for other, more important things, like arguing with others at meetings (conference calling) or discussing complicated ideas and the like. One other thing, as I looked at some of the images surrounding this information, there was at least one showing a driver yakking away without a car in the world with the background moving by. Interesting take, isn't it?
Parks McCants wrote on December 30, 2016 - 5:53pm Permalink
Certainly. It's been proven through testing that "hands-free" cellphone use is just as distracting as hands-on communication. According to IIHS, the average time spent interfacing with a center stack static screen touch pad is 5 to 7 seconds -- when traveling at 60 MPH -- greater than the distance of a football field. In the end, attentive driving rests with the driver. It may be noted that Skype can be utilized as a cellphone substitute -- vocal communication only. Thanks for the informative read.
Marc Stern wrote on December 30, 2016 - 8:46pm Permalink
Glad you enjoyed!