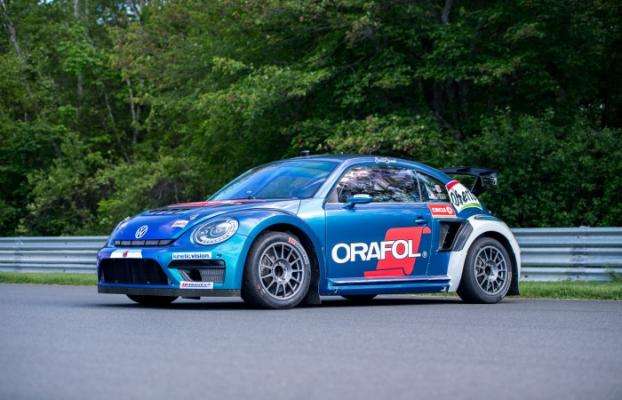 As the Volkswagen Andretti Rallycross team rolls into the New England appearance of the Red Bull Global Rallycross competition, drivers Scott Speed and Tanner Foust are hoping to return to their winning ways.

At their last outing in Louisville, the team was quick in the qualifiers and semis, but when the time came for the final on Sunday, rain turned the event into a free-for-all. Speed ended up with a third-place finish, followed by Foust in fourth. Both drivers earned points in the battle for the overall driver’s championship while they also built points for the manufacturer’s cup as well.

Rallycross road show stops at N.E. venue
This weekend, the next chapter in this year’s unfolding race drama will occur at that venerable race venue, Thompson Speedway Motorsports Park in Connecticut. The track has been in the racing business since the 1940s. At one time, it was one of the premier short-track venues in the Northeast. Saturday’s action features the first doubleheader of the season where there are a large number of championship points up for grabs.

Championship leader Scott Speed’s No. 41 GRC Beetle will be sporting new livery. His Beetle sports a unique color-changing wrap from ORAFOL, the vinyl graphic manufacturer. “Doubleheaders are always very important for the championship, as you can gain or lose a lot of points depending on how the weekend goes,” Speed told an interviewer. “It’s cool to have a special livery on a car to tackle this important stage of the season.”

Saturday’s doubleheader is the third new venue for the Red Bull Global Rallycross in three events this season. A .895-mile oval, the combines parts of Thompson’s historic oval and road courses. There will be a larger-than-normal dirt section on the back half of the track.

Foust, the pilot of the No. 34 Rockstar Energy Drive Beetle GRC is currently second in the points standings and is hoping the historical track will suit his driving style and give him his first victory of the year. “By setting pole in Louisville, we proved that we could be the quickest car in the field. I’m hoping to carry that sort of speed through the weekend, and this would be the place to do it with so many points on the line. I’m looking forward to getting on the track.”

For those who can’t get to Thompson to see the action, both rounds of the doubleheader will air live on NBC. Round 3 will air Saturday at 5 p.m. on NBC, while Round 5 will air at 5 p.m. June 4.

For Some Former Daimler Managers Daimler Is Authority, While Tesla Is Like a Startup
How Daimler Unintentionally Subsidizes Tesla Giga Berlin
END_OF_DOCUMENT_TOKEN_TO_BE_REPLACED