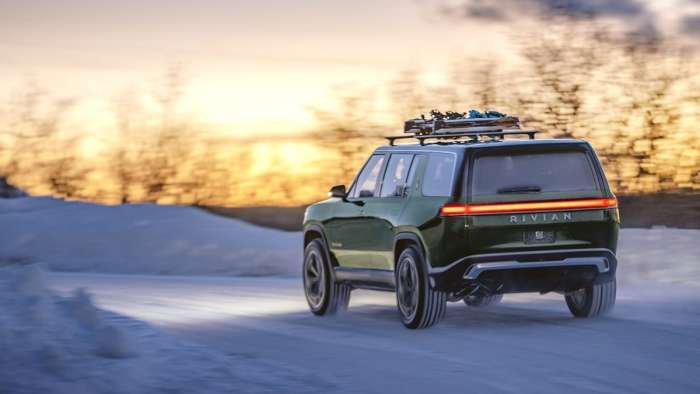 Ford and Rivian announced this week that they are working on a new electric luxury SUV for Lincoln. The new SUV is the result of commitments made by Ford and Rivian when Ford invested $500 million in the promising electric vehicle startup. It was a testament to Ford's viewing Rivian as the real deal.
Advertisement

At a time when it takes considerable investment in electric technology to get a brand-new electric vehicle off the ground, Rivian finds itself in an excellent position. Starting with a $500 million investment by Ford, as well as more than $1 billion from Amazon and a major-vehicle order, and another $1.3 billion from a group of investors led by T. Rowe Price, the electric vehicle maker now finds itself with nearly $3 billion in the bank. More critical for its success, Rivian has commitments for 100,000 delivery trucks for Amazon, as well as commitments from Ford and its luxury Lincoln Division for the development of an all-new fully electric vehicle, based on Rivian’s skateboard platform.

The commitments from Ford were part of the automaker’s original investment of $500 million in the new electric vehicle maker. The pledges were also a signal from Ford that it considered Rivian a serious, though new, manufacturer. Indeed, Rivian’s early rounds of startup seed money enabled the automaker to show its intentions by building a proto fleet of several of its handsome electric R1T pickups and R1S SUVs. Rivian unveiled the electric truck at the 2018 Los Angeles Auto Show. My Torque News colleage John Gorham looks at Rivian funding and its future in an interesting story.

The new Lincoln EV will join the Aviator, and Corsair Grand Touring plug-in hybrid vehicles as the automaker solidifies its commitment to electrification.

The zero-emissions SUV will feature connected and intuitive technologies designed to create an effortless experience for Lincoln customers.

“Working with Rivian marks a pivotal point for Lincoln as we move toward a future that includes fully electric vehicles,” Joy Falotico, president of Lincoln, said. “The vehicle will take Quiet Flight to a new place – zero emissions, effortless performance, and connected and intuitive technology. It’s going to be stunning.”

Plans call for Lincoln to use Rivian’s skateboard platform as it develops the new SUV. It is part of Ford’s planned equity investment in Rivian. The new vehicle is also part of Ford’s already announced $11.5 billion investment in electrification. Electrification plans have already seen the announcement of the Mustang Mach-E, plus a fully electric version of the automaker’s best-selling Ford F-150 pickup.

Rivian Chief Exec R.J. Scaringe said at the announcement this week that the “vehicle development partnership with Ford is an exciting opportunity to pair our technology with Lincoln’s vision for innovation and refinement. We are proud to collaborate on Lincoln’s first fully electric vehicle.”

Linoln Has Had Three Busy Years

The last three years have been remarkably busy for Lincoln. During that time, the luxury automaker introduced four new SUVs that include the Nautilus, Corsair, the Aviator, and the Navigator. The new electric SUV is the fifth new SUV planned for Lincoln’s lineup of vehicles.

Indeed with the introduction of the new electric SUV, Lincoln is mostly out of the car business as it ceases production of the MKZ sedan. Ford built the MKZ its Hermosillo Assembly Plant in Mexico. With the ending of the MKZ, Ford plans to use the plant to make new SUVs. Lincoln’s remaining four-door sedan is the luxury Continental.

Over the last three years, Lincoln has seen its global SUV business grow to seven percent year-over-year. The new SUVs have also helped Lincoln to its best U.S. SUV sales in 16 years.

Jimmy Dinsmore wrote on January 31, 2020 - 1:17pm Permalink
Interesting. I wonder what this indicates about the Mach-E (#NotAMustang) and why Ford wouldn't share that platform with Lincoln and go it alone without Rivian. Do they not believe in the Mach-E (likely) or is Rivian doing something different that they like?
Marc Stern wrote on January 31, 2020 - 4:43pm Permalink
You said it yourself in your piece on the Mach-E. The interest seems to be lacking on the Mach-E and there was a commitment to work together that resulted as part of the $500 million seed money. I haven't looked closely yet at the tech requirements of the Mach-E platform, but I am willing bet that the Rivian platform may be easier to work with an integrate into the Quiet Days architecture Lincoln is using on its luxury SUVs.
John Goreham wrote on January 31, 2020 - 6:24pm Permalink
Jimmy has an excellent point. Marc makes a good point too about the Quiet Days differentiator. I feel strongly that off-shoot brands like Caddy and Lincoln have done themselves a disservice by re-badging the mainstream vehicles for their premium brands to sell. Maybe this will help make Lincoln more different in a good way. I'm excited by Rivian and Ford both.
DeanMcManis wrote on February 3, 2020 - 8:39am Permalink
I think this move is about practicality and marketing. Ford said that the Mach-E production would be limited due to supplier constraints, and Rivian brings additional technology and it totally justifies the Rivian purchase, showing that Ford will use Rivian as an Asset, and Rivian will benefit having Ford as a customer. I do wonder about profitability and timeline though. Rivian is pricing their own models starting at $69K-$72K and up, but Ford has to Lincolnize it inside and out, and then still make a profit. The Navigator is already pushing $100K loaded, and this BEV model will require all new bits throughout. Still, I think that it's good news for Rivian, and for Lincoln. I just hope that they get the new model out quickly, as the competition is getting stronger in the Luxury/performance SUV segment year to year.
Jimmy Dinsmore wrote on February 3, 2020 - 9:06am Permalink
Yes, they need to be careful not to price themselves right out of the market!