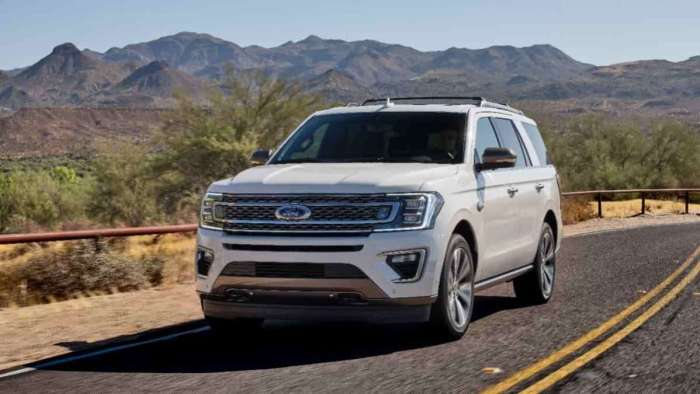 Ford has launched a pair of recalls to repair problems with Expedition and Navigator SUVs and with some F-Series Super Duty pickups powered by the 6.7-liter engines. In the first recall, the automaker has recalled about 3,000 SUVs to repair poorly welded second-row headrests. In the second, a number of Super Duty pickups, equipped with 10-speed transmissions have problems with poorly tempered key parts.
Advertisement

More than a few years ago, there was a song whose refrain ended up (to paraphrase here) "little things mean a lot." You might wonder what I mean by this. By this, I mean that the last few recalls from Ford have been small.

Not every Ford recall has been on the small side. The recent door latch issue, covered by my colleague Jimmy Dinsmore shows the other side of Ford's recalls. In his story, Jimmy discusses Ford's continuing door latch issue, as well as the issue with the master brake cylinder in some Ford pickups.

For example, a couple of weeks ago, Ford recalled a total of 24 2020 Mustangs to fix the forward-looking camera module. Late last week, Ford stepped up and said it would repair the nearly 3,000 poorly welded second-row headrest brackets in full-sized SUVs.

And, Ford acknowledged it would replace the transmissions in F-Series Super Duty trucks equipped with 6.7-liter engines because there are issues with proper parts tempering that affect some transmissions. Meanwhile, I looked at a Ford Transit Connect recall recall plus a small Mustang call back to fix the fix-front camera modules.

With that said, let's fill in the details. Ford has issued two types of recalls. The manufacturer called the first recall a "safety compliance recall." The recall deals with issues that render certain parts out of compliance that the automaker must fix. The second is a standard recall.

In the "safety compliance recall," Ford has recalled nearly 3,000 Expeditions and Lincoln Navigator SUVs to repair poorly welded headrest attachment brackets. Specifically, the manufacturer has called back 2,898 Ford Expeditions and Lincoln Navigators SUVs. In the affected vehicles, there was a problem with the welds of the second-row driver's side headrest attachment brackets.

To date, Ford is not aware of any reports of accidents or injuries relating to this condition. The affected SUVs were built at the Kentucky Truck Plant as follows:

Dealers will inspect the seat structure and replace it, if necessary. The Ford reference number is 20C12.

The issue involves the transmission torque-converter damper plate. According to the manufacturer, the damper plate was not properly tempered, resulting in a brittle damper plate that may fracture.

If the plate were to fracture, the engine could stall, requiring increased brake pedal effort when stopping. The engine can restart, and the Super Duty can roll again if the driver shifts to neutral or park.

However, there might be an unexpected, aggressive re-engagement when shifting to Drive or Reverse. There is also the possibility of another engine stall. The Super Duty pickup will continue to operate in this manner until the service fix is completed.

This condition can increase the risk of a crash; however, Ford is not aware of any reports of accidents or injuries related to this condition. The condition affects 13 vehicles in the U.S. and two in Canada.