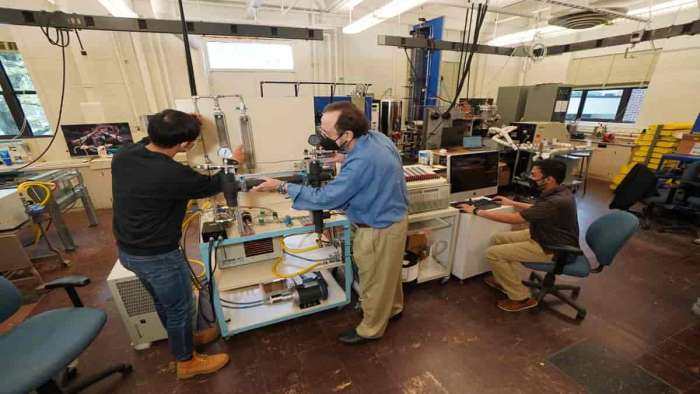 Thanks to the work that Ford Motor Co. and Purdue University researchers are doing right now it is quite possible that within a couple of years, owners of electric vehicles like the Mustang Mach-E, E-Transit van, or the F-150 Lightning pickup will be able to quick- charge their vehicles without the need for huge cables.
Advertisement

With Ford having developed a new generation of electric vehicles, led by the Mustang Mach-E, followed by next year’s release of the F-150 Lightning pickup, and the upcoming E-Transit van, the automaker is now working with Purdue University to make charging them up quickly as conveniently as filling up with liquid fuels.

The Problem With Quick-Charging Is Heat

The problem with quick-charging vehicles is heat. The quicker you want to force a charge into depleted batteries the more heat is created. In order to handle the heat, the current solution, other than huge radiators or radiator-style coolers, is heftier charging cables.

As the need for quicker charges goes up, charging cables become thicker and thicker. In many cases, the charging cables will become so hefty that they are not convenient to use. And, if the cables are fitted with the proper connectors, you run the risk of destroying the cable if it is dropped the wrong way. Also, over time the step-down between cables widths can cause wear that is invisible and that also causes breakage.

The solution, as envisioned by a Ford Motor Co. and Purdue University development team is a new style of recharging cable. The researchers have taken an important early step in making the recharging EVs simple and time-saving.

Meanwhile, Ford is working with two major trucking firms to develop vehicles like the E Transit van which I discuss here.

Through a research alliance, researchers from both groups are working to develop a new, patent-pending charging station cable that could combine with in-development vehicle charging technology, making it even easier for people to transition to EVs with seamless re-charging.

There's more than just recharging research going on at Ford. In addition to the Ford-Purdue cable project, the automaker is working on giving prospective F-150 Lightning owners a reality experience that will help educate them on their future pickups.

“Today, chargers are limited in how quickly they can charge an EV’s battery due to the danger of overheating. Charging faster requires more current to travel through the charging cable,” said Michael Degner, senior technical leader, Ford Research and Advanced Engineering. “The higher the current, the greater the amount of heat that has to be removed to keep the cable operational.”

Purdue researchers are focusing on an alternative cooling method by designing a charging cable that can deliver an increased current. The cable uses liquid as an active cooling agent, which can help extract more heat from the cable by changing the phase from liquid to vapor – the key difference between this and current liquid-cooled technology on the market.

Cable May Be An EV Game-Changer

This innovation could one day deliver significantly more power than today’s leading systems to re-charge electric vehicles, making the potential of faster re-charging times possible if vehicle charging and other technology enhancements are made in parallel. Ultimately, this could eventually lead to re-charging EVs as quickly as conventional gas station fill-ups.

The idea for this technology originated based on the Ford team’s understanding of the challenges faced going to faster charge rates, as well as Purdue researchers’ area of expertise. The teams collaborate regularly to review the latest results and give feedback on areas of focus as the technology is developed.

“Electric vehicle charging time can vary widely, from 20 minutes at a station to hours on an at-home charging station, and that can be a source of anxiety for people who are considering buying an electric vehicle,” said Issam Mudawar, Betty Ruth and Milton B. Hollander Family professor of mechanical engineering, Purdue University.

“My lab has come up with a solution for situations where the amounts of heat that are produced are beyond the capabilities of today’s technologies.”

Mudawar says his lab intends to begin testing a prototype charging cable in the next two years to determine more specific charge speeds for certain models of electric vehicles.

“Ford is committed to making the transition to electrification easy,” said Degner. “We are glad to work closely with Purdue’s research team, which has the potential to make electric vehicle and commercial fleet ownership even more appealing and accessible.”

The alliance with Ford and Purdue is part of hundreds of strategic alliances the company has with university professors around the world. Providing graduate students with opportunities to work on real world-challenges helps them develop their skills while introducing Ford to students who may choose to start their career at the company.

“The research that we are conducting in a project such as this is really advanced, and we view it as a benefit for us, the future of charging electric vehicles and as a pipeline to young talent – and we’ve seen success in doing this,” said Ted Miller, Ford’s manager of Electrification Subsystems and Power Supply Research. “Students get engaged, they like the work they’re doing, and it’s a sustained investment in their laboratories while helping us solve problems.”

While the fast-charging cable won’t be on the market for some time as research continues, Mudawar has been developing ways to more efficiently cool electronics for the past 37 years by taking advantage of how liquid captures heat when boiled into a vapor.

“Ford has been actively involved in battery research and electric vehicles dating back to the days of Henry Ford and Thomas Edison,” Miller said. “We’ve secured more than 2,500 U.S. patents in electrification technologies and we have more than 4,000 more pending. Working with Professor Mudawar and his students is the perfect fit to help us research the charging solutions of the future.”

Ed Francis wrote on November 12, 2021 - 11:34am Permalink
Swing by any Tesla 240 kW Supercharger to have a look at a high powered system using liquid cooled cables. These have been in production for a couple of years, and seem to be working well. Is this what Purdue is hoping to replicate? There are a number of them in Indiana to go look at.
Marc Stern wrote on November 17, 2021 - 4:05pm Permalink
The next time I pass a Tesla charging station in my travels I'll take a look. The key to the Purdue-Ford research seems to be cable size and usability. Looking in back of things (sort of like behind the curtain in the Land of Oz) it seems that is what they are striving for.
ed francis wrote on November 17, 2021 - 10:45pm Permalink
I don't think so. Pretty sure the real limitation at this time is how quickly batteries can absorb power. Tesla's new 4680 is the true state-of-the-art cell, and I don't think it is much faster than their 2170 in power absorption. If the cells could take more power, I am pretty sure that Tesla would double the charging system voltage and/or increase the cable cooling.

LG's New EV Battery Plant Is a Welcome News for Tesla
Tesla Giga Berlin's New Hurdle: It's Not Only the Gov't, but Now Tesla Itself
END_OF_DOCUMENT_TOKEN_TO_BE_REPLACED