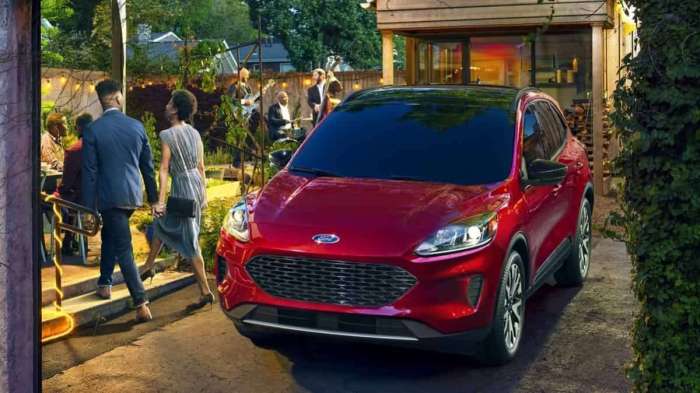 At last, pricing has been released for the Ford Escape Plug-In Hybrid lineup. The lineup, which features batteries that are 13 times larger than other Escape hybrid models, includes four models from the SE to the top-of-the-line Titanium.
Advertisement

Much of the time, if you were able to look over the shoulder of an internet user reading a story about new-car pricing, you would see it is pretty slumber-inducing. And, if you could watch others who were reading the same material, you would also find their eyelids growing heavier and heavier with each mention of a vehicle’s base price. By the time they reach the end of the article, the mere mention of the sleep-inducing words destination fees has everyone looking at the article nodding off with snores aplenty leaving the room.

This year, though, you certainly can’t say there would be snoring about the Ford Escape Plug-In Hybrid. Green Car Reports revealed news coming from Cars Direct, both parts of the same publishing group, that Ford will introduce the manufacturer’s first-ever plug-in hybrid in the second quarter of 2020. The Escape has been line has been redesigned for 2020.

The 2020 Escape SE Plug-In Hybrid carries a largish battery for all-electric use. At 14.4-kwh, it is 13 times larger than the 1.1-kwh standard battery pack used in the rest of the Escape Hybrid lineup.

Green Car Reports relayed pricing information from CarsDirect. CarsDirect saw a dealer ordering guide from which it was able to determine 2020 Escape Plug-In Hybrid pricing. For 2020, the Ford Escape SE Plug-In Hybrid starts at $34,235, including the destination fee. Like the standard 2020 Escapes, the Escape SE Plug-In Hybrid features an array of safety tech. The safety tech includes automatic emergency braking with pedestrian detection, blind-spot warning, and automatic high beams. Other extras include post-collision braking and a “pedestrian alert sounder.”

The Escape SE Plug-In Hybrid features 18-inch aluminum wheels, LED headlights and taillights, tinted glass, and a six-inch touchscreen with SYNC 3. Its voice-activated NAV system pairs with the adaptive cruise control option. It is a $695 option. The Escape SEL Plug-In Hybrid starts at $36,815 and features a hands-free power liftgate, fog lights, roof rails, remote starting, reverse-sensing, plus sportier seats, and an optional $1,495 panoramic roof. The Titanium trim sits at the top of the range and starts at $40,030, adding premium features like a 10-speaker Bang & Olufsen sound system, wireless charging, and acoustic glass. It also boasts a 12.3-inch touchscreen, leather-trimmed seats, and the full range of driver assistance features plus park assist. Torque News writer Eric Way takes a the 2020 electric Chevy Volt. It is one of Chevy's last cars.

With its largish battery, you might wonder about the range of the plug-in Escape Hybrid? It’s a good question, and Ford has provided a bit of the answer. According to the Green Car Report, the plug-in Escape Hybrid will offer 30-plus miles of electric driving range. The Escape Plug-in Hybrid probably achieves it is by driving only the front wheels.

No All-Wheel-Drive For Escape Plug-In Hybrid

At present, all-wheel-drive isn’t available. The reason the Escape Plug-In Hybrid is offered only in two-wheel-drive is purely mechanical. Because of the size of the largish 14.4-kwh battery, there is no way to make the connection to the rear wheels.