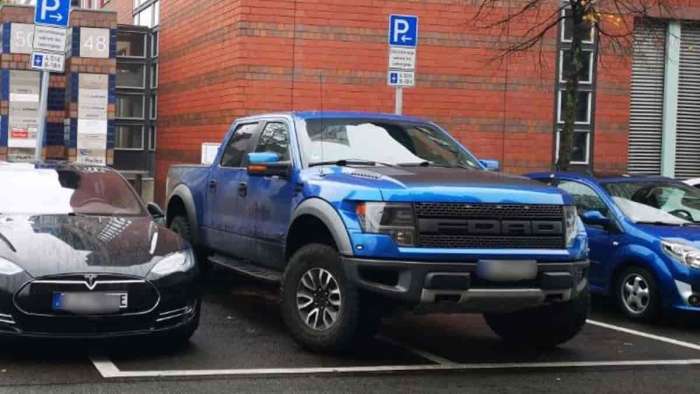 For European Raptor Owners Who ICE, A Tow Hook And Crane Are Waiting

There seems to be a lot of pushback developing over electric vehicles in Europe. Called ICEing, it relies on full-sized American pickups like the Ford F150 Raptor to park in charging lanes so that EV drivers can't "fill up." Berlin's police department is having none of it and is doing some pushback of its own.
Advertisement

If you own a truck in any major city, you probably have had this type of recurring awful dream. It goes like this: After a long, tough day’s work, you get home and park your truck – say a Ford F150 Raptor -- in a space at the front of your house and go inside. Then, after a couple of glasses of wine with dinner, you doze a bit on your living room couch. As you nap, you think you hear a diesel engine idling outside, the type used in small cranes, for example. And, as you run out in your dream, you see a crane busily picking something up; it’s your truck. And you wake up with a jolt, remembering that it’s only a dream, probably brought on by your tough day and the vino.

So, you doze again, and the dream restarts. However, the scene shifts a bit. It’s still the front of your house, and the crane is still there, but now, as the dream unfolds, you see your truck being lowered onto a ramp truck as a mechanic waits with chains for your truck’s wheels and come-alongs to tighten things up. At this point, you feel like racing up to the policeman in charge of the operation, telling him to leave the truck along, but you can’t move, and you wake up and go out to the front to make sure your pickup is there, but …

Something is going on in Europe. It’s a trend where owners of large American-style pickups with traditional internal combustion engines (ICE) like Ford F150 Raptors seem to get super-upset when they see an electric vehicle (EV) charging station. And the inevitable result with some of the owners; they try to block the site when they park. It is called “ICEing” or blocking the charging stations with their vehicles. Quite often, an EV owner will roll up to a charging station only to find there is no way to access the site.

So, what happens next? It seems like a harmless practice, right? No one has been hurt; the only issue is that EV owners can't recharge at the blocked site. And, if they can't use the blocked site, all they have to do is go to another, right? Some European police departments don't view it so lightly.

In Berlin, the police don’t view this as a simple or laughing matter. After arriving on-scene and checking things out, the police found that other cars were parked quite closely around the hulking truck that was the biggest vehicle at the site. However, despite the close working conditions, the police were able to move a crane into the right position and lift the pickup out of the charging space. Once in the air, the pickup was neatly dropped onto a ramp truck that carried the pickup off to impound. 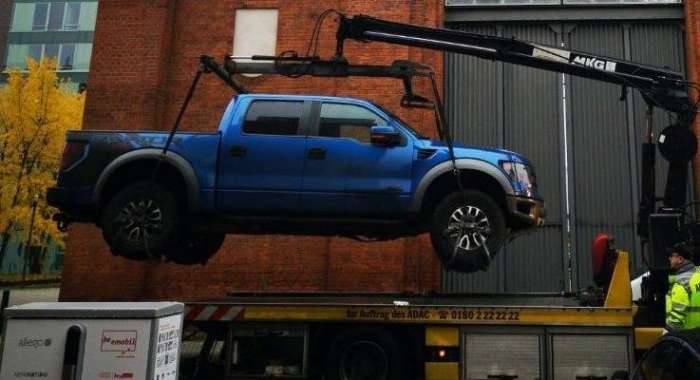 Though no one in the police department commented on the incident. It is almost a certainty that there is a big fine awaiting the owner of the Raptor. And, there is the towing charge and any impound charge the police may want to charge, as well.

And, while Ford Raptors and other full-sized American pickups and SUVs aren’t all that common yet on the narrower roadways that make up the European highway network, the trucks do face the problem of being bigger than existing parking spaces and broader than many smaller roads. Who knows how long this situation will last as full-sized electric pickups are now in the offing. Those owners who continue to practice ICEing may just be spiting themselves because Ford will soon be coming out with their electric pickups, as will others, so more trucks will be using charging stations, as well.

To be fair, there is always a possibility that the owner of the Raptor may not have been trying to ICE out EVs. Quite possibly, the truck owner needed a broader space to park. The EV charging site was there and available. It was larger than other spaces open, so the truck was left there. In the end, the results are the same. One commenter opined after the incident that he was impressed by the fact that European tow companies used cranes that were strong enough to pull Ford F150 Raptors out of tight spaces, but they do, and they did.

Marc Stern wrote on November 15, 2019 - 2:16pm Permalink
If you have a thought about this story, please forward it along to me here.