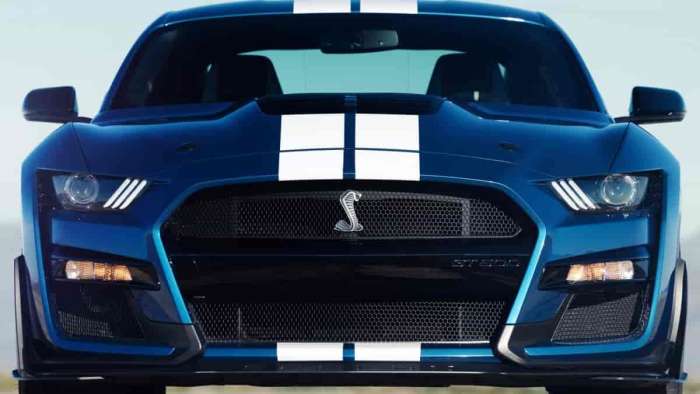 If you have been questioning what could be the high-pricing of some pickups, like high-end Ford F150s, think about this: there are dealerships out there adding huge amounts to the pricing of new Ford Mustang Shelby GT500s.
Advertisement

As the Ford F150 Reporter for Torque News, I have run across some complaints about the prices that some dealers have pinned on a few pickup models. Some of those prices start near just over $70,000 and climb from there.

And it doesn’t keep pickups from selling well – an understatement – so while folks continue to complain about the pricing, those high-end pickups are rolling off dealer lots at a pretty good clip. And, to be honest, with the average pickup price starting at close to $40,000, it also doesn’t take much of an upfit to push even average XLs and XLTs well past $60,000, though, most dealerships do manage to keep the pricing reasonable enough so that customers can purchase the pickups.

So, what does a customer get when the price on a pickup starts at near $70,000 and quickly jumps? It depends on upfits. For example, a lift kit, and new, Fox 2.0 front suspension parts, as well as 30-inch wheels and tires can add a pile to a pickup. And, interior additions, such as heated rear seats and a top-end, sound system, contribute to the amount. (Fortunately, Ford equips its pickups with lots of technology that higher-end buyers don’t have to pay for.)

So, if there are buyers for expensive high-end pickups and they are moving well, it also makes sense that unique Ford cars with huge prices on them will sell well, too. Let’s face it; if there are buyers for pickup trucks that are up there in the stratosphere of high-priced Ford F150s, like well-optioned Limiteds, then it isn’t hard to see why or how dealers can get large amounts for extraordinary Mustang models like the Ford Mustang Shelby GT500. Whether the dealers will get the prices, well, that’s another story. And, my colleague Jimmy Dinsmore explores the story of a very special Mustang used in the movie Bullitt.

Which dealership gets the honors for this price? It is DCH Ford in Thousand Oaks, Calif. The dealership has a Shadow Black 2020 Ford Mustang Shelby GT500 on its lot that lists for $73,995 as its starting price and that’s pretty much the story. Indeed, says Car and Driver, the GT500 doesn’t even have the $18,500 carbon-fiber Track Pack. The Track Pack adds 20-inch exposed carbon-fiber wheels shod by Michelin Pilot Cup Sport 2 tires, Recaro racing-style seats, plus a carbon-fiber rear wing. And, there are no exterior adds like a $10,000 racing stripe, as well.

More Than One Dealership Has High Premium

You might think that DCH is the only Ford shop that is trying to rake in a ton of money from the GT500, it isn’t. No, Koons Ford, in Sterling, Va., is offering a GT500 for $145,890. Yes, it is an improved price, but still, it is a ton of money. This one has more equipment, according to Car and Driver. It has “the carbon-fiber Track Pack and racing stripes. The dealer is calling it the ‘Golden Ticket’ GT500.”

Source: Car and Driver via MSN

DeanMcManis wrote on December 21, 2019 - 1:15am Permalink
Excessive dealer mark-ups are nothing new. Many specialty and low volume models are regularly marked up at dealers. Some so high that even the dealers realize that the car will never sell for that obscene price, but the special cars still bring in foot traffic to dealer showrooms. Thankfully the equalizing force for this is con-job madness is always simply better priced competition. Of course for the new GT500, my mind immediately goes to the 2020 Corvette Stingray, with a starting price of $60K, 0-60 in 3 seconds, great handling and styling that looks like a European Exotic. With the promise of even faster models due over the next couple years. The last GT500 had high dealer markups as well, and my mind always goes to the 2007 Shelby GT, where dealers advertised low volumes of this special model and hinted at the Shelby's appreciating collector's status had marked up the price to $75K-$80K, but in reality the Shelby model only had 15HP, stripes, and wheels over the regular Mustang GT which had a great base MSRP of $25,695, and the $50K+ difference was just dealer greed and profit. Well the new GT500 is far more than stripes and wheels, but really any GT500 priced over $100K starts competing against some amazing cars, especially used high performance cars. The list is long and impressive. Of course that won't deter die-hard Mustang fans from buying their new performance king, the GT500. But the world has changed in the last decade and savvy buyers can shop online all across the country in seconds, and check with other GT500 buyers on Mustang Forums to get their favorite GT500 for close to MSRP, and just have it shipped across the country to save tens of thousands of dollars on the purchase.
Marc Stern wrote on December 21, 2019 - 12:10pm Permalink
Great observations and all true. You have made several good points, as well. Here's an anecdote from the annals of my sales career that shows you are right. About a dozen years ago, I worked at a Ford deal and there was a young salesman who kept on talking about the whale of a deal he landed on the lone Shelby Mustang on the lot. There was a $25K markup on it -- as I understood it -- as well as the usual profit level for the dealer. Well, the young sales guy kept on talking about his great deal for months, but the buyer never came. The no-show buyer never did reclaim his $1,000 downstroke, though I suspect he contacted his credit card and had it erased. And, the kid kept on calling and waiting. He was a good salesman, too. The customer was a real jerk stringing him along like that. I guess he didn't realize that those fees were our living or maybe he just didn't care. Thanks