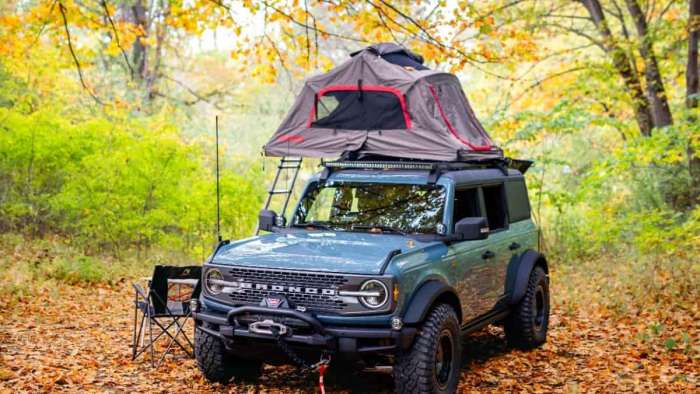 There is lots of excitement at Ford now as the automaker's Bronco SUV line and its F-150 lineup can bring owners to new adventures. The Bronco introduced the OG with which the SUV line can take drivers to new experiences off the grid. The F-150 is offering virtual excitement.
Advertisement

Perhaps the most iconoclastic vehicle of the last half-century has been the Ford Bronco. From its relatively humble beginnings in 1965 as a competitor to the Jeep CJ5 and International Scout, the Bronco quickly attained rock-star status. Indeed, its 1969 victory in the first Baja 1000 helped propel the Bronco to superstar status. Today, models like the Bronco OG keep the name in front of customers and help drivers get off the grid.

When it went on sale 50 years ago, the Bronco defined the two-door, 4X4 genre better than any other vehicle in its class. Indeed, the competition that grew established a key segment that today is a significant component of the automotive market. Over time, the Bronco has become a classic. One of the keys to its classic status was its early exit from the market.

From about 1970 to 1990, the Bronco was one of the major players in the two-door SUV market. For years, the Bronco defined its market segment. It was able to stay at the leading edge of this market. Meantime, as the 1980s turned into the 1990s, the Bronco lost a step or two to its competition. By the time 1996 rolled around, Ford pulled the plug on the SUV. The manufacturer never thought, of course, Bronco might come back.

No one was able to judge the depth of the number of Bronco loyalists out there. According to various recent reports on the Bronco's revival, many underground corporate supporters skillfully used their positions to promote a renewed Bronco. The Broncounderground was actively promoting the SUV at any chance they could get. And, while the Broncoundergound pushed the Bronco brand and concept whenever it could. My colleague Jimmy Dinsmore discusses Ford's virtual tour program for the F-150.

That promotion began having major corporate victories about half-a-dozen years ago when pen-and-ink concept images began making the rounds. With each iteration, the Bronco gained more supporters. Soon clay models began appearing on the stands of various auto shows. About four years ago, the manufacturer made its commitment to the renewed Bronco concept. In 2016 Bronco test mules made their appearances on the roads around Dearborn.

Covered with lots of camo, each test mule represented another step in the renewal process. By the time the test mules finished their runs, the Bronco Brand and its models – the four-door, the two-door, and the Sport – were realities. Their lines were thoroughly modern retro. And, while they were great retro models, they were still modern. Where the original models used slab-sided body panels and squared corners, the new Broncos featured far softer lines and rounded corners.

In honor of the largest North American gathering of classic Ford Broncos, the Bronco brand, Ford's new outdoor brand, debuted an all-new, one-of-a-kind four-door Bronco OG Concept to kick off this year's Bronco Super Celebration East in Townsend, Tenn. Based on the all-new Bronco four-door model, the concept will be on display at the annual off-road event alongside the all-new Bronco two-door and Bronco Sport 4x4 models to give fans a chance see them in-person for the first time.

With personalization and factory-backed accessories essential to the Bronco brand and it's only 4x4 family of off-road SUVs, the Bronco developed the OG concept. The OG Concept showcased how the all-new Bronco two-door, four-door, and Sport models redefine off-road vehicles' next generation. 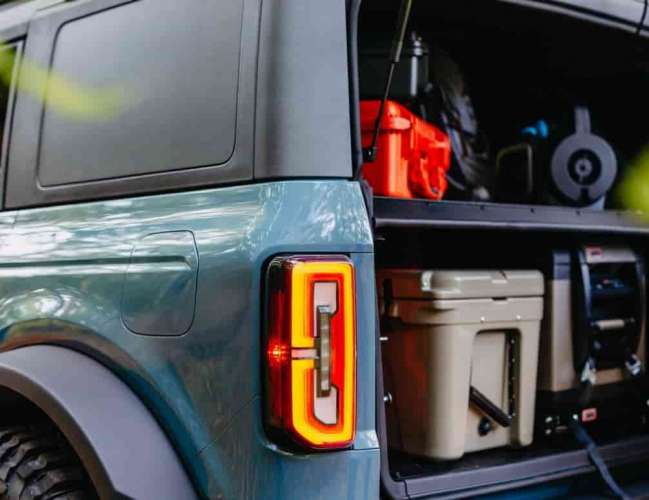 On top, a Heavy Duty (HD) two-person tent from Yakima™ and a factory roof rack are mounted to the Bronco roof rails with a 1x40 RIGID™ with a front rack-mounted light bar and six additional RIGID POD lights in a 360 configuration for improved lighting all around the vehicle. The designers used the rear-bumper-mounted CB antenna as a spotter flag.

In the rear cargo area, the development team installed food storage and eating areas. The team also used an interior cargo management system for accessory control. The accessories include a water tank, ARB refrigerator, cooking kit, and stove. The fridge has a slide-out tray for easy access, and a tailgate table and chairs complete a dining area.

To learn more about Bronco and Bronco Sport, go to Ford Bronco Info.

Ford called the vehicle a Ford Bronco Overland Concept and has corrected the statement to include the appropriate name Ford Bronco OG Concept. Ford certainly would not want anyone to associate the all-new, extraordinary Bronco lineup of vehicles with its SUVs competitors.