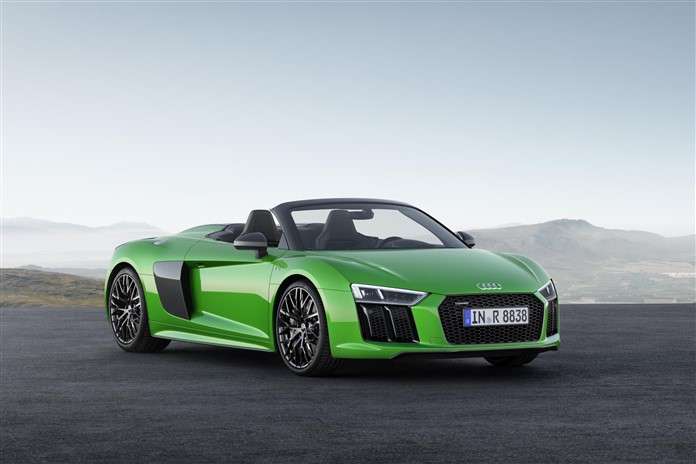 Monterey Car Week is a great place to introduce a hypercar like the Audi R8 V10 Spyder. It is Audi's fastest production convertible, hitting 60 in 3.3 seconds. The intro is planned at Friday's Quail, a Motorsports Gathering.
Advertisement

Monterey Car Week is famous for the vehicles it shows and, sometimes, for the cars debuted. This year will be no exception as Audi uses the famed motoring event to debut its R8 V10 Spyder.

To celebrate its long and successful motorsport tradition, Audi will also use the venue to showcase the race cars that have inspired their production counterparts, the R8 LMS GT3, the RS 3 LMS and the R8 LMS GT4.

Friday, the R8 V10 Spyder will debut at The Quail, A Motorsports Gathering. It is a world-renowned event that features some of the world’s best and rarest collections of vehicles. R8 Spyder Debut Planned at the Quail

The R8 is Audi’s pinnacle of performance. No other models, says the automaker, bears a closer tie to racing. The R8 features the same naturally aspirated V10 engine found in the R8 LMS race car. It is the best representation of how production models benefit from motorsports developments. The hypercar’s 5.2-liter V10 moves the Spyder from 0 to 60 in 3.3 seconds, making it the fastest production convertible Audi has produced. The transmission that transfers the power to the wheels is a seven-speed S-tronic ™ dual-clutch tranny.

Alongside the V10 Spyder, Audi’s will display the all-new RS 5 Coupe, the R8 LMS GT3 race car, and the legendary Audi Sport Quattro S1. Incidentally, this year is the 30th anniversary of Walter Rohrl’s record-setting run up Pike’s Peak in the S1.

In addition to the introductions, Audi plans to offer guests the opportunity the chance to participate in an Audi Sport Performance Drive that puts them into the driver seat of an R8 V10 for a tour of the famed Mazda Laguna Seca Raceway.

This year’s Monterey Car Week Reunion will also showcase the race cars that have inspired their Audi Sport production counterparts.

The automaker will display the R8 LMS GT3 which shares about half its parts with the R8 street car; the RS 3 LMS, a track-ready race car from Audi Sport, and the R8 LMS GT4, which shares more than 60 percent of its assembly components with the road-approved Audi R8 Coupe.

The Audi Sport brand is new to the automaker. The brand launched at this spring’s New York International Auto Show. Audi Sport brings a lot to the table.

It led the development and manufacturing of the Audi R and RS models. Audi sport also offers customer racing, the Audi collection, and Audi Sport performance parts. For more information, you can contact Contact Audi For More Info.

LG's New EV Battery Plant Is a Welcome News for Tesla
Tesla Giga Berlin's New Hurdle: It's Not Only the Gov't, but Now Tesla Itself
END_OF_DOCUMENT_TOKEN_TO_BE_REPLACED