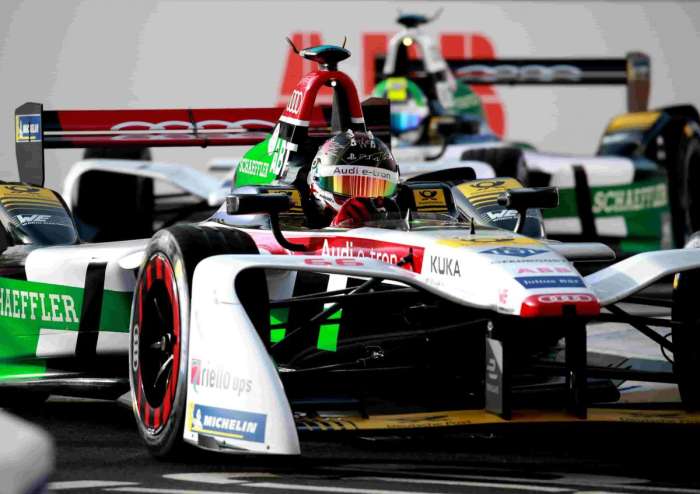 As the Formula E series comes down to the wire in New York City, Audi's factory team finds itself in second place but within an easy shot of number one.
Advertisement

When the flag drops on this weekend’s E-Prix in New York City, there will be a couple of changes on formula race. First, Audi of America will be returning to the ABB FIA Formula E Championship chase, planned for today and tomorrow, in Brooklyn.

First Appearance of the Official Team

And, second, this race marks the first appearance of an official factory team with two Audi e-tron FE04 cars on the circuit. The sponsor of the race is Qatar Airways.

Audi Sport Team ABT Schaeffler and its drivers Lucas di Grassi and Daniel Abt are currently in second place in the team standings. There are only 33 points between the Audi team and the leader as the flag drops in New York on the last epic of the season.

Coming off a historic win at the June 10 Zurich E-Prix, Lucas di Grassi is now in third place in driver standings. Di Grassi has his eye on the podium in Brooklyn.

In other results this season, ABT Schaeffler had a clean sweep at the Berlin E-Prix, and they secured the first E-Prix win on Swiss soil last month in Zurich’s race. So far, VW is within striking distance of the team championship. So now, it has 186 points to date, and it needs 33 points to take the title.

In an era of electrification, the Audi Sport mantra – “tested on the track, built for the road” – is reinforced by its factory presence at Formula E.

As the Audi Sport Team, ABT Schaeffler FE04 cars take to the track, Audi’s fan experience at the New York City E-Prix will feature the brand’s on-road approach to electrification with the e-tron prototype SUV. The e-tron is the automaker’s first effort an electric vehicle for customers.

Race fans attending the Formula E final will be able to see the prototype, which is similar to the production version of the Audi e-tron vehicle that will debut this fall and will begin arriving at customer driveways in 2019.

The fully electric Audi e-tron is a five-passenger SUV, aimed at the heart of the premium market. With a progressive design, advanced electric and digital and digital technology, customers can go electric with no compromise.

The e-tron is the first of three battery-electric vehicles that Audi plans to debut by 2020. Audi sees about 30 percent of its customers going electric by 2025.