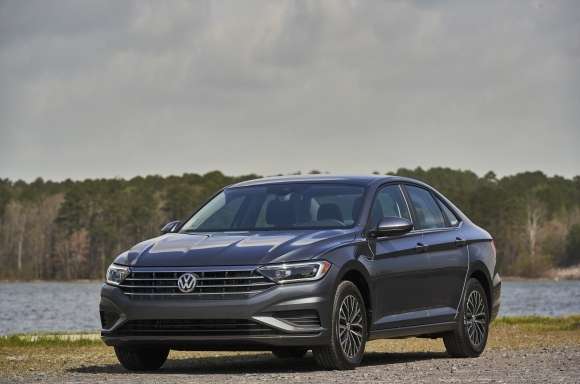 For 2019, VW Beefs Up Auto Line With Next-Gen Jetta

During the last couple of years, Volkswagen has been concentrating on its newest entries, its SUV/crossovers, the three-row, intermediate Atlas and the Tiguan. For 2019, VW has totally updated the Jetta into a new model that shares its platform with the Golf.
Advertisement

If you had asked anyone who follows Volkswagen a couple of years ago what the future held, the answers likely included lots of “I don’t know,” or “Say, what?” Now, we know what has happened. VW added a couple of three-row crossovers to its lineup (the Atlas and the reworked Tiguan). And, it reworked its passenger car lineup.

And for 2019, a VW added a new generation Jetta to its lineup, while it made plans to bid the iconic Beetle goodbye (for the third, but not likely the last, time). The new Jetta shares the more advanced platform – MQB – with the Golf. VW’s turbocharged 1.4-liter engine powers it. The engine delivers 40 mpg on the highway, while still giving the model decent passing capability.

With all of this said, let’s take a more in-depth look at the Volkswagen lineup for 2019.

Volkswagen cut back the Passat lineup for 2019. The Passat GT is gone as the line has been trimmed to the Wolfsburg and the SE R-Line trim levels. Volkswagen has made active safety tech standard.

For 2019, the Jetta the automaker did a total redesign. The next-gen compact is available in S, SE, and SEL trim levels. The standard powerteam is the turbocharged 1.4-liter mated to either a six-speed manual or an eight-speed automatic. While active safety tech is standard on most of the line, it is optional on the base level trim. A sporty Jetta GLI is set to follow sometime later this year.

Meanwhile, 2019 non-GTI Golfs the standard powerplant is VW’s 1.4-liter turbo-4. Last year, the standard powerplant was the 1.8-liter four. Also, VW is offering a limited-run GTI Rabbit, apparently in honor of the original version of what became the Golf, the Rabbit, a model that made until 1982. The rest of the Golf family, a VW terms it, features minor changes.

Following last year’s major revision where the carmaker added length, width, and added seating, there are no changes planned for the 2019 Tiguan.

Introduced in the early summer of 2017 as a 2018, the automaker’s intermediate SUV/crossover, the three-row Atlas competes against models such as the Honda Pilot, Toyota Highlander, and Nissan Rogue. Indeed, it is doing quite well against them. For 2019, the significant addition for the new model year is automatic emergency braking.