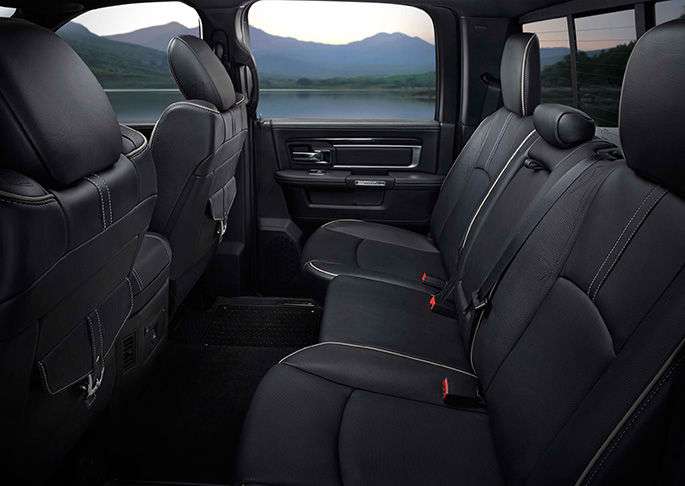 Why some 2016 Ram 1500 owners find the headrests uncomfortable

One of the hottest topics on a Ram truck forum right now was started by a Wisconsin owner who loves to hunt. He says the headrests on his 2016 Ram 1500 gave him a neck ache. Hunt says “I have one gripe about the interior but I knew it upfront, seems like a lot of vehicles are like this for safety reasons (whiplash prevention). The headrest is too far forward for my comfort and pushes my head forward a little. I have tried every position and just couldn't get it in a happy place. What I ended up doing was flipping it around backward which works okay. Probably not the ideal solution from a safety perspective, but better than getting a neck ache. I wish it had a little more adjustment.”

Hunt isn’t alone. Other 2016 Ram owners quickly joined the discussion. Yankee says “I reversed mine on both the '09 & '16. Because the '16 rear seat headrests are way too tall, i took them completely out.”

A 2014 Ram owner, from California, agrees. “Damn uncomfortable headrests in my Laramie Ltd. How is this an improvement? Might flip mine and see how that goes. Was looking for more comfortable aftermarket rests.”

The owner of a 2013 Ram 1500 says he has heard others complain. “Some people move their rear headrests up front and find it more comfortable.”

A number of contributors who are taller say that the headrests do not cause problems for them. It appears to really affect shorter drivers. One 2016 owner says, “My wife is 5' 2" she has issues with all the new head rests, on her 16 cherokee i turned the head rest around.”

While the discussion doesn’t solve the headrest issue, a number of the Ram owners inquired about how to remove the rear headrests. “How do you get the rears out? I tried and failed. They really block visibility out the back.”

Aaron replied that it is difficult to get the headrests out because they are so big. You may have to tilt the seats slightly forward to maneuver them. “Both rods have tabs that need to be pushed in for the headrest to get out. Push the tabs in and then push your fingers into the seat lifting the headrest up. It was a bear to get them out. I actually had the back of the seat off so it was a bit easier because the top of the headrest will hit the roof.”

Bob, from Michigan, says the headrests may be uncomfortable but they work. “I'm not a supporter of a lot of things mandated but air bags and headrests work. 16 yo grand daughter pulled out in front of a pickup truck doing about 50 mph in her parents new Buick. Truck hit the drivers door/cowl area. Every air bag in the car went off as well as the one in the truck. Driver got out checked on the grand daughter who also walked away.
Bottom line she and the other driver were unhurt, she learned a lesson she'll never forget and we still have her instead of just a memory.”

It is important to remember that the headrests are mandated for a reason, to prevent or lesson. There may be more comfortable ones available in the aftermarket, or some adjustments that can be made to make them fit you.

See you in my latest story discussing the durability and popularity of the 2020 Jeep Wrangler Ecodiesel.

Ram Aman wrote on March 22, 2018 - 5:25pm Permalink
The issue is that the new headrests do not allow a person with half decent posture to sit normally. I don't understand how forcing your head 3-5 inches forward prepares you for whiplash prevention. Posture guide: @ @ @ I - good I - bad / - riding in a new truck I I /
Teri Bulposture wrote on June 2, 2018 - 9:28am Permalink
Ram Aman, I agree completely. I refuse to buy a vehicle that makes my neck hurt from the forced forward posture from a headrest. It is simply not ergonomically correct and is causing people to have trouble with their necks and backs. We ran into this problem again while trying to buy a slightly used Ford xlt 4x4 pickup. I gave the dealer my email address and told him to send me a link to the additional back cushion he is recommending to alleviate the issue. My husband and I both let him know that we love the truck, but this is a big deal and will keep us from buying. This particular headrest cannot be removed to be turned around.
Steven Marino wrote on July 18, 2018 - 10:41am Permalink
I just leased a 2018 left over at a good price, BUT the front head rest is too far forward. There is no adjustment to the tilt and it is tilted too far forward for my height. I removed the rear due to "0" visibility with them in place. So i switched out the driver to test it, so far much better. Any safety issues?
scott platko wrote on December 6, 2019 - 1:29pm Permalink
I tool the ones from my 2016 ram laramie from the rear to the drivers seat, I may just find 2 additional rear headrests to replace the fronts
Cheri Martin wrote on March 9, 2020 - 12:04pm Permalink
The headrest is absolutely miserable!! The passenger side headrest will sit straight up and down ;however, the driver side has your head forced down!! I have to lay my seat back way too far just to have it so I can sit up straight!! I HATE IT! I will not be buying a Dodge ram again because of this very reason.