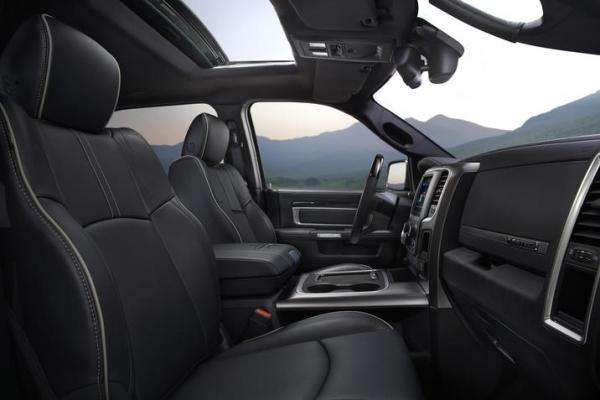 You see all sorts of terms for leather when you are picking out a new vehicle. What does the description "leather trimmed" mean when you are looking at a 2017 Ram 1500?
Advertisement

It can be very confusing as you are shopping for or ordering a new vehicle when they throw around terms like leatherette and leather-trimmed. How do you know exactly what is leather in a 2017 Ram 1500? A potential buyer asked that question of a popular Ram truck forum.
Extra, from Florida, asked the group, “Guys - The C**** FL Ram dealer emailed me, "It's called leather trim but it is all leather." Is that True??”

Joey responded, “Nope, there is very little leather in these new trucks. The majority of the front seats is leatherette & the entire back seat is leatherette. An exception is the Limited & maybe the Longhorn. The Limited has really beautiful leather seats.”

It turns out that buying truck seats is a lot like buying a leather couch. Often what you sit on is leather, but the sides and back may not be.

Rob, from Arizona, says, “Limited and Longhorn are the only Rams with full leather front and back. Laramie and the Sport optional leather seats have real leather on the front seating surface only. Sport standard seats with the cloth inserts are leatherette (fake leather or more commonly known as vinyl). Everything else is either vinyl or cloth.”

Extra appreciates the other owners being straight with him. “Thanks guys. I'm trying to special order a Laramie with real leather seats, telling them I want the Limited's seats (or cloth, that'd be fine; just don't want the leather trimmed).”

Jake, from New Jersey, says that the seats were the deciding factor for him when he was checking out the trim levels. “I wanted a Laramie. IMHO it's the sharpest looking of all the RAMs. However, during my extensive research I was told that the Longhorn had way better seats. I upgraded to the Longhorn specifically to get the better seats. Additionally, there are several threads out there (with pics) complaining about the Laramie seat-bottoms stretching and bagging. No such complaints exist about the Longhorn seats.”

Monster, from Michigan, seconds Jakes opinion. “I can tell you, there is a significant difference in seating comfort between the Laramie and the Limited/Longhorn seating.”

Big, from Ohio, says he has been pleased with his leatherette or vinyl seats. “I like my fabric/vinyl sport seats. The vinyl on the sides stands up to sliding off the side of the seat better than any fabric or leather seats I've had. Mine still look brand new after three years.”

Extra says the question about the leather content is affecting his decision about what truck to order. “BTW now I'm looking to get a Limited without the air suspension, instead of a Laramie, mainly to avoid the leather trimmed seats.” Extra was waiting on the dealership to get back to him on what his options are for the trim level he wants.

It is important, especially when you are spending that much on a vehicle, to know exactly what you are getting. There have been complaints on the Laramie seat bottoms stretching out and wrinkling. That problem seems to be tied more to the amount of padding or batting that they are using in the foundation of the seat. There are far fewer complaints about the Longhorn and Limited leather seats. Using fewer leather components is a way for the manufacturers to cut costs. Know what you are buying before you sign on the bottom line!

Eric wrote on May 2, 2019 - 2:22pm Permalink
I have a 2016 ram 1500 Laramie and it only has 18,000 miles on it and the seats are garbage. They rip very easily and I have a rip in one and a seat all the driver side is ripping and has two little tears in it barely and it's started tearing when I only had twelve thousand miles on the truck. What kind of quality do they make any more? Obviously, not good quality, for how much money you pay for expensive things.
Luis LeFort wrote on August 14, 2020 - 11:15pm Permalink
I have a Laramie with 60k miles and the seats look like it just got out of the dealership, I dont think the seats are the issue here

LG's New EV Battery Plant Is a Welcome News for Tesla
Tesla Giga Berlin's New Hurdle: It's Not Only the Gov't, but Now Tesla Itself
END_OF_DOCUMENT_TOKEN_TO_BE_REPLACED