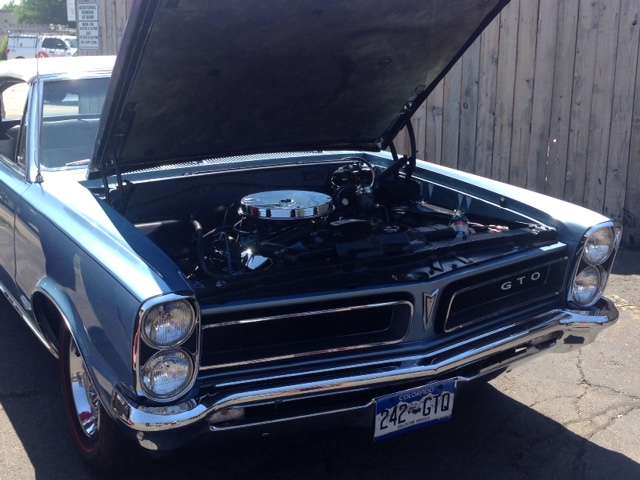 The mile-high city is quickly becoming known as a great market for classic vehicles. Representatives from Mecum Auction tell us why.
Advertisement

This 1965 Pontiac GTO is one of an estimated 700 vehicles that go up for auction in Denver, CO, July 20-22, 2017. The three-speed muscle car is expected to sell for between $55,000-$65,000. Mecum Auctions is holding its third annual auction in the mile-high city and representatives say Denver is quickly becoming a booming city for the collector market. There are several reasons why.

John Kraman, a spokesperson for Mecum Auctions, says that last year, people came from 38 different states to attend the Denver auction. Sellers from 20 different states consigned their vehicles here. Kraman says that more and more frequently buyers are tying their trips to cities that they want to visit. They come to Denver to take in the scenery, perhaps visit the mountains and also take in the spectacle of the auction. This year's auction will feature an abundance of classic muscle cars and classic trucks.

Denver is also drawing residents from all over the country and they are bringing their love of classic vehicles here with them. Plus, people are realizing Denver’s relatively mild climate is perfect for preserving old vehicles. The state doesn’t use road salt, and it has very low humidity. Body rot and rust are relatively non-existent in most Colorado vehicles.

Denver is known nationwide for being in a boom cycle right now. The unemployment rate is at record lows and is one of the lowest in the country. Virtually anyone who wants to work can find a job. Despite the housing costs that are also rising, many people have money to spend. For many, investing in a classic vehicle is a wonderful way to recapture their youth. A beautiful vehicle is timeless, whether it is a 1957 Chevrolet Corvette, or a 1965 Ford Mustang.

According to Kraman, one of the biggest trends right now is classic trucks. Many people, men in particular, love their trucks and they are interested in collecting classic ones. The Ford F-150 has been the most popular vehicle in the country for decades now. Some bidders are interested in finding or restoring some of the true classic haulers and work horses. Colorado is one of the biggest markets in the country for trucks and the classic trucks are expected to sell well here.

The Denver auction is one of 14 that Mecum holds nationwide. Although it will not be broadcast on television, you are able to watch it live-streaming on Mecum.com. It will also be featured as a live Facebook telecast.