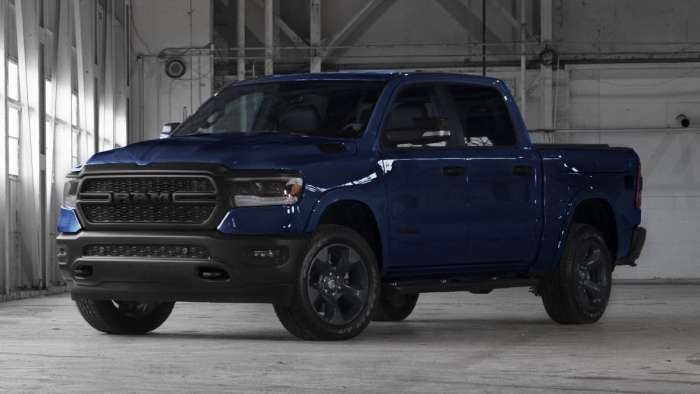 Just in time for Flag day on June 14th, 2020, Ram is launching its second set of “Built to Serve” edition 2020 Ram 1500s. These limited-edition trucks will honor the Navy with special exclusive color schemes. Ram is already building the special edition vehicles and they should start arriving at dealers this month.

Ram announced earlier this year that it would be building special “Built to Serve” edition 2020 Ram 1500s to honor five branches of the U.S. armed forces. The vehicles are not limited to buyers who are in the service, but are also meant to honor people who are community minded. A new "Built to Serve Edition" model, representing another one of America's land, air or sea-based military branches, will launch approximately every three months. Production was delayed due to the COVID-19 plant closures.

This second set of “Built to Serve” vehicles will be available in two colors. Ram will build 1,000 models in Ceramic Gray and 1,000 vehicles in Patriot Blue. These trucks will feature a nautical theme to honor the Navy and feature color schemes that Ram hasn’t used before. The black interior will have Light Ambassador Blue interior accents and special badging. The trucks will also have a United States flag and "Built to Serve" decal on each of the rear quarter panels.

“Ram truck owners, whether civilian or military, are familiar with the 'Built to Serve' adage as it’s something we strive to build into every truck and van we produce,” said Mike Koval, Head of Ram Brand, FCA - North America. "Ram honors those who serve or have served in the United States with distinction and we continue to welcome volunteers to our Ram Nation volunteer efforts.”

Each of the five U.S. military service branches has been or will be honored by Ram with two specially selected exterior paint colors that evoke the spirit, the mission and history of that service. One of each branch’s “Built to Serve Edition” models will be offered in a new low-volume paint option exclusive to this program.

There is a special limited-edition color for each branch of the service. The colors break down this way.

Inside, each of the five branches of "Built to Serve" Ram trucks is accented with unique, corresponding color stitching: Light Frost, Light Ambassador Blue, Light Diesel Gray, Core Green or Orange. Ram "Built to Serve Edition" packages are available on all body styles and all powertrains.

Built to Be Personalized

The “Built to Serve” editions are designed to be customized. Buyers can apply their own patches – regimental, flags, name tapes or slogans – to personalize their "Built to Serve Edition." Front seat back panels are covered with Pouch Attachment Ladder System and Modular Lightweight Load-bearing Equipment webbing so owners can attach additional equipment or pouches.

According to Ram and the U.S. Department of Veterans Affairs, approximately seven percent of the U.S. population is an active member, reserve member or veteran of the armed services. Ram is also highlighting its volunteer push called Ram Nation. Its “Built to Serve” trucks are meant to honor the community volunteers as well.