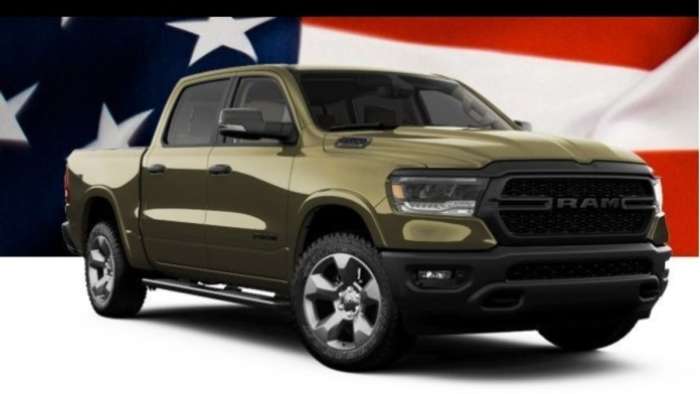 Are you looking to stand out in the crowd? Thousands of 2020 Ram 1500s in striking new colors are soon to be shipped to dealers. The trucks bear paint schemes that Ram has never used before. The different colors will be limited editions and they are in the process of being customized with special packages right now. Friends have seen the trucks in new colors parked outside the Sterling Heights Assembly Plant where they are built.

The new colors have names you probably haven’t heard before like Gator, Anvil, Tank and Spitfire. Ram has a very special reason for the color names and the different hues.

The exclusive new colors are for Ram’s new “Built to Serve Editions”. I wrote about the special trim packages when they were announced before Veteran’s Day. The new color schemes honor five United States Armed Forces service branches.

Two specially selected colors represent each branch. Five new low-volume paints, one for each service branch, are being added to the Ram lineup. The trucks also have military-inspired features that will make it easy for owners to customize their rides. The trucks are also expected to appeal to community volunteers with a program called Ram Nation. Buyers do not have to be service members to purchase the vehicles.

When the special editions were announced, Reid Bigland, the Head of Ram said, “Ram wants to honor those who are serving or have served the United States with distinction. For Ram truck owners, whether military or civilian, ‘Built to Serve’ is a maxim that they can be proud to stand behind. We also want to bring together Ram owners who are not currently serving to make a difference in their communities. We launched our Ram Nation volunteer organization in 2015 as a way to give our Ram truck owners a way to be involved when there’s a need.”

There is a special limited-edition color for each branch of the service. The colors break down this way.

Inside, each of the five branches of "Built to Serve" Ram trucks is accented with unique, corresponding color stitching: Light Frost, Light Ambassador Blue, Light Diesel Gray, Core Green or Orange. Ram "Built to Serve Edition" packages are available on all body styles and all powertrains.

Most Popular Colors for Ram Vehicles

A spokesperson for Ram tells me that they don’t break out sales numbers for their trucks by color, but they do know that black, white, silver and red are their most popular colors, no matter what the trim level. Ram also doesn’t break out sales for its larger, heavy duty trucks by color. However, the new colors are sure to be in demand. A recent nationwide survey of 9 million vehicles by a company called iSeeCars.com found that 77.1 percent of the vehicles, in the U.S., fall in the grayscale. That means the vehicles are black, white, or some shade of gray or silver.

Every year, most vehicle companies do roll out a new color or two, just to test demand and keep up with the new colors that you see in the fashion and home décor market place. This year, Ram highlighted a new blue color called HydroBlue. That is also why recently you have seen various shades of burnt orange and green or olive drab, because they are now popular in other aspects of society. You are also seeing a lot of experimentation right now with matte and satin finishes, even on high end models.

If Ram finds that there is really high demand for the unusual new colors like Tank (a different tan) or Anvil (a different shade of silver) or even Spitfire (a vibrant orange), you can bet that the new colors will become part of the larger line-up.