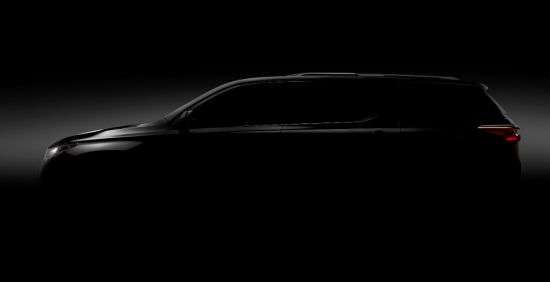 Next generation 2018 Chevrolet Traverse to debut at Detroit Auto Show

Chevrolet is releasing is teaser photo of the next generation 2018 Traverse. It will make its debut at the North American International Auto Show, in Detroit.
Advertisement

Chevrolet confirms today that it is debuting the 2018 Traverse at the North American International Auto Show, in Detroit, on January 9th, 2017. Much like the Buick Enclave and Encore look like siblings, the outline of the 2018 Traverse looks like a larger version of the redesigned 2018 Chevrolet Equinox.

Chevrolet is promising that the new Traverse will still have seating for eight people and that it will offer the best third-row legroom and maximum cargo space for the full-size crossover segment.

Chevrolet says in its news release that the 2018 Traverse will offer the latest in technology including “exclusive D-Optic headlamps that provide a natural daylight effect with a seamless light quality.”

GM is also expected to unveil a redesigned GMC Terrain at the Detroit Auto Show. The GMC Terrain is built on the same platform as the redesigned 2018 Chevrolet Equinox.

The 2009 Chevrolet Traverse debuted at the 2008 Chicago Auto Show. Originally, the Buick Enclave, GMC Acadia, Chevrolet Traverse and Saturn Outlook were all sister vehicles. The Saturn Outlook was discontinued after GM eliminated Saturn. The vehicles’ similarity was changed recently when the GMC Acadia was down-sized. The Traverse is also being down-sized but not as severely as the Acadia.

This is the first big redesign of the Chevrolet Traverse, although it has had facelifts over the years.
In its news release, Alan Batey, president of GM North America says, “Nobody in the industry offers a broader, fresher lineup of SUVs and crossovers than Chevrolet, from the all-electric Bolt EV to America’s longest-running nameplate, Suburban, we’ve got something for every customer and lifestyle.”

Chevrolet says the unveiling of the Traverse will complete the transformation of its crossover and SUV lineup. Many of the stalwarts, like the Suburban and Tahoe, have been freshened or facelifted in recent years.

For Some Former Daimler Managers Daimler Is Authority, While Tesla Is Like a Startup
How Daimler Unintentionally Subsidizes Tesla Giga Berlin
END_OF_DOCUMENT_TOKEN_TO_BE_REPLACED