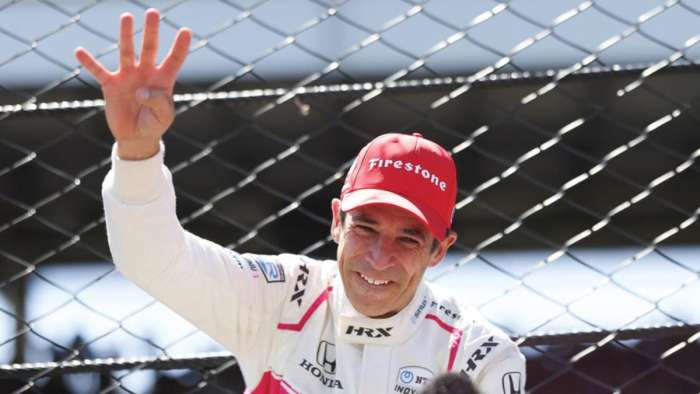 Driving for a new team, Helio proves that he still has the fire to win.
Advertisement

An emotional Helio Castroneves won his fourth Indianapolis 500 and cemented his place in history. Castroneves, who doesn’t even have a full-time commitment as a driver this season, climbed the fence to thank the fans at the track. He yelled, “I love you, IndyCar. I love you, Indy.” After climbing down, Castroneves appeared to weep before removing his helmet. Castroneves, who last won at the Indianapolis Motor Speedway in 2009, was driving for Meyer Shank Racing. It was the first Indy win for the team. Alex Palou placed second. 2019 winner Simon Pagenaud finished third. It was the fastest Indy 500 win in history. The average speed was 190.690 mph.

Helio is only the fourth four-time winner in the history of the Indianapolis 500. He joins A.J. Foyt, Al Unser and Rick Mears in the exclusive club. This was the 105th Indianapolis 500. Helio won his first three times with Team Penske in 2001, 2002, and 2009.

On a personal note, during his two decades with the Penske organization, I interviewed Helio multiple times. He made countless trips to Detroit appearing at Auto Shows, the Detroit Grand Prix and other special events. He was always gracious, warm and funny. After his win on “Dancing with the Stars”, he even agreed to dance with reporters. It was wonderful to see him appreciate his historic win today.

Helio earned the nickname “Spiderman” after first climbing the fence after his win in the Detroit Grand Prix. He continued the tradition at Indy, today.

After climbing down from the fence, a jubilant Helio ran down the track yelling and waving to fans. Other drivers, including his former colleagues at Team Penske came out to congratulate and hug him. Another legend, Mario Andretti, kissed Helio in a dramatic moment.

Age is Only a Number

Helio is 46 and the fourth-oldest winner of the Indy 500. This was his 31st career victory in the IndyCar league. He told reporters after the win "Tom Brady won the Super Bowl, Phil Mickelson won the Masters, and here we go! The old guys are still kicking, teaching the young guys a lesson!"

Ironically, the Indianapolis Motor Speedway is now owned by Roger Penske. The track was only allowed to be at 40 percent of capacity because of COVID restrictions. A sellout crowd of 135,000 watched Helio’s emotional reaction to the win. Last year’s race was delayed until August 23, 2020 and run without spectators.