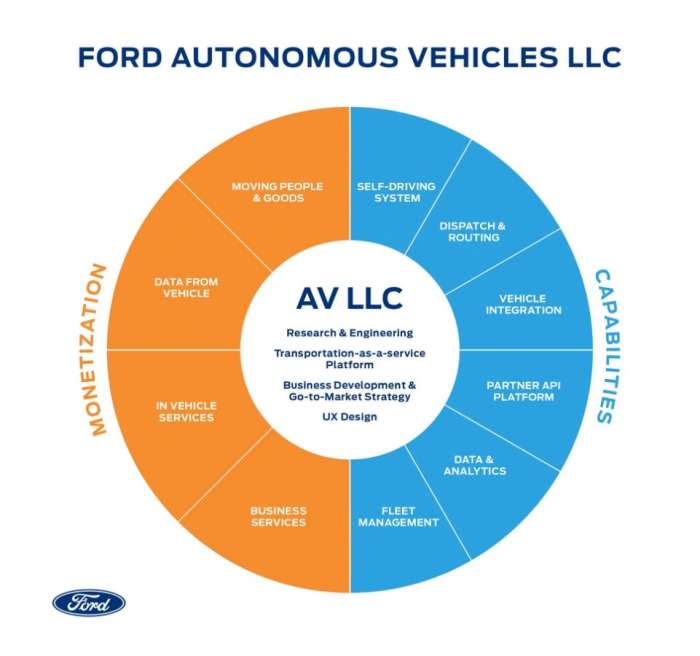 How Ford Will Speed Up its Self-Driving Car Program

Ford is creating a separate company to oversee the development of autonomous vehicles. The new company will be called Ford Autonomous Vehicles LLC and will be headquartered in the Corktown area of Detroit, where Ford just bought the train station.
Advertisement

Ford announced that it is creating a new company to oversee all aspects of its self-driving research and business operations. Ford has held extensive testing of its self-driving Fusion and Transit Connect, but not to the extent that General Motors and Waymo have. The new company will be called Ford Autonomous Vehicles LLC and it will be headquartered in the Corktown area of Detroit.

Ford recently bought the Michigan Central train station, in Corktown, and once it is refurbished, it will serve as the center of Ford’s autonomous driving campus.

General Motors was the first Detroit automaker to establish an independent company to handle its AV operations. General Motors bought Cruise in 2016 and established Cruise Automation as its self-driving subsidiary. There has been talk that Cruise could be spun off as an entirely separate company.

Ford says the new self-driving company will help it accelerate autonomous driving technology and capitalize on market opportunities. Ford committed to investing $4 billion into its AV efforts through 2023. The $4 billion includes the $1 billion Ford spent to buy Argo AI.

“Ford has made tremendous progress across the self driving value chain – from technology development to business model innovation to user experience,” said Jim Hackett, president and CEO, Ford Motor Company. “Now is the right time to consolidate our autonomous driving platform into one team to best position the business for the opportunities ahead.”

Watch Ford Digit: Robot Delivers a Package To Your Doorstep

Ford is perceived as being way behind General Motors in electrical vehicle and autonomous vehicle development.

Ford also announced that it is realigning some of its divisions to speed up product development decisions and streamline global manufacturing operations.

Going forward, Ford wants to produce vehicles on five specific flexible vehicle platforms. Ford says that should help them cut product development time by 20 percent and save the company $7 billion in engineering.

“We’re looking at every part of our business, making it more fit and ensuring that every action we take is driven by what will serve our customers in a way that supports our fitness and performance goals,” Hackett said.

Ernie wrote on July 26, 2018 - 4:42am Permalink
No matter what these rocket scientists do or say, this self-driving car thing is completely misguided and insane. So I'm just suppose to trust the car I'm in, along with all the other combined self-driving cars and manually driven cars on the road all at one time??? ... Then throw in all the other hazards on or near the road (pedestrians, bicycles, animals, debris, potholes, ICE AND SNOW) .... No thanks, it will be far from fool-proof .... The people behind this scheme have their heads totally up their butts and they will have the blood on their hands for all the deaths that will result from this craziness!! .... Could they be trying to make a name for themselves?????