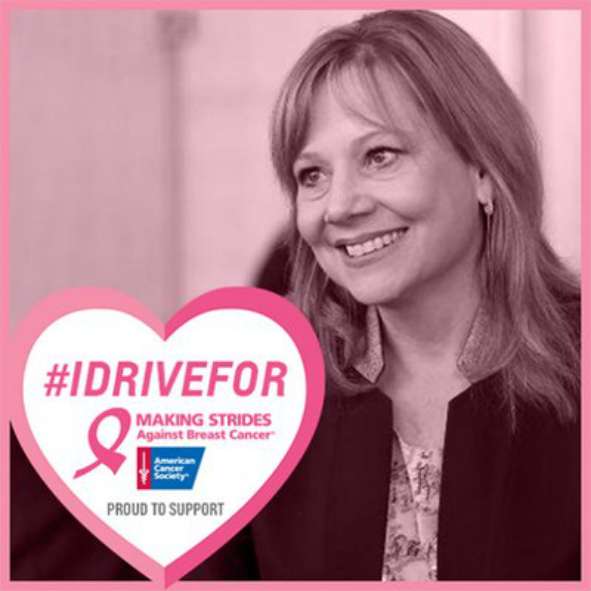 October is breast cancer awareness month and GM CEO Mary Barra is leading the charge in the company's fight against the disease.This is the sixth year that Chevy is raising money for the American Cancer Society through the Making Strides Against Breast Cancer campaign. Chevrolet hopes to top last year's record of $1.6 million.
Advertisement

Chevrolet is putting the power of social media behind its efforts to raise money in the fight against breast cancer. This year, the automaker is donating $5 for every post on Twitter or Instagram that uses their hashtag #IDriveFor (up to $500,000). Mary Barra has made the #IDriveFor hashtag part of her Twitter presence. When the CEO indicates that the cause is important, employees tend to back it as well.

These initiatives are in addition to Chevrolet’s traditional sponsorship of nationwide Making Strides Against Breast Cancer walks. A huge contingent of GM employees will participate in the Making Strides Against Breast Cancer Walk, in Detroit, on October 8th. Last year, Chevrolet set a record for its participation. The automaker sponsored 84 walks and helped raise $1.6 million.

Chevrolet dealerships across the country are also involved in walks. Many also raise money through test drives, donating money for every customer who takes a vehicle out for a spin.

The latest figures show that breast cancer strikes 1 out of every 8 women in their lifetime. Breast cancer also strikes some men although it is not as prevalent. Women purchase more than half of all vehicles and influence approximately 80 per cent of all vehicle purchases.

Supporting breast cancer awareness is a smart business decision. Ford has been dedicated to raising money in the breast cancer fight for many years now. It has its own group called “Warriors in Pink” and is active throughout the year, raising money and helping patients through its “More Good Days” campaign. This year, the automaker is running a sweepstakes, giving away a 2017 Ford Fusion. The contest is also offering a second prize of free organic meals for a year through Green Chef. Green Chef is the first USDA-certified organic meal kit delivery service. This summer, Warriors in Pink also surprised cancer patients with money and gifts to help make their lives a little easier.

This year Volkswagen got involved by auctioning off its first limited edition 2017 #PinkBeetle to raise money for the Giuliana Rancic Fab-U-Wish foundation. Fab-U-Wish grants wishes for breast cancer survivors