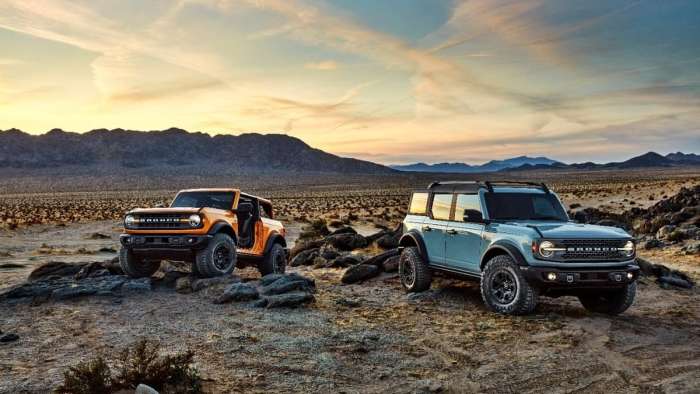 Ford has weathered its share of issues when it comes to the return of the legendary Ford Bronco. The launch of the anxiously awaited 2021 Ford Bronco was hampered by COVID and then the chip shortage. Since August, the shipments of the incredibly popular SUV were stopped because of an issue with the hardtops. Ford now believes it has the issue resolved.

The Detroit Free Press is reporting that Ford will begin shipping replacement hardtops to dealers as soon as this coming week. The dealers will then be able to contact the people who have already taken delivery of their new 2021 Bronco, so they can have the hardtop replaced.

Ford will also be able to resume production of the 2021 Ford Broncos with the new hardtop roofs. The delays have been hard on both Ford and its dealers. Customers are miffed by the delays and the initial quality issue.

The Problem with the Initial Bronco Hardtop

In July, Ford announced that problems were being reported with the Bronco’s hardtops that were exposed to extreme heat and humidity. The weather was changing the hardtop's appearance. The hardtops are built by Webasto, a Ford Motor supplier. Ford upper management was so angry about the issues that it announced, in August, that the company would replace all of the hardtops. However, Ford had to wait until the supplier could fix the problems, test and validate the new roofs and then produce them. There are thousands of customers that have already taken delivery waiting for the replacement roofs. There are also thousands of 2021 Broncos already partially built waiting for the hardtops so they can be sent to fill customer orders.

My colleague Marc Stern reported in August that the problems with the hardtops are forcing Ford to delay some of its planned production of the red-hot Bronco.

“Those customers still awaiting delivery of their Broncos will be notified of their delivery dates in the coming months. Ford may move some deliveries from the 2021 model year to 2022.

"As a result of continued roof challenges, we will be producing fewer 2021 model year Bronco vehicles than initially planned," Ford said in an online Bronco forum.”

Ford will contact customers when tops are ready to be installed. As of now, it is expected that the replacement hardtops will be sent to dealers so they can switch out the hardtops.