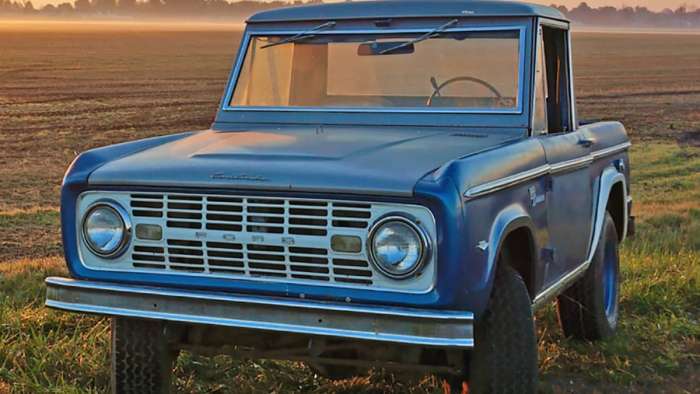 Ford reportedly had plans to add a Bronco pickup to the brand in order to extend it. However, when the automaker looked closely at the idea, it realized that there would be too many pickups, especially in the midsized range and so the Bronco pickup was shelved.
Advertisement

When Ford unveiled the Bronco brand a couple of years ago, one of the plans swirling around the platform was that there would ultimately be a pickup version to round out the lineup.

After all, the lineup contained the Bronco two- and four-door and the midsized Bronco Sport. Given this initial boost, Ford reportedly was thinking seriously of expanding the brand to include the pickup. However, according to Automotive News and Car & Driver, the Bronco pickup is back on the shelf for a couple of reasons.

First, there's no real need for the Bronco pickup. Though many could see it as a "nice thing to have," you can see it is repetitive when you look at it.

Second, given the size of the proposed Bronco pickup – midsized – there was no real call for it. If you had looked closely at Ford's fleet of trucks, you would have seen that the automaker was adding another midsized pickup, though it would have been under the Bronco brand.

The move makes sense. If you take a Wildtrack edition with the 2.7-liter engine you have a versatile, nimble vehicle says my colleague Jimmy Dinsmore.

Ford Had No Hard Plans For Bronco Pickup

It's not that Ford had hard and fast plans to build the Bronco pickup, in the first place. As noted, it was in the "nice to have" category. If it was to go forward, the early planning for the pickup said that it would go on sale in 2024. The primary reason Ford considered the pickup was to help extend the Bronco brand.

Admittedly, the initial offering of the brand was limited. As noted, the initial offering consisted of the full-sized two- and four-door models, plus the midsized Bronco Sport. No one knew just how successful the brand would be. At the moment, it looks like the Bronco brand is sold out for at least the next couple of years. Indeed, the brand doesn't need the added model with options like the Riptide edition that highlights the surfing life.

Almost as soon as Ford had planned to introduce the Bronco brand, the coronavirus hit. Ford had to shelve introduction plans, and production goals as the COVID-19 virus shuttered its plants across the country. Though there were stories about the new SUVs in online and print venues, the virus forced Ford to wait. It could neither build nor introduce the new brand in any significant way.

Interestingly, Ford referred to the Bronco brand from the start. Ford had signaled a change in its marketing approach with the introduction of the Mustang Mach-E. Instead of marketing the make as simply a Ford vehicle, the automaker changed its planning to make it an individual sub-brand. Of course, the change told customers that there was a new vehicle on the market, on one level. However, it signaled there would be other models of the sub-brand coming downstream at a deeper level. For the Mustang brand, for example, the Mach-E was the first Ford electric. However, Ford has added the GT version, with more in the pipeline. As you might expect, the Mustang brand also covers the automaker's internal combustion-engined versions.

How much competition would it have been? It would have left Ford with four pickups ranging from the compact pickup Maverick to the midsized Ranger to the full-sized F-150. And, it would have left the automaker with two midsized pickups competing directly. Ford believed that the added pickup would have cannibalized Ford Ranger sales. The result was the cancellation of the planned pickup. Ford saw the Bronco pickup's primary competition as Jeep's Gladiator. The Jeep Wrangler is the basis of the Gladiator.

The Bronco lineup will do quite well without the canceled pickup. Ford has plans for the brand's expansion over the next couple of years. To recap those plans, Ford plans to add a Bronco Hybrid and a Bronco Raptor performance model. The automaker also plans to have 100 standalone Bronco stores at dealerships across the country. As you can see, even without the pickup, Ford plans to extend the Bronco brand quite nicely.

And, even though there are teething problems with the Bronco that will delay shipments, Ford is working to iron them out.