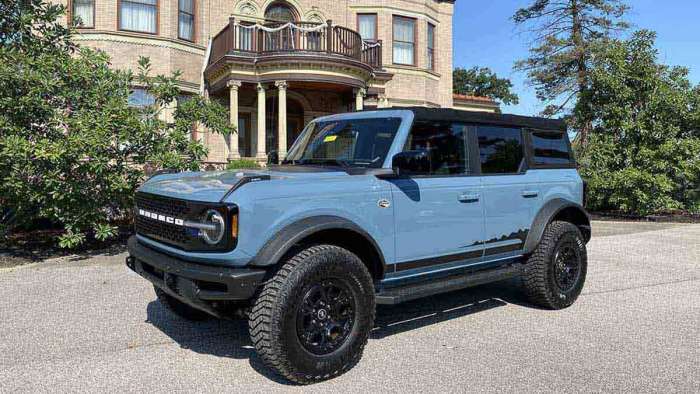 Ford Bronco Will Wrangle The Competition

2021 Ford Bronco Wildtrak with the 2.7-liter engine feels more athletic and more modern than the Jeep Wrangler’s similar V6 engine. Wildtrak with Sasquatch seems like a contender to win over the competition.
Advertisement

Like many of you, as an automotive writer, I’ve grown impatient waiting for my turn in the Ford Bronco. After a couple of opportunities fell through for me, one brief, but exciting opportunity presented itself to me. And of course, I took full advantage.

A co-worker of my wife was given a four-door Bronco Wildtrak as a loaner while his vehicle was in for service. Imagine my surprise when my wife Facetimed me showing off this Bronco in Area 51 paint color. I felt as if I had spotted a unicorn.

Thankfully, my wife’s co-worker let me take the Bronco for a quick spin. So what I write here is based upon my very first, early impressions, plus everything I’ve written about the Bronco here at Torque News. Also, I did not take the top or doors off or go off the road with this Bronco. That will come when Ford finally brings me a Bronco to officially review and give it a real test.

Related story: My official review of the smaller, baby Bronco – the Bronco Sport. 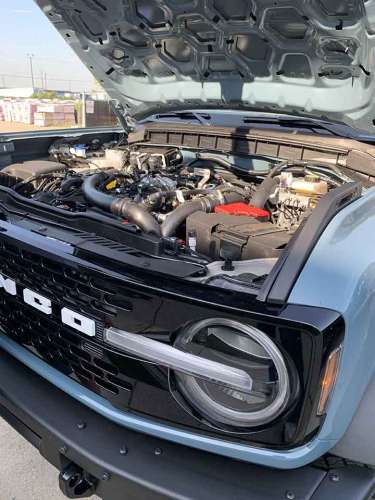 2.7-liter Ecoboost Engine
I hear some of the tiresome grumbles from the old-school Bronco enthusiasts who demand a V8 for the Bronco. That is just being stuck in the past and refusing to accept the wonders of modern automotive technology.

Of all the auto manufacturers, Ford has done wonders with turbo boosting smaller engines and maximizing the performance. In the bigger of the two Bronco engine options (there’s also a 2.3-liter Ecoboost 4-cylinder), the power is impressive. If this were a big pickup truck it might feel underpowered, but propelling this four-door Bronco with 330 horsepower is impressive.

Off the line, the Bronco felt quick and agile. Compared to the V6 Wrangler that I recently drove, this Bronco felt significantly quicker. Perhaps it’s the smaller engine in the Bronco that gets maximum effort. This is a newer engine than the Jeep’s Pentastar technology.

The optional seven-speed manual will appease those old-school enthusiasts but the 10-speed automatic covers everything with no noticeable turbo lag.

All in all, the Bronco feels like the better performer, even as a daily driver. 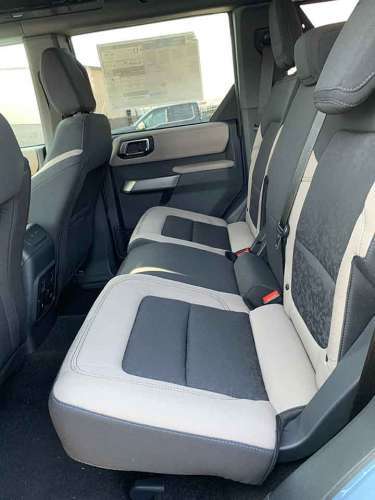 Interior and Technology
Here’s where the comparisons to the Jeep Wrangler really begin to split hairs. I felt like the interior of the Bronco was rather similar to that of the Jeep Wrangler. The Bronco felt a little fresher, but the vibe and look was quite similar to a Bronco.

Both interiors cater to the enthusiast. You won’t have lavish appointments, although leather is available. The Bronco I was in had cloth seats that were firm, but comfortable. The overall ride quality of the Bronco, on the 35-inch tires was quite similar to that of Jeep.

You don’t buy a vehicle like the Bronco or the Jeep for peace and quiet. You won’t find that with the Bronco. It’s a rougher ride, with a few noticeable cricks and road noise. Although every Jeep Wrangler I’ve driven was just as loud and just as bumpy.

The infotainment systems do everything you could ever want in both the Bronco and the Wrangler. The larger touchscreen and Sync4 gives the Bronco a slight edge over the smaller screen of the Wrangler. As much as I enjoy the Sync system from Ford, the Uconnect system in the Jeep is outstanding and intuitive too. 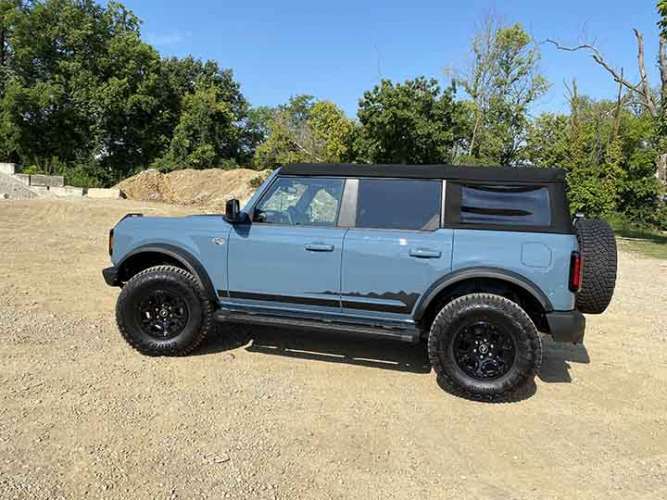 This is not my official review of the Bronco nor an apples to apples comparison. I was truly excited to finally get some wheel time in the Bronco and sit in it and push buttons. It gave me a good feel for what Ford has with the Bronco. And what they have is a major challenger to the Jeep Wrangler and the Toyota 4Runner.

Between GOAT mode, the adaptability of it and the four-door and two-door iteration, Ford has a winner on their hands. The Bronco, in whatever color you choose (although the Area 51 looks amazing as does the new Eruption Green) and whether you choose two doors or four will win over the hearts of the enthusiasts who have waited so long for the return of this icon.

Related story: Ford has nearly 190,000 reservations for the Bronco.

What do you think about the Bronco? Which color and iteration will you consider? Do you have a reservation? Share your build and comments below. Be sure to check out my colleague Marc Stern's story on why Ford chose to not go ahead with a Bronco pickup truck.