Bronco Sport offers bold colors, off-road ability and brings excitement to a bland segment. Ford did well with the “Baby Bronco” as it serves as hype ahead of the two-door and four-door Bronco.
Advertisement

Here’s how the conversation went down on my social media feed after posting photos of the 2021 Ford Bronco Sport.
Me: “I’m driving the Bronco this week.”
Them: “Wow that sure doesn’t look like the Bronco I know.”
Me: “That’s because it’s the Bronco Sport.”
Them: “I’ll wait for the real Bronco then.”

That’s a somewhat typical, although unfair, reaction to the brand new Ford Bronco Sport. This new entry for Ford in the compact SUV segment is nicknamed the Baby Bronco by some people. And in a way that fits, but in a way it’s unfair as well.

It starts the Bronco Sport off in the wrong way as the little brother and the lesser of the Bronco relaunch.

Without a doubt the two-door and four-door Bronco (aka the bigger Bronco) is legendary and we’ve been anticipating its relaunch for what seems like 10 years. The original Bronco is iconic. So then, where does that leave the Bronco Sport? 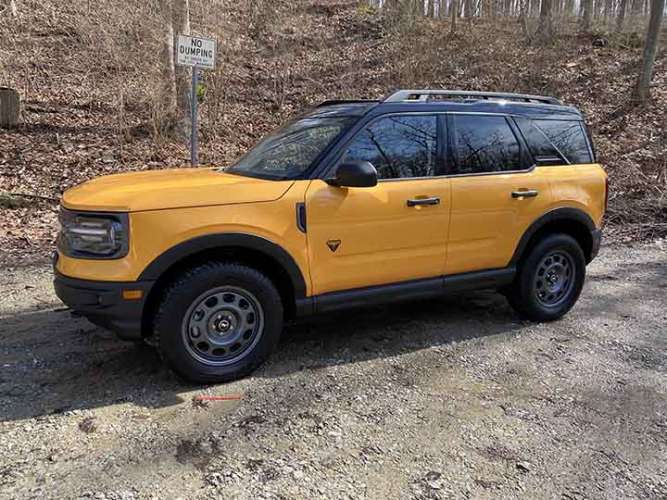 Certainly not iconic. But having spent some time with the Bronco Sport, I don’t want to brush it aside either. It has purpose and is an excellent new vehicle launch for Ford in a segment that is highly competitive.

Going against rivals like the Jeep Renegade and Jeep Compass and the Chevy Blazer, the Bronco Sport is important to Ford Motor Company. And I have no doubt they will sell a lot of these. Let’s take a look a closer look at the 2021 Ford Bronco Sport. 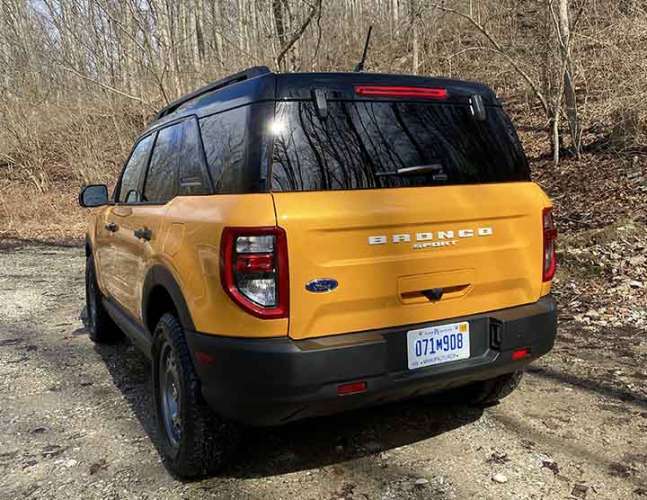 Round headlights (synonymous with Bronco) flank the bold Bronco nameplate stamped on the center of the grille. Slashed narrow LED lights lead out from the round lights giving the front end balance and essentially framing the Bronco nameplate. The front end is distinctive and instantly recognizable.

The back side has less distinction and less styling. The Bronco name is once again displayed in a big font, but the word sport is smaller and below it, showing that Ford is trying to capitalize (smartly I might add) on the Bronco name.

Roof racks and side rails complete the rugged appearance of the Bronco Sport as do active grille shutters and bash plates.

My tester was in a bold color called Cyber Orange. It was almost Yellow, rather than orange. But it’s the color palette available for the Bronco Sport that is whimsical and fun and also bold. Other color names include Antimatter Blue, Area 51, Fighter Jet Gray along with several other colors.

2021 Ford Bronco performance
Here’s where the rubber meets the road (or the mud in this case). There are two engine options for the Bronco Sport. Standard is a 1.5-liter three-cylinder engine with 181 horsepower. My tester was the Badlands trim which comes with a punchier 2.0-liter turbocharged four-cylinder engine that makes 250 horsepower and 277 lb.-ft. of torque.

Many Bronco enthusiasts are V8 purists and will scoff at a three-cylinder engine. Thankfully, I got to experience the turbocharged four banger and I was impressed. Off the line it’s impressive and on the highway it does a great job too. The 8-speed automatic transmission is good, but I was hoping for the 10-speed transmission that Ford has for other SUVs. There is no noticeable turbo lag. 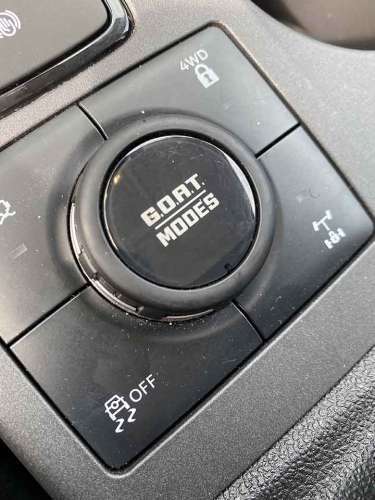 Does the Bronco Sport have GOAT Mode?
The answer is yes. What is GOAT mode? It stands for Go Over Any Terrain and it means that the Bronco Sport can go off the road capably. There are several terrains that the Sport can shift into with the turn of the GOAT mode dial including: slippery, sand, mud with ruts, rock crawl and even eco.

I did not test out the various features much but I’ve seen videos of the Bronco Sport crawling down the side of a rocky incline. So as far as other vehicles in this segment the off-road ability is one of the Bronco Sport’s biggest assets.

My colleague John Goreham testing the Bronco Sport in a snowstorm in New England and proclaimed it to be quite capable in snow. 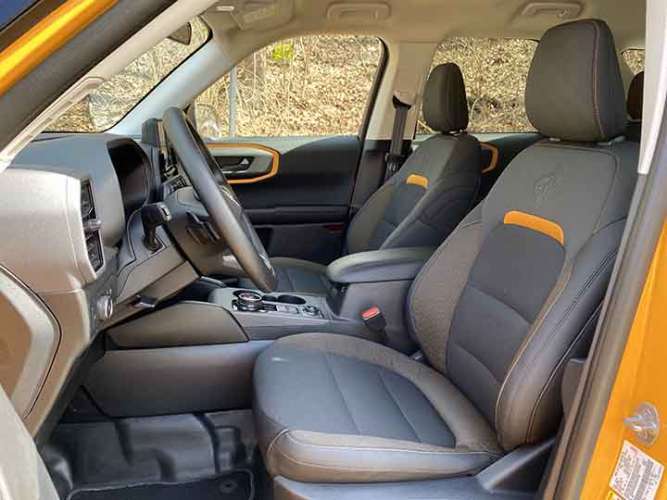 Bronco Sport Interior
The exterior styling and color is carried over within the interior and I love consistency like this from car designers. That adds intrigue and boldness to the interior. The front seats are comfortable and having the iconic Bronco emblem on the seats is a nice touch, and the same emblem is on the steering wheel too.

The back seat is small and cramped. Adults will not fit very comfortably and will want for legroom. Head room is okay but getting into the back is even difficult as the Bronco Sport’s rear doors don’t open wide enough. Again my colleague John Goreham felt that the Bronco Sport was right sized when he compared it to others in the segment. I will agree with him, except when it comes to the back seat. 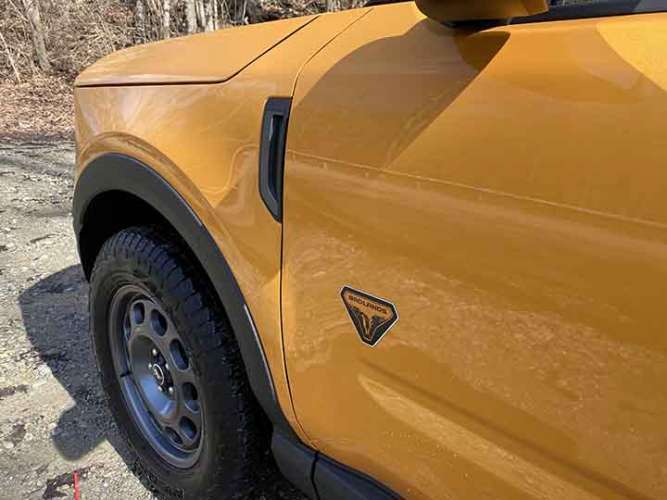 Trims and Pricing for the Bronco Sport
The Bronco Sport has five trims, each with hip, unique names that seem fitting for an off-road minded vehicle.
The five trims are: First Edition, base, Big Bend, Outer Banks and Badlands. Each trim has exclusive features that will draw consumers in. My tester was the Badlands trim which in addition to the bigger turbo engine comes with a locking differential, all-terrain tires, shock absorbers, skid plates and rubberized floor mats.

I love how each trim has its own perks and personality. This is a win for the consumer. Ford also offers five lifestyle packages to help customize the Bronco Sport.

The base Bronco Sport starts at $26,660, which is a little more expensive than the rival Jeep (but take my word that the Bronco Sport is much better and more interesting than the Compass). My Badlands tester had a base price of $32,660. The cool cyber orange was a premium color and added $595 to the price as did Ford’s Co-Pilot 360 Assist and 17-inch carbonized aluminum wheels. The final MSRP of the Bronco Sport Badlands was $36,340.

Fuel Economy for the Bronco Sport
The smaller three-cylinder engine Sports have slightly better EPA ratings with a 25/city and 28/highway rating. The faster (and dare I say better) turbocharged four cylinder has an EPA rating of 21/city and 26 highway. 2021 Ford Bronco Sport final thoughts
The Bronco Sport is the first Bronco on the car lots. It beats its big brother to the spotlight and does so in an impressive way. It was smart for Ford to get this baby Bronco out first in my opinion because it is an overall quality vehicle that has a lot of merit and interest for many consumers.

I don’t believe many of the people who have pre-ordered the full-size bigger Bronco would consider the Sport anyway, so it helps Ford cover a segment it needed help in. And the Bronco Sport plays the role well. Judge it for what it is, and not for what it’s not.

Leave me your comments on the 2021 Bronco Sport.