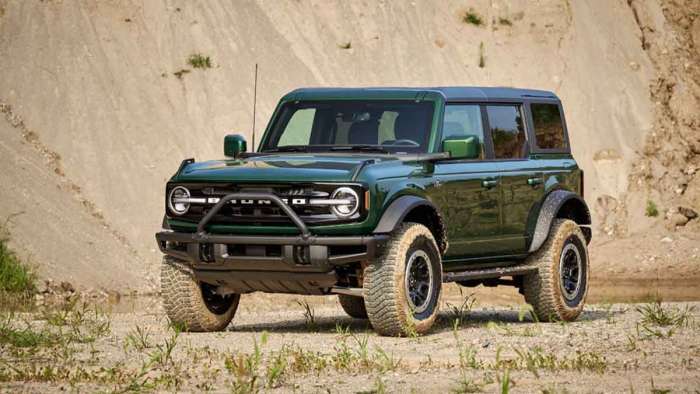 Two new colors with Bronco heritage history to come to 2022 Ford Bronco. Eruption Green and Hot Pepper Red will be available for every Bronco series in the lineup starting in 2022. Ford will showcase entire Bronco lineup and innovations during Woodward Dream Cruise weekend.
Advertisement

Every Bronco enthusiast has their favorite color from the iconic off-road SUV of the past. One such color that gives enthusiasts fond memories is the old Mallard Green. Ford just announced that they would pay homage to that legendary color with a new exterior paint coat coming to the entire Bronco lineup for the 2022 model year.

Ford Bronco color and materials designers developed Eruption Green Metallic as a modern interpretation of Mallard Green, which was featured on first-generation Bronco models in the early- to mid-1970s. 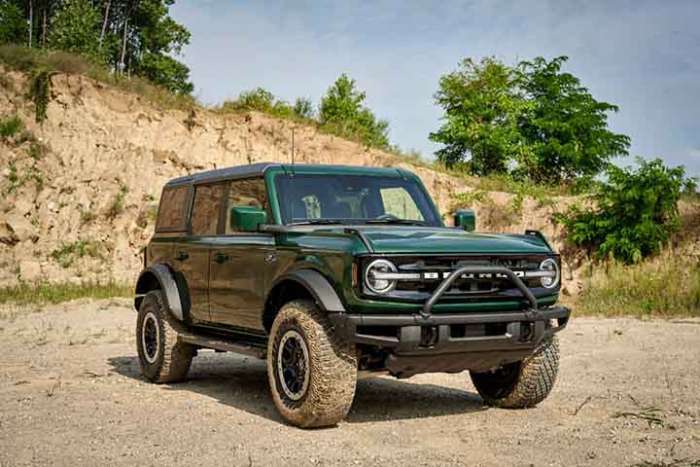 “Automotive enthusiasts, and especially Bronco fans, are passionate about colors and will be excited about Eruption Green,” said Barb Whalen, Ford color and materials manager. “Paint has a wonderful way of evolving because of technology. Eruption Green is a contemporary color, but there’s a connection with Bronco heritage. It’s evergreen-inspired, with yellow highlights that really tie it into nature.”

The first-generation Bronco (1966-1977) is the featured vehicle at this year’s Woodward Dream Cruise. Bronco brand took the opportunity to debut the new Eruption Green color to the audience at the world’s largest one-day automotive event, as well as the new-for-2022 Hot Pepper Red Metallic Tinted Clearcoat.

Both Eruption Green and Hot Pepper Red Metallic will be available for every Bronco series in the lineup.
Antimatter Blue, Lightning Blue Metallic and Rapid Red Metallic Tinted Clearcoat will be available exterior color options until the end of the 2021 model year. Orders for 2022 Bronco two- and four-door, including with Eruption Green and Hot Pepper Red, will open later this year.

Speaking of the Woodward Dream Cruise, Ford is making a huge presence at this popular event. The Bronco once again will be front and center as Ford’s Built Wild vehicles will be showcased during the event this weekend. 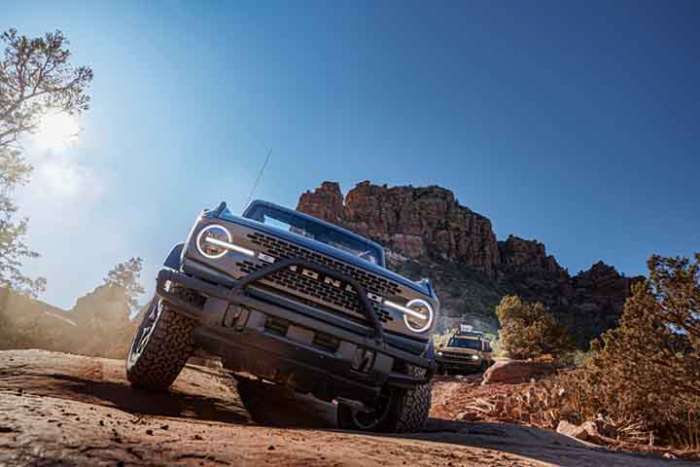 High-Performance Off-Road Stability Suspension (HOSS)
How can you not love this acronym known as HOSS?

The HOSS systems up the off-road ante further on Bronco and Bronco Sport models such as Badlands series, or the Sasquatch off-road package available on the two- and four-door models. The systems feature heavier-duty off-road-tuned dampers, as well as end stop control valve technology to increase impact absorption and further improve high-speed pitch control.

“We listened to what off-road enthusiasts wanted in terms of capability and control – and heard a lot about what could be improved in the current off-road SUV offerings – namely harsh ride, sloppy steering and discomfort above crawling speeds,” said Mark Grueber, Bronco consumer marketing manager. “Our answer was to design a lighter, more agile suspension system tuned to deliver more confident off-road capabilities without having to trade comfort and control.” 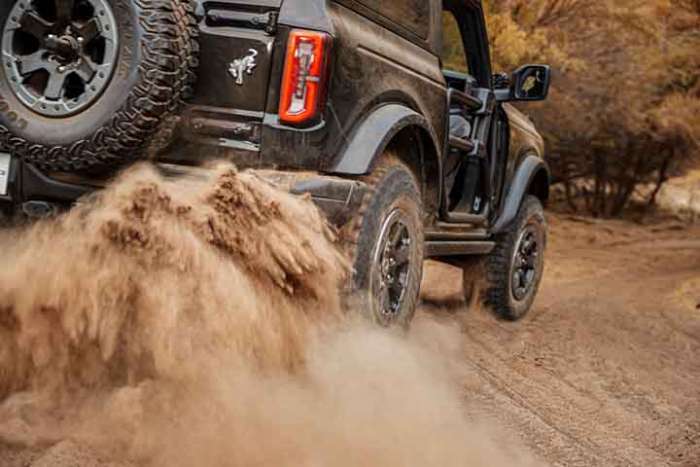 Bronco two- and four door SUV: Legendary HOSS capability
With a legacy of innovating the off-road landscape that began in 1966, the all-new 2021 Bronco two-door and four-door models deliver a strong, undisputed statement with their high-speed off-road capability and confidence, like surefooted wild horses running in the desert.

This modern off-road design reduces unsprung front axle weight up to 20% – or up to 42 pounds – over competing solid front axle designs for a far superior ride and more consistent tire-to-surface contact. And with the three-mode electronic-assist rack-and-pinion steering, it offers better on-center steering and precision on-road and off-road while minimizing steering wheel kickback.

Check out this video of the HOSS system in action.

“This design combination of low-mass, high-compliance chassis tuning improves high-speed off-road confidence and lets drivers ‘get on plane’ across a series of whoops like you see with trophy trucks,” said Jamie Groves, Bronco engineering manager. “And when it comes to rocks, we get significant levels of articulation to crawl through extreme terrain.”

Related story: Bronco off road ability to be showcased during Rebelle Rally.

Have you ever attended Woodward Dream Cruise? What do you think of Eruption Green? Leave me your comments below.

Paul Atmajian wrote on August 21, 2021 - 10:19am Permalink
The green color is a good idea. Not only is the color itself fantastic l, but it does look authentic When comparing to the Bronco of 50 years ago. However, I would have taken the green in a different direction. I would have done what no other American automaker in history has ever done and named that green British racing green. Another consideration if one is thinking along the lines of in-your-face moves to Range Rover would be to offer a normally aspirated four-cylinder version of the Bronco with the green color,, with a massive air filter, oil filter, and cooling system, and call it the Africa Edition. While I realize that this angle it's not true retro Bronco idealogy. It makes that in your face statement about we're going to do authentic Range Rover better than Range Rover Land Rover now. That's very legitimate, because they left that niche and went in the luxury direction. So this idea of the all capable indestructible vehicle suited for their toughest places in the world is a fine competitive space for the Bronco. It's not just a United States retro thing.