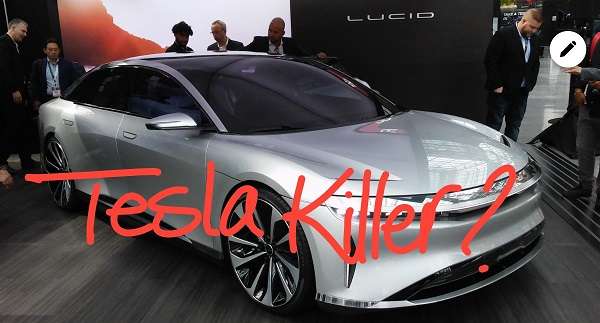 Lucid vs Tesla: Why Tesla has something to worry about

Lucid has made a splash recently with its streamlined sedan and 1000Hp electric car claim and when it comes to comparing with Tesla it stands as a serious challenger to Tesla Motors. I was able to see the car up close on Wednesday at the NY International Auto Show at the Javitz Center in New York City. If you have the opportunity I strongly recommend a trip in to see all the cars from all the automotive giants.
Advertisement

My first impressions of the car is pretty simple. Its another electric sedan. Its going to be targeted to the extremely high priced consumer and there are many, many choices in the high-end car segment. While driving to work every single day on the very crowded Route 80 in Northern New Jersey everyday, I truly believe the sedan market isn’t as large as the SUV market.

Tesla vs Lucid
I believe strongly that is why Tesla has chosen to try and enter this market with the Model X. Whether you like the Model X or not, the Tesla has had some cannibalized some of its own business. I personally know people that have traded in their Model S for a Model X. The Volvo representative I spoke with also confirmed to me that the SUV market is outpacing the Sedan market so why bring in a Me Too competitive entry into the same space?

The Lucid is targeting performance and their marketing director told me they are working on Active Suspension which should give the car exceptional ride and handling capabilities. We won’t see the car until 2019 and they are improving the car everyday with their prototypes. The issue I see is that the automotive market is changing extremely fast. Tesla is having their unveiling of their all electric truck by September. Tesla was noticeably absent from the NY International Auto Show.

According the Lucid they are working on the drivetrain entirely in house. I recall Tesla went down this road with the Roadster and struggled with this and it cost them valuable time to market. Will this happen to Lucid? The capital needed to start a car company is significant and delays maybe tough to overcome.

According to the Lucid Air website “Taking a unique approach to the drivetrain, the Lucid motor and transmission have been designed as a truly integrated system. Entirely developed in-house, the resulting solution is smaller, more efficient and more power-dense than competitors, while potentially more reliable.

Potentially more reliable? I’m interested in this. How is it more reliable? What efficiencies are there in the drivetrain in terms of kw/mile efficiency? I’m curious as to what this will be and whether or not they can truly innovate to achieve a greater kw/mile number.
Their website also explains why in my view, electrification is the future rather than hydrogen in conventional everyday driver situations. They state: “Nearly ten years of battery pack development have led to best-in-class energy density. Our battery is capable of 1,000 horsepower and enabling up to 400 miles of range. Additionally, a unique battery chemistry provides breakthrough tolerance to repeated fast-charging.”

The re are a couple of statements in there that need to be unpacked. First of all, 400 miles of EV Range. So far, the retrofitted Tesla Roadster can go that far on a charge. Toyota has been staking a claim that the Mirai(Hydrogen car from Toyota) can go 300 miles and fill up in 3 minutes. Well, again EVs will beat the range of Hydrogen at this point, however, I’m not comfortable with the idea of fast charging an EV battery pack in 3 Minutes to give you 300 miles. 400 miles of range is exceptional and perfect for a high priced electric car as the market can accept it. Since the Chevy Bolt now has 240 miles of stated EV Range which can be refilled every night in your driveway.

Competition Drives EV Range Increase
The increase in EV Range for the next generation of EVs is far greater than the average daily driving of Americans. I’ve discussed this previous articles and will continue to do so as it is an issue that will come up again and again. You can review the Bolt article here:

From that article... So why would I think that the Chevy Bolt would Cannibalize Chevy Volt sales?
We all know that the gas engine kicks in after the 50 miles of range in the Chevy Volt with the range extender making it a long range car. Previously, I’ve written about the facts and figures of Chevy Volt drivers that show a very high percentage of the time the Chevy Volt stays within the Electric mode of driving thus validating the original design idea of 40 miles of EV Range which is the average daily driving miles of Americans. The Chevy Volt does have an appeal to people that want to drive electric around town but once or twice a year drive a kid away to school someplace far from home or go to see relatives or some other reason. So if we look at the difference between what happened with traditional drivers that drive over the 40 miles average (range of the average consumer) it seems to me that we're looking at a huge difference in terms of what the Chevy Bolt will do to Chevy Volt sales.

Inevitably, the Lucid Air will likely eat into Tesla sales and split the high end EV Market. Their production improvements are just claims at the moment and we can only hope their become reality. I’m looking forward to all the innovation that they can achieve and increase Range will be rewarded in the marketplace.

In terms of fast recharge times, I must state that as an EV owner and plug in hybrid (PHEV) owner, fast recharge times are an expectation which needs to be explained. There are very few times that I wish I had a 480v fast charger at my home. There always seems to be a time when I get home and find out I have to turn around and go right back out again within an hour to a meeting or whatever. Faster recharge times when you have long range EVs become less and less of an issue as the range expands.