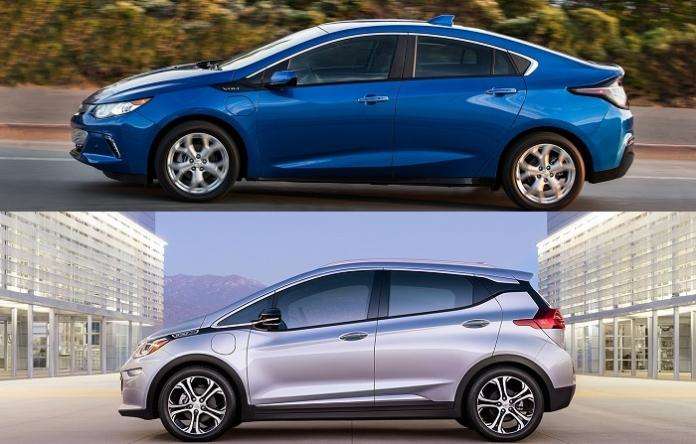 Chevy Volt vs Bolt EV From A Volt Owner's Perspective

First a disclaimer about comparing Chevy Volt vs the Bolt EV: I leased my first Chevy Volt in August of 2012. Before the next month ended, my wife leased one as well. About a year later my Chevy dealer hired me as its first EVangelist.
Advertisement

We have had five Chevy Volts in our household. We’ve loved them all, and I, perhaps, have become obsessed with them. As a salesperson at the Chevy dealership where I’ve picked up all our Volts, I was excited about the arrival of the Chevy Bolt EV. I just knew this would be a tipping point for electric automobiles in the U.S.

Although its appearance was not appealing to me, what I had learned, through Volt ownership, caused me to expect strong sales and the continued migration of buyers from internal combustion engine (ICE) vehicles to plug-in vehicles. I knew I would not be interested, as I’ve felt the Volt is the perfect car for today’s electric charging infrastructure. I charge at home and (fortunately) at work, but almost never anywhere else. The Volt gives me the freedom to do that. It also allows me to take long distance road trips, without range anxiety. I have driven from the Dallas / Fort Worth area to Chicago and back, in my 2012 Volt. We recently drove our Volt 670 miles, round trip, to follow our daughter, in her Volt, to college. Due to where her university is located, this trip would have been impractical, if not impossible, in the Bolt EV.

I am relatively small in stature and the Chevy Volt’s dimensions fit me like a glove. My 2017 is my private jet. I love it.

Then the Bolt EV arrived

Its styling reminded me of the Chevy Spark or Trax. Not my cup of tea, but a step in the right direction for those who prefer a crossover or small SUV, like the Equinox. Due to the battery pack’s location, beneath the vehicle, in a flat configuration, the driver is seated higher than in the Volt and feels less sporty, due to that. However, it has some features I would love to have in my Volt: what I call the “drone view camera” and the rear view mirror/display. These two features are only available on the upper level “Premier” Bolt EV.

The “drone view” is nothing new. It displays a simulated view from above the car, allowing the driver to see obstacles that might otherwise go unnoticed. It’s a computer-generated composite image of four cameras around the perimeter of the Bolt EV and is quite handy.

Car dealerships like to have their inventory lined up perfectly, which usually requires two people: one to park the cars and one to guide the driver into alignment with the other cars. The “drone view” allows a single person to line up the tip of the car (front to rear) with any existing line on the ground, like a concrete seam or fire lane stripe.

The really cool thing about it is you can see clearly behind you, even if the back of the car is filled to the ceiling with cargo! It takes a little getting used to, though. After years of driving, you unconsciously have trained your eyes to focus, through the rear view mirror, to the cars behind you. That reflected distance can be thirty feet or more. When in the video display mode, your eyes have to focus at the distance between you and the surface of the display, which is less than two feet. The first two days I drove the Bolt EV, when I’d glance up to check the display, it would take a split-second for my eyes to adjust. That’s not a long time, but it is noticeable. Now that I’m used to it, I want it for my car. Desperately. With 56.6 cubic feet of storage, when the rear seats are folded down and 119 MPGe, I expect the Bolt EV to become very popular with delivery service companies.

Some of the advantages of the Bolt EV that I did not expect were handling and roominess.

The battery pack is a 60 kWh pack, which is very heavy. It gives the Bolt EV a very low center of gravity and smoothes out bumps in the road. Part of my standard test drive, is cornering at fairly high speed. The Bolt EV can handle up to .85 Gs in lateral acceleration, in a turn. Not that long ago, that kind of performance was the realm of high-end sport cars.

The roominess is helped by two things, the battery pack not being in the passenger compartment (like it is in the Volt) and the thinness of the seat cushions. Just about every review you can find on the Bolt EV will mention that it looks like a small car, from the outside, but has surprising roominess inside. I knew this before I sat in one, but the reality of experiencing it was surprising, nonetheless. However, the seat comfort (or lack of it, for some) has been a deal-breaker for potential buyers. The cushions are half the thickness on those found in a traditional Chevy and the bolsters are snug, even for someone my size. I find that handy and comfortable, since I enjoy quick cornering.

There are some items, that my Volt has, that are missing from the Bolt EV. One is voice control of the radio. The only voice commands the driver can give, to the car, are OnStar-related. I just cannot understand why this would be left out of the Bolt EV. I find it much safer to press a button and say, “Tune XM Classic Vinyl,” instead of having to look away from the road to select a radio station. The other item missing, and most people probably won’t care about it, is assisted parallel parking/back-in perpendicular parking. I love this feature on my Volt and look forward to parallel parking opportunities. Once the system engages, I put my hands behind my head and let the car do all the steering.

How has my exposure to the Bolt EV changed my feelings about my Volt? Now, the snugness of the Volt’s interior (by comparison) makes me think of it as my personal jet fighter, instead of my personal jet.

The other, unexpected thing is: I no longer have any qualms about the Bolt EV’s outside appearance.

Paul GOVAN wrote on August 25, 2017 - 9:30pm Permalink
The 2017 Volt has cut your annual gasoline spend by how much - compared to a similar ICE car ? 80% or thereabouts ? How often do you have to visit gas stations ? Are you a fairly average driver - mileage-wise ? ie. less than 50 miles on 300+ days of the year - so driving on pure electric most days ? And is the 2017 Volt genuinely and significantly superior to early versions ? As a "Volt EVangelist" I would have expected you to give us those basic details. Paul G(EVUK)
Luke Warm wrote on August 25, 2017 - 11:39pm Permalink
Two Volt owner here "Dusty and Dusty Too"!on voltstats. Heard the news that GM was unveiling the Bolt concept car at the 2015 Detroit International Auto Show and at the last moment bought two round trip tickets to fly there from Texas just to see it in person. I created a hazmat situation inside the convention center when I saw it, having drooled all over the floor. I'd LOVE to buy a Bolt to replace or supplement Dusty Too, but the experience with the dealership (located between Midland and Fort Worth) has been so dissapointing, I started doing my own oil changes in my Volt because this dealership treats Volts as if they are the bastard stepchildren on their lot (when on rare occasions they might order one and place it in the far back corner of the lot. Bolts and Volts are incredible cars, we just need more forward thinking dealerships (like in Grapevine) to give these cars the treatment they deserve (as well as the customers who buy them.) Sadly, we were forced to a different brand other than a GM product because of the attitude our local Chevrolet dealership has here "That ain't what grand daddy dun drove."
Jay wrote on July 14, 2018 - 3:37pm Permalink
We traded in a 2015 Toyota Corolla S that got 35 MPG on the highway for a 2017 Bolt EV. The Bolt EV's main problems are the limited range (240 miles) and lack of on-the-highway charging infrastructure. Level 3 chargers are relatively rare and they can give you about 90 miles of range in a half-hour of charging. But it's expensive, if you can even find one that actually works. That means with only Level 2 chargers, one of which we installed at our home and charges at around 30-40 miles/hour), you drive 3.5 hours (65 MPH x 3.5 hrs = 227.5 miles), charge for 7. They cost about $700 plus installation, which will be my entire gasoline savings in one year. The dealer gives you a Level 1 charger with the purchase of the car that you can then plug into any 120V household outlet charging at the ridiculously low rate of 4 miles/hour. To recharge it from nearly empty, it would take you at least 60 hours or 2.5 days!!! Let's just say that the Level 1 charger will tell you what time it will be done, just not the day. Here in Texas, we have high temperatures and highway speed limits. You can't expect to drive 60 MPH on a 75 MPH road (on IH-45, for example, and it's even 80 MPH west of San Antonio on IH-10) without getting run over. Efficiency goes way down, approaching 3 miles/KWH at those speeds. And air conditioning consumes a lot of electricity, too. Remember, you only have a 60 KWH battery! Our average efficiency in Houston is about 4.2 miles/KWH. Sure, you can get 5-6 miles/KWH at 30 MPH, but you could also walk and use even less. This makes the Chevy Bolt EV is a commuter car plain and simple. If you buy one, you will need to have another car for road trips. One more thing, the interior of car is roomy but you can only put in 2 regular, child, car seats in the back and the trunk is tiny.